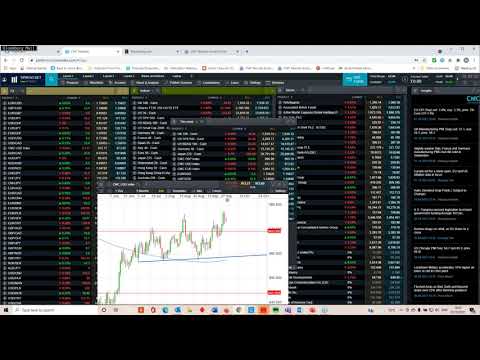 In this week's video, Michael looks back at Q3 and assesses the outlook for markets as we enter Q4. He looks forward to the US non-farm payrolls report, as well as Tesco's latest numbers and key levels on the FTSE 100, DAX, GBP/USD and Brent crude oil.

There was widespread expectation last month that the RBA might delay its decision to start tapering its weekly bond purchase programme from A$5bn to A$4bn a week, due to the various lockdowns being imposed by the Australian government. While this didn’t happen, the bank was careful not to rule out the prospect if economic conditions worsen further. The central bank instead extended the horizon for tapering into February next year from November, reflecting the concerns that any recovery was likely to take longer due to the various lockdowns. As we look to this week’s October meeting, the outlook for the economy hasn’t markedly improved, although that isn’t surprising given that a lot of restrictions still remain in place. This suggests that nothing much will change this week, with the bank likely to reiterate that it will remain supportive of the economy, which could bounce back once vaccination rates increase and restrictions ease amid warmer weather.

The latest flash PMIs from France, Germany and the UK saw further sharp slowdowns in September, with rising costs and weaker consumer confidence leading to weaker economic activity. The US economy also saw further weakness in its services sector during September, despite falling jobless claims. However, it appears that increasing concern about higher prices, not only in energy but also more broadly as companies pass on higher costs, is continuing to weigh on economic activity. While rising costs have been most notable in the UK and the US, we are now starting to see cost increases in French and German supply chains, as shown by sharp rises in the headline CPI rate since July. These concerns already appear to be causing concern at the Bank of England and US Federal Reserve. It probably won’t be too long before we start to hear louder rumblings at the European Central Bank.

Greggs has done well from the pandemic, its shares hitting record highs earlier this year. In August the company reported a half-year pre-tax profit of £55.5m, a significant improvement on the £65.2m loss from the same period in 2020. The results were also better than those recorded pre-pandemic in 2019, with the company expanding its number of stores and improving its online offering. Greggs opened 48 new stores in the first half of 2021, and plans to open another 52 stores by the end of the year, with delivery sales now accounting for 8.5% of shop sales. Total sales in the first half were almost back to pre-pandemic levels with management saying that they expect full-year profits to come in ahead of previous expectations. The recent decline in consumer confidence might see sales slow during Q3, but consumer appetite for pasties, sausage rolls and doughnuts generally tends to be resilient even when times are difficult. We should also be aware of higher costs, with Greggs saying that some products containing chicken were missing from its shelves at the end of August, and that it had seen temporary interruptions in its supply chain.

PepsiCo’s Q2 numbers, released in July, came in well above expectations. Net sales rose over 20% to $19.22bn as the reopening of restaurants, bars and leisure venues, prompted a surge in demand. Profits also surged, coming in at $1.72 a share, or over $2.36bn. In response to rising costs, the company said it would probably have to raise prices after Labor Day (6 September), although it also raised its guidance for the year. In August, the shares hit record highs after PepsiCo said it had agreed to sell its Tropicana and Naked juice brands to private equity firm PAI Partners for $3.3bn, although it will retain a 39% stake in the business. It seems the rationale behind the deal is to shift focus away from sugary drinks towards the lower-calorie drinks market, as well as healthier snacks. Profits are expected to come in at $1.37 a share.

Supermarkets have been front and centre over the past three months – from takeover speculation in the wake of the Morrisons private equity tug of war, to supply chain problems and the delivery driver shortage which affected their stores and petrol stations. Costs for the major supermarkets have already risen sharply over the past 18 months, as Covid-19 led to extra staff being hired to upscale the online delivery side of their businesses. As a result, margins seem likely to be squeezed further. However, Tesco is better placed than some of its rivals, since the negative impact of the slowdown in food sales following the reopening of restaurants, pubs and cinemas is partly offset by its Booker operation, which caters to the leisure economy. One of the main growth areas for Tesco has been online sales, which doubled in capacity to 1.5m slots a week over the past 12 months, boosting sales by 77%. In Q1, demand remained high at 1.3m orders a week, with two-year sales growth of 81.6%. Group like-for-like sales rose £13.36bn in Q1, with the UK operation accounting for £10bn of that number. Despite this strong performance in Q1, management adopted a cautious tone regarding the rest of the year. This didn’t appear to sit well with investors, with the shares struggling to rally in the days afterwards. But the negativity didn’t last long – since early July, the shares have risen by over 10%, with the potential for further upside. As we look towards this week’s half-year numbers, the latest Kantar sales figures show that food sales continued to fall in the 12 weeks to 5 September, while prices increased 1.3% from the same period a year ago. Bucking the trend, Tesco and Waitrose saw their sales numbers rise for the period, though Tesco sales rose by only 0.2%.

The lockdown-related closure of bars, pubs and restaurants has hit sales across all of its brands, even after taking into account increased sales from supermarkets, off-licences and liquor stores. Sales in Corona beer have recovered after decreasing at the beginning of 2020. In Q1, beer sales rose 14% to $1.57bn, which was slightly down from Q4’s 16% growth. Excluding Canopy Growth, profits came in at $2.51 a share. However, when data for Canopy Growth is included, the company slipped to a loss of $0.18 a share. Sales in its wine and spirits segment was disappointing with sales decreasing 22% to $454.5m, although operating margins have improved, rising 50bps to 35.7% across the business, led by the beer segment. The company has been divesting various parts of its wine and spirits portfolio. In June, the company outlined that it hoped to achieve 7% to 9% in net sales growth for the beer segment and 2% to 4% in the wine segment for the new fiscal year, while updating its earnings guidance. The shares are currently trading close to their lowest levels this year, with consensus estimates for profits of $2.79 a share for Q2.

After two quarters in which decent online sales were weighed down by an instore business that struggled as customers stayed at home, Levi Strauss Q2 numbers came in much better than expected. Revenues for Q2 came in at $1.28bn, a rise of 156% from the previous year, while profits came in at $0.23 a share, both of which exceeded expectations, boosted by strong demand in the US and China. The company also upgraded its full-year revenue and profit outlook, assuming no further deterioration on the Covid front. Management said they expected Q3 sales to surpass pre-pandemic levels, having raised their forecast in July. E-commerce sales have performed especially well, up 75% in Q2 compared to the same period last year, and now accounting for about 25% of all sales. For the second half of the year, sales expectations are for a rise of 28% on a like-for-like basis. Profits are expected to come in at $0.37 a share.

Like airlines, the cruise ship industry has had a torrid 18 months, as the resumption of normal service has been repeatedly pushed back. In April, the company reported a Q1 loss of $1.95bn, a slightly bigger loss than was expected. Despite this, management said that they have enough liquidity to get back to full operations fairly quickly, with bookings 90% higher in Q1 than they were in Q4 of last year. More encouragingly, bookings for 2022 were ahead of what was a very strong performance in 2019. In Q2, the company reported a loss of $2.1bn. However, Q3 is expected to bring an improvement due to the resumption of cruises at a number of its brands over the summer, including UK cruises. In July, Carnival said that it hoped to have more than half its fleet sailing by the end of October, offering cruises to vaccinated travellers only – a figure it reiterated in September. The company hopes to increase this proportion to 65% by the end of the year. For Q3, the company expects to see losses stay at recent levels of $2bn, with the proviso that they could go higher in Q4 on the back of additional spending on restarting operations. The company continues to expect a cash burn of $510m a month, a slight increase on June levels. Losses are expected to come in at around $1.39 a share.

While many analysts expected a dip in US hiring in the August payrolls report, few people expected a sharp slowdown to 235,000. While there was an upward revision for July to over 1m, the initial reaction to the August figure pushed any thoughts of a tapering of the US Federal Reserve’s bond purchase programme to the beginning of next year. The fall in the unemployment rate – which dropped to 5.2% – was welcome, while yearly wages rose 4.3%. A key area of concern in the August report was the hospitality sector, where hiring activity almost ground to a halt amid a rise in cases of the delta variant. A sharp drop in consumer confidence and warnings from US airlines of falling passenger numbers also weighed on sentiment. With the expiry of emergency unemployment benefits on 6 September, expectations are high that this week’s September report will see a significant improvement on the August numbers. Job vacancies still remain at record levels of over 10m, while the Fed’s focus appears to have shifted to concerns about rising inflationary pressures. Speaking at the most recent Fed meeting, Fed chair Jay Powell said that a semi-decent payrolls number this week needn’t be a barrier to the start of tapering this year, and possibly as early as next month. This of course raises the question of what constitutes “semi-decent”. Is he talking 400,000, 500,000, or a repeat of August? The hawkish shift at the September Fed meeting has certainly moved the bar and could potentially prevent the Fed from starting the tapering process. However, with prices already running higher, there are some concerns that the Fed may well be playing catchup. Expectations are for 510,000 jobs and for the unemployment rate to fall to 5%. It is also worth keeping an eye on the ADP report two days before, which saw a similarly low reading in August of 374,000.