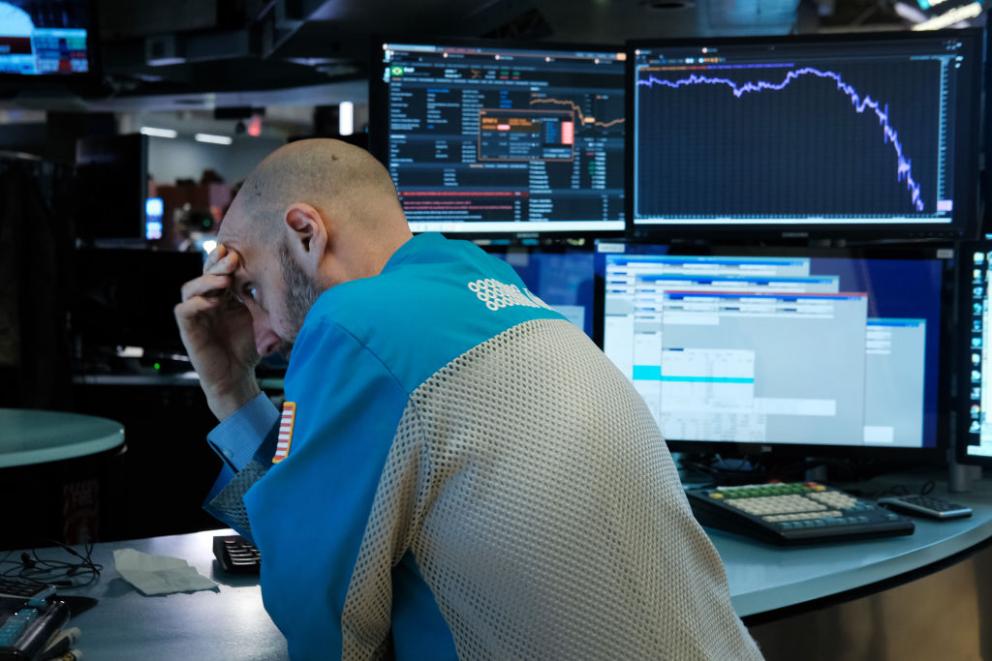 Bond markets have stabilised today, with yields continuing to fall from their intraweek highs, while European equity markets have finished the month very much on the defensive, with sharp falls across the board. Today’s declines haven’t been enough to wipe out the gains seen this month, even though the FTSE 100 has posted its worst one day decline since 29 January, when it also fell quite hard.

While bond yields have retreated from their highs for the week, there is still a fair degree of uncertainty about their overall future direction, in light of the rapid speed of the moves seen in the past week or so.

The biggest decliners today have been in the basic resource sector, as weaker oil and copper prices prompt some end of week profit taking on the likes of BP, Royal Dutch Shell, Anglo American and Antofagasta, to name but a few.

On the plus side British Airways owner IAG which this morning announced a £6bn loss, and saw its shares slide back initially on the open, has finished a positive week very much on the front foot, hitting its highest level since last June, on optimism that it is well positioned for the reopening of the UK economy. It’s certainly been in the minority today when it comes to gains.

All in all, while this morning’s numbers were bad, they weren’t surprising either, given the damage wrought on the airline sector by the pandemic. IAG’s biggest problem however is not a pickup in passengers on an economic re-opening. It will still be able to benefit from the return of domestic passengers like its smaller peers EasyJet and Ryanair.

Its main problem will be getting the same levels of long-haul business travel that it had before the pandemic. This is where most big carriers make their money, and it is here that normal service may well take a little longer to return to the same levels they were in 2019. Markets don’t appear too concerned about that at the moment, however the shares are still below the levels they rebounded to in June last year, so there’s still plenty of potential upside in hand.

Property website Rightmove this morning announced that it was resuming its dividend, with a payment of 4.5p per share, as well as its share buyback program, despite seeing profits decline to £134.8m from £213.5m the year before.

Average revenues per advertiser which initially took a hit in the immediate aftermath of the first lockdown has been slowly recovering month on month.

Pets at Home, another business that has done well from the pandemic announced a continued strong performance in Q4, as well as upgrading its full year outlook for profit to come in at £85m, up from £77m.

US markets have picked up where they left off last night sliding back after initially opening slightly higher. The latest US economic data didn’t provide much in the way of a direction one way or the other with the February Chicago PMI coming in slightly short at 59.5.

Beyond Meat shares have been given a lift to the upside, after last night’s news that the company was signing a three-year deal with McDonalds for the McPlant, as well as signing a deal with Yum Brands to co-create a range of other plant-based items. This overshadowed disappointment that net revenues fell short of expectations, coming in at $101.9m, and posting a bigger than expected loss of $0.34c a share.

Airbnb’s first quarterly numbers as a publicly listed company were also well received by the market, showing Q4 revenues that were better than expected, coming in at $859m, above estimates of $739.7m. This was still a 22% decline on the year before but also showed that demand was more resilient than feared. The company still posted a net loss of $3.9bn due to associated costs arising from the IPO, however the outlook remains positive especially with a vaccine rollout gathering pace. People who want to travel prefer to avoid hotels which have communal areas, and look for a more contained experience, where there is an element of privacy.

The US dollar has swept all before it today with the biggest fallers being the commodity currencies of the Australian and New Zealand dollar. The move out of stocks is giving the greenback a safe haven bid, even as yields on US treasuries slip back further from their recent peaks.

The pound had been the worst performing currency in early trade this morning until Bank of England chief economist said he was concerned that the central bank was underestimating the risks of a sharp rise in inflation, and that complacency was setting in. This pulled the pound off its lows as financial markets start to price in the possibility that the next move in UK rates might be higher. Complacency is certainly a real concern, given that UK CPI tends to trend at much higher levels than the US or the EU for that matter. While the recent rebound in the pound will go some way to mitigating a rise in CPI inflation, it won’t completely negate it.

The recent rise in copper prices appears to have come to a shuddering halt, after a really big rise this month. The selloff is somewhat overdue given the extent of the gains that we’ve seen this month. On the plus side if we continue to slide back, concerns about rising prices, causing yields to rise might start to ebb away.

Next week will be a key test for copper, if we get further sharp declines, this might take the pressure off bond yields.

Oil prices are also under pressure ahead of next week’s OPEC+ meeting where there are rumblings that some of the smaller members of the cartel might break ranks and start upping their production capacity to take advantage of the recent run up in prices.

Gold prices have broken down through the $1,760 support level and last November's lows opening up the prospect of further losses towards $1,680, as the stronger US dollar and higher yields make it less attractive.