The Week Ahead: US non-farm payrolls; easyJet, Wise results 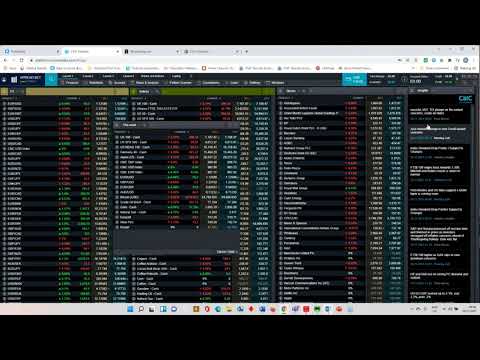 Read our pick of the top stories to look out for in the week commencing 29 November, and view our key company earnings schedule.

This week, Michael Hewson previews the closely watched barometer of America's jobs market, the monthly US non-farm payrolls report. He also offers insights on company updates from easyJet, Wise, Salesforce and others, and discusses a raft of upcoming PMI reports.

The last payrolls report showed that 531,000 jobs were added to the US labour market in October, the highest figure since July as Covid-19 cases fell, while the September figure was revised upwards to 312,000 from the previous estimate of 194,000. The data helped reaffirm the US Federal Reserve’s decision – announced on 3 November, two days before the jobs report – to start tapering its $120bn-a-month asset-purchase programme. The unemployment rate fell to 4.6% in October, down from 4.8% in September and 5.2% in August, while the labour force participation rate was unchanged from September at 61.6%. The numbers were seen as a positive development and, with employers offering higher wages and hiring seasonal workers over the holiday period, jobs growth is expected to accelerate as we head into year-end. This expectation is perhaps already playing out in the number of continuing jobless claims, a proxy for unemployment, which fell to 2.05m in the week ending 13 November, its lowest level since mid-March 2020 when it was 1 77m.

With recent data showing resilience in the US economy, the conversation around tapering has moved on to the pace of cuts. After their early November meeting, the Fed announced that it would trim bond purchases by $15bn ($10bn in treasuries and $5bn in mortgage-backed securities) a month, effectively ending the programme in the middle of next year. Minutes from that meeting, released on 24 November, reveal that some policymakers would like the central bank to go faster. If the upcoming payrolls report for November shows another month of strong jobs growth, it could add to calls to accelerate the wind-down of stimulus measures when the Fed meets in mid-December, though how this plays out given recent events with respect to the new Covid "Nu" variant is anyone’s guess. Due a few days before that meeting, the jobs report from payroll processing firm ADP is expected to show that another 500,000 private sector jobs were added in November, in line with similarly strong numbers for September and October. At the same time, the unemployment rate is expected to continue to fall, with the November figure likely dropping to 4.5%. Wage growth is also likely to be a feature of the upcoming jobs report, as anecdotal evidence suggests that retailers and other major US employers are increasing staff pay. If growth in average earnings, which stands at 4.9% over the past year, rises above 5%, we could see markets ramp up bets on possible interest rate hikes next year

For airlines, 2021 promised much but delivered little. The hope at the start of the year was that vaccines would herald a return to some sort of normality for a sector that has borne the brunt of pandemic restrictions. But the route out of the pandemic hasn’t been as simple as that. Ongoing travel restrictions amid the threat of new variants have contributed to EasyJet missing targets this year, which partly explains why the easyJet share price has plummeted almost 40% in the last six months, after early-year optimism pushed the stock above 900p in May. To shore up its finances, the company raised £1.2bn from a rights issue in September, reducing its debt to £900m from £2bn. That same month, the company revealed that it had rejected an unsolicited preliminary takeover approach from an unnamed source. Unconfirmed reports suggest that the suitor was rival operator Wizz Air.

In the 20 months since the first lockdown, easyJet has raised more than £5.5bn to bolster its finances. It has also sold and leased back 43 of its aircraft to raise extra cash, though it appears to have decided against pursuing this strategy any further, at least for the time being. For the six months to March, easyJet reported a loss of £701m. The second half of the year is unlikely to have significantly altered the company’s fortunes, given that it flew at only 17% of capacity in Q3 – the third successive quarter in which capacity has been below 20%. The situation improved in Q4, as easyJet said in October that it managed to operate at 58% of 2019 capacity during the quarter, flying 17.3m seats, slightly above what it expected in early September, and well above the 17% in Q3. Nonetheless, the Q4 figure still fell short of the 60% that easyJet had originally forecast. In a sign that easyJet is more optimistic about the financial year ahead, it raised its capacity guidance for Q1 from 60% to 70% of 2019 levels, though fresh travel restrictions in parts of Europe and the emergence of another new variant could throw this target into doubt. Full-year losses are expected to come in at around £1.2bn.

Money transfer service Wise, formerly known as TransferWise, has had a mixed few months since listing on the London Stock Exchange in July. Wise’s share price soared initially from its 800p direct listing price, peaking at 1,176.5p in September. Since then it has slipped to its current level of around 745p. In October, the company reported solid results as part of their provisional Q2 update, with revenue coming in at about £133m, up 25% year-on-year and up 8% on Q1. Growth was driven by a 22% year-on-year increase in the number of active customers, which reached 3.7m. However, the shares fell sharply in October on reports that three clearing houses were working with a number of major European and US banks to speed up cross-border payments – the area where Wise, like Revolut, earns most of its revenue. Then, on 22 October, Wise’s share price declined 4.9% to 808p after co-founder Taavet Hinrikus sold 10m shares at 815p, a 4.1% discount on the closing price in the previous session. Investors will be hoping for a change in fortunes when Wise reports its half-year results on Tuesday.

Customer service platform provider Salesforce benefited from the shift to working from home, partly thanks to its cloud-based service. Its acquisition of the business communication tool Slack in Q2 should be reflected in its quarterly numbers, starting from its Q3 update on Tuesday. During their Q1 earnings call, management raised their revenue target for this fiscal year from $25.7bn to between $25.9bn and $26bn, and in Q2 they raised it again to between $26.2bn and $26.3bn, with Slack set to contribute around $500m of the additional amount. The revised target represents a huge increase on last year’s revenue of $21.25bn, and drove the shares to record highs in August, after Q2 revenue came in at $6.34bn, above expectations of $6.22bn. It remains to be seen whether the $27.7bn price tag for Slack will be money well spent in the face of strong competition from Microsoft Teams, but for now investors appear content to offer Salesforce the benefit of the doubt The outlook for the next few months remains positive. Following the upgrade to full-year guidance, the company expects Q3 revenue to be between $6.78bn and $6.79bn, a rise of 25% from a year ago. Profits are expected to come in at $0.92 a share.

Although PMIs in Europe have likely peaked this year, it’s surprising that the numbers have remained in expansion territory when related industrial and manufacturing production numbers have been so poor. Germany, whose large automotive industry’s biggest market – China – has undergone a major slowdown, has delivered resilient PMI numbers despite weak factory orders data. With infection rates in Germany rising, we may see fresh lockdowns, potentially hitting the services sector. German manufacturing PMI is expected to slip to 57.6, down from 57.8 in October. In France, manufacturing is expected to reach 54.6, up from 53.6 in October. Outlier Italy posted a high reading of 61.1 in October, pointing to a possible decline in November.

Last week’s flash PMI numbers suggest that the UK economy may be performing slightly better than its European counterparts, though questions remain over the accuracy of the data which appear to overstate the health of the UK manufacturing sector. In services, we’ve seen a steady improvement, despite the impact of the “pingdemic” in August. As we head into December, the picture in the UK appears less concerning than in parts of mainland Europe. UK manufacturing PMI is expected to come in at 58.2, up from 57.8 in October, while UK services PMI is predicted to be around 58.6, down from 59.1 a month ago.

Management set high expectations at the start of their current 2022 financial year, expressing optimism that they would be able to grow the business to the point that full-year revenue would exceed $1bn, a significant increase on $553.8m in the company’s 2021 financial year. Snowflake’s share price, up more than 25% year-to-date, reflects that optimism – to the point where expectations might be running away a little. In Q1 the cloud-computing company recorded revenue of $228.9m, raising the bar for the remaining quarters. The Q2 numbers were a solid step-up, with revenue of $272.2m, taking the company halfway to that $1bn mark, though losses came in at $0.64 a share. For Q3, the company said it expected revenue of $280m and a full-year return of $1.06bn, upgrading previous projections. With more than 4,500 customers, the company now needs to look at turning a profit and establishing tighter control of its costs. Losses are expected to drop to $0.05 a share.

One of the key takeaways from recent updates by Walmart and Target has been investor concerns about higher costs weighing on profit margins. For retail chain Kroger, these concerns are likely to persist, with reports that some workers are calling for strike action to demand higher pay, claiming that the company has notched up billions of dollars in profits. In September Kroger warned of the risks of higher inflation, while trying to avoid passing higher costs onto its customers. For the fiscal year Kroger said it expects to earn between $3.25 and $3.35 a share, up from around $3. In its most recent quarter, the retailer generated a profit of $467m on revenue of $31.68bn. Management also warned that warehouse and transportation costs could rise in the coming months, with higher petrol prices also likely to weigh on margins. On the plus side, the business is investing in automation through its recent deal with Ocado. Q3 profits are expected to come in at $0.67 a share.

The services sector has been particularly exposed to the uncertainties of lockdown restrictions across the globe. In China, the sector has struggled as a result of restrictions and lockdowns implemented in October. PMIs in Europe have also trended downwards, with French, German, Italian and Spanish services PMIs declining from summer highs. The biggest falls have been in numbers from Germany and Italy. Last week’s flash PMIs suggest that this trend is on pause, with an uptick in economic activity in November. Given the recent surge in coronavirus infections, and renewed restrictions across Europe, the pause may be short-lived. As far as the US and UK numbers are concerned, they are likely to be much more resilient. This resilience could well be because the US and UK reopened earlier and, as a result, immunity levels among the general population are higher heading into winter.