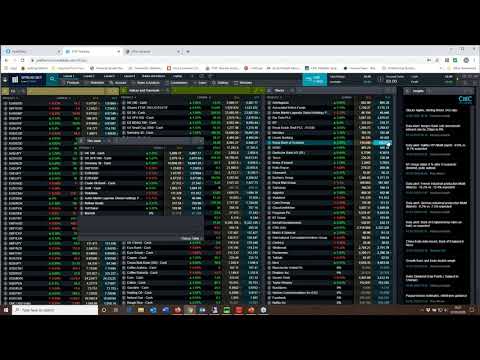 Watch our week ahead video preview, read our pick of the top stories to look out for this week (11-15 May), and view our key company earnings schedule.

In this week's video, UK chief market analyst, Michael Hewson, looks at the week's price action and key levels in equity and currency markets, while looking ahead to next week's Q1 GDP numbers from the UK and Germany. He also previews the latest China retail sales numbers, as well as earnings updates from Aston Martin, Balfour Beatty and Ted Baker.

Monday: The travel and leisure industry has been one of the hardest hit as a result of the spread of coronavirus across the world. In February, Marriott reported a profit of $0.85 a share, on revenue of $279m, which was a significant decrease on its numbers the previous year. Since its $13bn acquisition of Starwood in 2016, the hotel chain had seen its share price soar, helped by $16bn of buybacks to shareholders, which saw the shares hit new record highs at the end of 2019. Since then the sector has imploded, with lots of speculation about whether the hotel chain or its brands can survive on debts of $10.8bn and very little income in the short term. With hotel occupancy rates expected to fall to as low as 20% in April and May, and most of its employees furloughed, senior management are scrambling around to get funding to roll over their debts. In April, Marriott raised $1.6bn for five years at a rather hefty yield of 5.75%, as it looks to buy itself time to ride out the current turbulence.

Tuesday: It’s not been a particularly good last two years for Vodafone shareholders, with the shares losing half their value since the beginning of 2018, on a combination of concerns over rising debt levels, and underperformance across all of its divisions. Last year, the company cut its dividend due to its escalating debt. In November, Vodafone also took a £1.9bn loss due to problems in India, as a result of a court decision that ruled in favour of a government demand to pay $4bn, though management also raised guidance for the year after improvements in performance from South Africa, Italy and Spain. The acquisition of cable assets from Liberty Global in Germany was also expected to boost full-year revenue up to £15bn. The completion of a deal to create Europe’s largest towers portfolio with Italy’s TIM, has also yielded £2.1bn, as it looks to monetise its 61,700 Europe-wide towers infrastructure, as management look to reduce debt levels and ramp up the roll out of 5G.

Wednesday: It’s been a tale of woe for Aston Martin since its IPO in 2018. One profit warning after another has seen the iconic brand lurch from one disaster to the next, culminating in Canadian billionaire Lawrence Stroll stepping in to save the company from the disaster of administration. The coronavirus outbreak hasn’t helped either, with the shutdown of its manufacturing operations coming at a time when its new DBX SUV is being touted as the solution to its cashflow problems. The reopening of its St Athan manufacturing plant earlier this month will be a welcome respite, however Wednesday’s update isn’t likely to be too instructive when it comes to the sales outlook, given the company already has a decent order book of 2,500 cars. Part of the new strategy appears to be geared towards Formula One, as well as looking to take on Ferrari by building new supercars, including the Valhalla, and a new Vanquish.

Wednesday: There is little doubt that the UK economy is likely to contract in Q1, if the recent GDP numbers from other European countries are any guide. Even though full lockdown only happened towards the end of March, and there was a decent rebound in economic activity in January and February, after the Conservative party’s December election win, we are still likely to see a negative number. This is due to a combination of the effects of February’s flooding, and rising uncertainty in the lead up to lockdown, as grim coronavirus headlines started to hit our TV screens. This combined spillover led to retail sales in March declining  5.1 %, while service sector activity hit 34.5, a record low at the time, until April’s number beat that with a reading of just 12.3.

Wednesday: Over the last 12 months, Cisco Systems has been a steady source of income for dividend investors, despite seeing some disruption to its business in China last year, over China-US trade tensions. For its most recent quarter, the company reported profits of $0.77 a share, however revenue slipped back by 4% to $12bn, due to rising economic uncertainties. At the time, management expected that revenue could be expected to decline further in the upcoming quarter by about 2.5%, with profit expected to come in at $0.80 a share. Since then, we’ve seen significant global economic disruption as a result of the rolling Covid-19 lockdowns, hitting demand across the world, which means that consensus estimates have come down to $0.70 a share.

Thursday: The construction sector has been one of the weak links in the UK economy for some time now, however Balfour Beatty has for the most part managed to rise above the woes of its competitors. This is largely down to having been able to avoid falling into the clutches of Carillion in 2014. Since then, under the guidance of Leo Quinn, it’s been a long road back, with the company only focusing on high-margin work. This has helped hugely in maintaining a healthy cash flow, and saw profit last year rise 8% to £221m, when the company reported full-year numbers in March. A rise in the order book also helped net cash rise 68% to £325m. Despite this success, the shutdown of the UK economy at the end of March saw the company postpone the payment of a dividend, which was expected to rise by 33%. There is a chance the company may well defer this week’s update given the disruption to its business in Q1.

Thursday/Friday: Having been locked down in February, economic activity in the world’s second biggest economy has struggled to recover since then, with the Chinese economy contracting by 6% in Q1. Since the economy reopened there has been little evidence that Chinese consumers have felt inclined to reopen their wallets, after retail sales in the last two months declined 20.5% and 15.8% in February and March respectively. The April numbers should be better; however, they are still expected to show a decline of 5.8%. In years gone by the Chinese consumer, and the services sector more broadly, was a much smaller proportion of the Chinese economy. Now it makes up more than 50% of economic activity, and as such is an important bellwether of internal demand. Economic activity is still expected to improve, with industrial production set to move back into positive territory, however rising unemployment is likely to act as an additional brake on a sharp rebound.

Friday: As if Ted Baker’s problems weren’t bad enough, given the problems in Hong Kong last year, the company has issued several profit warnings over the last 12 months. It also had to write down the value of its stock by over £20m at the end of last year, and just when you thought things couldn’t get any worse, coronavirus has hit retail demand across the world. The share price is already down over 90% from its peaks as it is, and with little hope of a pickup in consumer demand in the near future, its near-term prospects look bleak. It has managed to raise £78.75m by selling Big Lobster, which owns the Group’s registered head office in London, with the £72m cash proceeds used to pay down debts, when the sale and leaseback is completed in June. The one upside is that its store footprint is narrower than some of its peers, and the business rates holiday will also help with margins, however that won’t help much if consumers stop spending. Guidance for full year pre-tax profit is expected to come in between £5m and £10m.

Friday: Despite the US economy being late in locking down its economy in March, retail sales still fell a record 8.7%, as millions of Americans were suddenly thrown out of work in the last two weeks of the month. The collapse in services sector activity has decimated the US economy over the last seven weeks, with a decade of jobs growth wiped out in a matter of weeks. This has seen unemployment spike sharply from 3.8% to 20% in fairly short order, and halted personal spending in the process. April retail sales are likely to hit a new record low of -10%, with the full effects of the virus closing down huge swathes of the US economy.