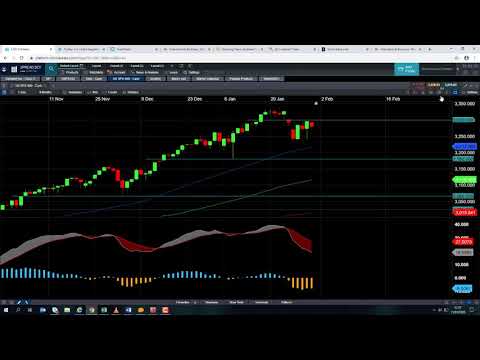 Watch our week ahead video preview, read our pick of the top stories to look out for this week (3-7 February), and view our key company earnings schedule.

In this week's video, UK market analyst David Madden discusses the sell-off in global stocks due to the coronavirus health crisis, and he talks about this week's major economic data releases and company results.

Monday: Alphabet shares have enjoyed a bullish run recently as the company has set a series of record highs so far in 2020. The stock is up over 12% since it released its third-quarter figures in late October. That update was largely positive, as revenue for the period was $40.5 billion – marginally ahead of forecasts. The group confirmed that Google’s revenue increased by 17% on a quarterly basis. Year-on-year, paid clicks on Google properties jumped by 18%, while cost-per-click fell by 2%, so it was a win-win for the tech giant. EPS came in at $10.12, but equity analysts were expecting $12.42. Advertising revenue accounts for the vast majority of its total income, but the unit that includes the cloud business, as well as the phone operation, showed a 38% jump in revenue on a yearly basis. Traders will be keen to find out if non-core areas of the business are performing well, especially in light of the increase in capital expenditure. The tech giant isn’t short of cash, but traders will want to see that funds are used efficiently.

Monday & Wednesday: In 2019, the Chinese economy grew by 6.1% – the slowest rate in 29 years, and the reading was at the lower end of Beijing’s forecast. The Chinese government issued a guidance of 6-6.5% growth at the start of 2019. It’s no secret the Chinese economy is slowing down. However, while the global manufacturing sector has underperformed,  the past five Caixin surveys of Chinese manufacturing have shown positive growth. The services report has shown a slowdown throughout 2019, but is still showing modest expansion. Historically, traders put more weight on the Caixin survey than the official figures from Beijing, as they feel they are more impartial. The Chinese government have introduced a number of policies in recent months to help the economy, such as loosening the lending criteria for banks. In light of the robust levels of retail sales, industrial production and fixed-asset investment, it’s fair to say the economy has turned a corner.

Monday & Wednesday: A mixture of general and Brexit uncertainty hit the British economy at the end of last year. As we know, the pro-business Conservative party won a sizeable majority, but businesses and consumers watched the election anxiously. The fear of a Corbyn-led government caused the business community to sit on their hands as there was the possibility of capital flight in the event of a Labour victory. The British manufacturing industry has been in contraction for 8 months, but that can’t all be blamed on Brexit because the US and German industries are suffering too, and the US-China trade war can be felt in Europe. Luckily for the UK, the services sector accounts for approximately 75% of economic output, so the lagging manufacturing industry isn’t a huge setback. In the past few months, the British services industry has been flickering between positive and negative growth, and it’s clear some uncertainty persists. The December retail sales report made for uncomfortable reading as it saw a sharp decline of 0.6%, highlighting consumers’ unwillingness to spend. The Bank of England kept rates on hold last week, and only two policymakers voted in favour of a rate cut, while there was talk of three central bankers voting for a cut. Now traders are talking about a potential rate cut from the BoE in the second half of the year. The final reading of manufacturing and services reports from major eurozone economies like Germany, France, Italy and Spain will be in focus this week too. The manufacturing industry in the currency bloc is in contraction, but the very important German sector appears to have bottomed out. The services sector is expanding at a modest rate, and in addition to that, the growth rate appears to be gaining pace. The updates will give us a flavour of what’s going on in the region, but the reports are unlikely to influence the European Central Bank’s next rate decision. The US services sector plus the manufacturing industry are growing at passable levels. The growth rates aren’t amazing, but they’re well off the lows that were registered in the third quarter of 2019.

Tuesday: The Australian central bank cut interest rates three times in 2019 in reaction to its slowing economy. The Australian economy is very much intertwined with China and India, and the Chinese economy grew at its slowest pace in 29 years in 2019. The Indian economy slowed too, and as a reaction to that, India’s central bank also cut rates. The Fed trimmed rates three times in the second half of 2019, which is likely to have influenced the actions of other central banks around the globe. In early 2019, the unemployment rate in Australia dipped below 5% briefly, but it rebounded and spent much of the second half of 2019 around 5.2%. It’s worth noting that between 2013 and late 2018, the jobless rate was north of 5.3%, so the current level is still deemed to be relatively low. The latest cut from the RBA was in October, and it’s likely that hasn’t trickled down to the economy just yet, so the markets are pricing in an 85% chance of keeping rates at 0.75%.

Tuesday: In the latest quarterly update the company announced a 41% fall in third-quarter underlying replacement cost profit – a common metric gauging the profitability of oil companies. The oil giant cited exceptional items, along with weaker oil prices, for the large drop in earnings. In 2018 BP spent over $10 billion on shale assets owned by BHP Billiton, but unfortunately since the massive capital outlay, the underlying energy market has declined, so their big expansion into shale sticks out like a sore thumb. No company wants to be known as the group that invested heavily in assets before a downturn in the market as it might make it vulnerable to short-sellers. In addition, the oil price has seen a surge in volatility in recent weeks. Heightened tensions between the US and Iran at the beginning of the year pushed the price to multi-month highs, but subsequently the market has plunged due to the de-escalation of tensions and coronavirus fears.

Wednesday: The company is coming from a position of strength following September’s record full-year profits. Even though there has been talk the UK housing market has come off the boil, Barratt managed to increase margins, revenues and earnings. In a telling sign of the changes in the industry, the company revealed that house sales in London were broadly flat, while other parts of England and Scotland saw sales increase. A combination of lower interest rates and the help-to-buy scheme assisted the likes of Barratt. The company did caution that sales growth could cool, so the annual update wasn’t exclusively bullish. In October the firm said the number of completions in the 14-week period until mid-October jumped by 14% on the year and the order book was healthy. The pro-business Conservative party won a large majority in the general election in December and industry peers such as Crest Nicholson and McCarthy & Stone have revealed that client interest has ticked up in 2020, so Barratt could be in for something similar.

Thursday: The social media group’s share price tumbled on the back of the third-quarter update in October. It was a poor set of figures by all accounts with EPS of 17 cents, which missed the 20 cents forecast. The revenue fell shy of forecasts too at $823.8 million, while the consensus estimate was $874 million. Weaker-than-expected advertising, plus product issues, were blamed for the underperformance in relation to revenue. The group confirmed that some of the issues that weighed on the third-quarter numbers are likely to hang over the group in the fourth quarter, so expectations have been managed to the downside. CFO Ned Segal cautioned that some of the problems could bleed over into 2020 too, so traders will be keen to get an update on that front. In the third quarter, the number of monetisable daily active users ticked up by 4% on a quarterly basis to 145 million, and that metric will be in focus on Thursday.

Thursday: The company listed on the stock market in May with an eye-watering valuation of approximately $82 billion. It enjoyed a honeymoon period for a couple of months, but then the wheels came off. In August, the group revealed a loss per share of $4.72, which was greater than expected. The revenue metric missed on forecasts too. The second-quarter update also disappointed traders as the loss for the three-month period widened to $1.16 billion, and costs surged by 33%. On the bright side, revenue increased by almost 30% to $3.81 billion, exceeding the $3.69 billion estimate. The company’s reputation took a knock in late November when it was announced it had lost its licence to operate in London. The firm lost its licence to do business in the UK capital in 2017, but it was granted two extensions. Uber is appealing to regain its London licence. Traders will be wondering what steps the company is taking to reduce its loss.

Friday: The December jobs report was a muted affair, and not just because the November reading was very impressive. In the final month of 2019 the US added 145,000 jobs, which is a respectable reading, but keep in mind that economists were expecting 166,000. The stellar reading of 266,000 in November was revised lower to 256,000 – which was still a great number. The unemployment rate held steady at the 50-year low of 3.5%, meeting forecasts. Average earnings on a yearly basis came in at 2.9%, but traders were expecting it to stay at 3.1%. Overall it was a mediocre report. The Fed cut interest rates three times in the second half of 2019, and the latest jobs report had elements for the doves as well as the hawks. The Fed seem to be content to sit on their hands and allow the various rate cuts to trickle down to the economy, and the latest jobs data is unlikely to jolt the US central bank out of their current groove.

Friday: The labour market in Canada rebounded in December as the unemployment rate fell to 5.6% from 5.9%. In addition to that, the employment change reading showed 35,200 jobs were added, while the consensus estimate was for a decline of 25,000. It’s worth noting that over 71,000 jobs were lost in the previous reading. On the downside, wages growth fell from 4.36% to 3.84%, but keep in mind the CPI rate is 2.2%. The Bank of Canada have kept interest rates on hold for over a year, and from time to time there were whispers they could potentially start to alter their language. At the latest BoC update, the head of the bank, Stephen Poloz, suggested a rate cut was a possibility should the economy slow down.