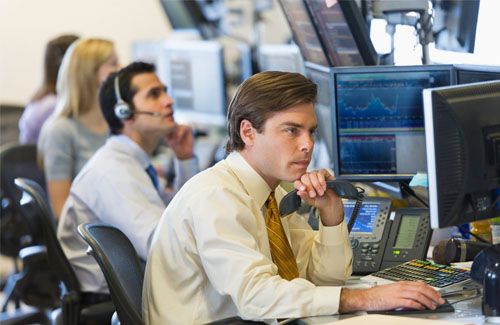 Stock markets are broadly unchanged after a day which saw indices swing between negative and positive territories.

The losses earlier in the session were replaced by gains, but they have been eroded as we near the end of the day.

Mining companies on the London market are in the red after China revealed manufacturing figures which showed the sector barley grew in February. The manufacturing PMI report for China came in at 50.3, down from 51.3 in January, with economists expecting a reading of 51.2. The fact the sector hardly expanded spooked investors, and that has prompted them to dump Glencore, BHP Billiton and Rio Tinto.

ITV are in the red today after the company revealed a 5% fall in net advertising revenue (NAV). This has been an area that ITV have been battling for a few years, as fewer people are watching live TV. The Online, Pay & Interactive division posted a 7% rise in revenue, which shows the company is adapting to the viewing habits of its customers. CEO Carolyn McCall  described the environment as ‘challenging’ and is focused on a ‘strategic refresh’ for the company. Investors would prefer to see a structural change sooner rather than later as the share price has been falling since July 2015.

Taylor Wimpeyrevealed a 5.8% fall in profits, but when you strip out exceptional items it was a 10.7% rise. The homebuilder had a strong start to the year and it expects to raise the dividend by 10% next year. The company stated it is aware of the political uncertainty doing the rounds as a consequence of Brexit, but it hasn’t impacted its business. The share price managed to just about print a new 10-year high in January, but since then has drifted lower. If it can hold above 170p its outlook could be positive.

American stocks are bouncing back after the negative finish last night. Dealers are content to take advantage of relatively cheap prices. In the wake of US Federal Reserve chief Jerome Powell’s update yesterday, traders are bracing themselves for the possibility of four interest-rate hikes this year.

US growth for the fourth-quarter was revised down to 2.5% from 2.6%. US pending home sales fell by 4.7% in January, with economists anticipating a reading of 0.3%. The December report was 0.5%.This echoed the 7.8% fall in new homes sales that was reported on Monday. The Chicago PMI report fell back to 61.9 from 65.7 in January, against the consensus for 64.2. A reading north of 60.0 is still strong though.

It is fair to say that US economic indicators haven’t been too hot recently, and should the underwhelming run continue, it may prevent the Federal Reserve from tightening interest rates at a quicker pace.

EUR/USD is lower on the day after the eurozone inflation rate slipped from 1 3% to 1.2% – meeting expectations. Traders had a muted reaction to the report, as German and French CPI inflation levels have fallen in the past two trading sessions. A slide in the cost of living in the eurozone paints a picture of falling demand, which doesn’t bode well for the region.

GBP/USD has been hit by the Brexit uncertainty, and to a lesser extent a firmer US dollar. Michel Barnier, the European chief negotiator, warned that the clock is ticking in relation to securing a deal, and the issue of the Irish border has yet to be solved. Dealers don’t like uncertainty, and Brexit provides plenty of this – as a result  sterling is feeling the pinch.

Gold is largely unchanged on the day and is being held back by the relatively strong US dollar. Yesterday gold dropped to its lowest level in over two weeks, and even though we have seen a small bounce back today, the short-term trend remains bearish. A break below $1307 could signal further loses for the commodity.

US oil production went to on to hit yet another record high and this is adding to the bearish sentiment.