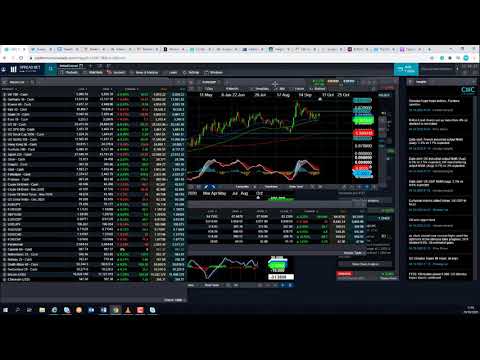 Watch our week ahead video preview, read our pick of the top stories to look out for this week (12-16 October), and view our key company earnings schedule.

This week, David talks about the positive sentiment in stocks due to hopes for a US stimulus package, and he discusses the big events of the week ahead; the UK-EU trade talks, US banks, Asos results and UK jobs data.

Tuesday: JPMorgan Chase, Citigroup; Wednesday: Bank of America, Goldman Sachs, Wells Fargo; Thursday: Morgan Stanley:
The banking sector is particularly exposed to the coronavirus pandemic. Banks' trading divisions have generally performed very well owing to the surge in market volatility, but at the same time, the provisions for bad debts rocketed. Lending has been hit too, as margins are squeezed in the ultra-low interest rate environment. In the wake of the first-quarter reporting season, it was announced that the major US banks set aside $25bn for bad debt provisions. In Q2, the six banks mentioned collectively put aside almost $34bn in relation to credit losses. Different finance houses have different specialisms, and as a result differing fortunes. Those that are more focused on trading the financial markets performed well: JPMorgan’s trading unit registered record revenue, and Goldman Sachs posted fixed income and equity trading revenue at the highest levels in several years. On the other hand, Wells Fargo, who are one of the biggest mortgage providers in the US, swung to a quarterly loss (when bad debt provision is factored in). It was the bank’s first quarterly loss in over a decade.

Tuesday: China is the second largest economy in the world, yet it has been cooling for a number of years, even before the Covid-19 pandemic appeared on the radar. When the virus did hit in January, China was plunged into a tough lockdown. The country’s recovery has been relatively good, but far from strong. In 2020, only June saw a positive growth in imports – by 2.2% – indicating that internal demand in China is not impressive. The nation is the largest importer of minerals in the world so the perception of China’s health is often influential on commodity prices. Exports have been strong, which could be construed as robust external demand, but China is a major manufacturer of personal protective equipment (PPE), so it is highly likely that the export figures are skewed due to demand for PPE. The imports metric is probably the more important at the moment as it should give a clear indication of internal demand. The Caixin survey of Chinese manufacturing and services showed that activity has cooled a little but they are still at decent levels.

Tuesday: The Johnson & Johnson share price has had something of a V-shaped recovery during the global pandemic. The stock hit a record high in early February, then was caught up in the major sell-off in March, but by late April, it had set a new record high. By-and-large, it has been range-bound in recent months. It is strange that a fresh record high wasn’t achieved last month when the S&P 500 hit all-time highs, but then again, the tech sector played a big role in that move. Second-quarter earnings dropped by 34.6% to $3.63bn, and EPS was $1.67, which topped the $1.49 forecast. Revenue slipped by 10% to $18.3bn, but it exceeded equity analysts’ forecasts. The pandemic hurt the business because certain medical procedures were postponed, but did lead to a rise in demand for over-the-counter drugs. The full-year earnings and revenue guidance was lifted. Johnson & Johnson’s potential vaccine for Covid-19 has been accepted into the scheme that is being backed by the US government.

Tuesday: The tech giant held an event last month where it revealed a new iPad and Apple watches, and there has been speculation that the iPhone 12 will be announced at this event. It is understood that the pandemic caused a delay in production, and that is why it wasn’t revealed in September. There is chatter the new smartphone could come in four different sizes, and that it will be 5G-enabled. In addition to a possible iPhone launch, there are rumours Apple will also announce a new over-the-ear headphones and a smaller homepod.

Tuesday: The airline pushed back the release date of its quarterly update, which is not uncommon, especially in this climate. In January, Delta’s share price came within 1.5% of its record high, so the group was clearly in a strong position ahead of the pandemic. The absence of any Boeing 737 MAXs in its fleet was a major benefit to the group. The industry as a whole has been hammered by the pandemic, and Delta received a slice of the $25bn bailout that the sector received from the US government, with President Trump calling for further relief measures. Delta benefited greatly from business travellers, but the rise of Zoom calls had impacted that revenue stream, and even when things go back to normal, some companies will probably cut back on pricey business-class fights.

Last month the company revealed plans to raise $6.5bn in a bid to beef up its balance sheet. The airline had to revise down its capacity plans for the fourth quarter, as business has been relatively slow to pick up. In July, Delta said that Q3 revenue will be no more than a quarter of last year’s figure, so that would equate to an internal guidance of up to $3.13bn. According to a survey carried out by Reuters, equity analysts are expecting the third-quarter loss per share to be $3.04, following up on the second-quarter loss per share of $4.43.

Tuesday: The September claimant count will be in focus as it is the most up-to-date labour report. The August reading was 73,700, which undershot the 99,500 forecast, while the previous reading was revised down to 69,900 from 94,400. The UK unemployment rate increased to 4.1% from 3.9%, so we are slowly seeing the impact of the health crisis on the labour market. The unemployment figures still don’t reveal a whole lot, as those who are still on the furlough scheme are not counted. Chancellor, Rishi Sunak, has mapped out the plans for when the furlough scheme ends. Basically, companies will have to pay their staff 55% of the normal wages for 33% of the workload, and the government will top up the wages by 22% - bringing the employee’s earnings to 77% of their full salary. Given that the scheme isn’t overly attractive from an employer’s point of view, the unemployment rate is likely to jump when the furlough scheme ends in late October. Average earnings were -1%, a fall which can be seen as positive, as it may mean that more people in lower income jobs are returning to work. The retail sales report for August showed a 0.8% rise, the fourth consecutive month of growth. July’s reading was revised up from 3.6% to 3.7%. The growth rate has been tapering off sharply, and traders will be wondering if the trend will continue.

Tuesday: US CPI; Friday: US retail sales: In August, the CPI rate increased to 1.3% from 1%, topping the 1.2% forecast. This was the highest level since March, so it’s clear that demand is picking up. Like UK retail sales, US retail sales took a beating in the wake of the lockdown, but have been bouncing back in recent months. In fact sales have expanded for four consecutive months, however the rate of expansion has dropped off greatly. May saw sharp recovery as sales surged by 17.7%, while August saw sales increase by 0.6%. Last month was the first full month that the weekly $600 government support wasn’t paid out, so it will be interesting to see what sales were like in September. The latest jobs numbers from the US showed that the unemployment rate dropped to 7.9%, from 8.4%. It is worth noting that the participation rate slipped too, so it is possible the jobless rate isn’t as good as it looks. The latest manufacturing PMI and ISM manufacturing data cooled a little from August but the levels of activity are still respectable.

Wednesday: The Asos share price sold off aggressively in February over the pandemic, but bottomed out around the 1,000p region. Asos shares began to rebound in April when things settled, hitting a five-month high – recouping all the pandemic-related losses – on the back of a bullish trading update. The online fashion retailer expects full-year profit-before-tax to be at the top end of market expectations, despite the extra costs brought by the pandemic. Retailers that continued to operate during the health crisis incurred additional costs in relation to health and safety and in some cases delivery too. For most firms, the strong sales performance was counteracted by the jump in expenses, so it was impressive that Asos revealed a bullish forecast. The group saw a strong recovery in the EU on the back of economies being reopened. In the four-month period until the end of June, sales jumped by 10% to £1.014bn, but the company is still cautious about its outlook in the medium term. The stock was given another boost in August when the company announced that its full-year profit will be significantly ahead of market expectations.,

Thursday: Walgreens Boots Alliance has been underperforming for a number of years, and was already undergoing a restructuring programme before the pandemic struck. Since December 2018 the stock price has dropped roughly 55%. Last month, the share price hit its lowest level since 2012. The third-quarter results posted in July hurt investor confidence: EPS was 83 cents, which was a big miss on the $1.17 analysts were expecting. Revenue was $34.63bn, essentially in line with forecasts. The company blamed higher supply-chain costs and an increase in staffing and cleaning costs for the decline in earnings. To make matters worse, customers shifted towards lower-margin items, so that impacted the bottom line too. The lockdown had a terrible impact on the UK operations, as footfall at its Boots stores tumbled by 85% in April. The group intends to close Boots outlets and opticians as a way of cutting costs. Walgreens lifted its cost savings target for 2022 by $2bn. In the last quarterly update, the firm cautioned about pandemic-related costs, so it might not be out of the woods yet.

Thursday: The negotiations between the UK and the EU are still rumbling on. Both sides have said that progress has been made, but differences still exist, especially in the area of fishing. The UK prime minister, Boris Johnson, previously said that if a meaningful deal hasn’t been mapped out by 15 October, the British negotiating team will walk away from the talks. This could just be a ploy by Mr Johnson as a way of putting pressure on the EU. It is in the economic interest of both parties to strike a trade deal. If a compromise is not struck, it could mean that the UK and EU will conduct trade on WTO terms come January.

Thursday: The jobs market has been hammered because of the pandemic, but things are slowing improving. The latest initial jobless claims reading fell from 849,000 to 840,000, which was the lowest reading since the pandemic took hold. For the past six weeks in a row, the metric has been below 1m. The continuing claims report measures the number of people who are still receiving unemployment benefit, and it dropped to 10.97m – the lowest mark since early April. In economic downturns, companies are relatively quick to cut jobs, but the rate at which jobs are created tends to be much slower.