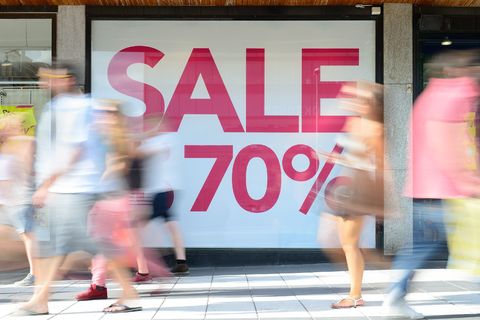 A lot of today’s pain is being felt by UK retailers after the downgrades this week by US retail giants Target and Walmart, while today US department store Kohl’s followed suit by warning of the effects of higher costs on their margins, and their profits.

This has seen the likes of Tesco come under the most pressure, along with Kingfisher, with losses for the likes of Next, Marks & Spencer and JD Sports. We’re also seeing some weakness in the likes of Unilever and Reckitt Benckiser over concerns about their own margins as consumers cut back on everything but the essentials. As if to reinforce these concerns about margins pinch, the latest CBI trends survey showed that three in four UK manufacturers were planning on increasing prices to try and cover soaring input costs.

The decision by British Airways owner IAG to announce it has secured a deal with Boeing for 50 737 MAX aircraft tells us more about the challenges facing both companies than anything else. IAG gets a discount for replacing its older less fuel-efficient aircraft and Boeing gets to offload its 737-MAX planes which it is struggling to offload in the wake of the two crashes which trashed its reputation.

EasyJet shares have slipped back from one-week highs after the airline declined to offer guidance over concerns about the financial outlook Costs have been a key stress point for airlines, with the rising cost of jet fuel which has been 77% hedged for 2023, however there is also the uncertainty that the rising cost of living will deter passenger numbers on account of lower disposable revenue.

Royal Mail shares have fallen to the bottom of the FTSE 100 after missing expectations on full-year revenues and warning that adjusted operating profit consensus for its Royal Mail division is for £303m with downside risk, due to higher fuel costs and wage demands. To mitigate this the company warned it would have to raise prices on parcels and stamps in the coming months.

Homeserve shares have jumped to the top of the FTSE 250, after Brookfield Asset Management offered to pay £4bn for the company which runs the Checkatrade website.

US markets opened sharply lower following on from today’s weakness in both Asia and European markets, although we are for now managing to hold above the 18-month lows that we rebounded from last week.

US weekly jobless claims rose to their highest levels since early March, at 218k last week, while the latest Philadelphia Fed Business index fell sharply from 17.6 to 2.6, reflecting a similarly sharp drop that we saw in this week’s Empire manufacturing survey.

Cisco Systems shares have fallen back sharply after the company slashed its Q4 revenue outlook to -1% to -5.5%, against an expectation of +5.7% as well as cutting its full year forecasts. The company cited the effect of Chinese lockdowns and other supply chain disruption for the shock downgrade. The declines in Cisco have translated into similar weakness in the likes of Broadcom and Ciena Holdings.

US retailer Kohl’s has followed in the footsteps of Target and Walmart in downgrading their expectations for profits on the back of rising costs.

The US dollar has slipped back across the board today, with the Swiss Franc being one of the primary gainers, which seems somewhat counterintuitive on a day which is seeing quite a bit of value destruction on equity markets.

The US dollar decline appears to be being driven by lower yields as concerns grow about the resilience of the US economy over the course of the rest of the year, as multiple US companies warn on margin compression and higher costs.

The big sell-off in equity markets is translating into a sharp fall in oil prices, back below $110 a barrel as rising inflation and slowing growth fuels concerns over demand destruction. Despite several attempts to move higher this week oil prices have declined for the last two days and could well finish lower for the third day in succession.

The slide in yields and general negative tone for the US dollar as well as stock markets is helping to pull gold prices higher, having hit three-month lows earlier this week.

Earnings news continues to provide the key direction at a stock specific level with the US retail sector very much in focus. Wal Mart had already been rocked by numbers released at the start of the week with the underlying selling off by around 10% but evidently not wanting to be outdone, Target’s 25% slide yesterday escalated matters. With US consumers already feeling the pinch from rising living costs, industry margins are set to be hit at a time when inputs keep getting more expensive. Daily vol on Target jumped to 594% against a monthly print of 185%, whilst Wal Mart sat at a rather more modest 200% against 72%.

Those recession fears played out across many sectors of the market, with clear bearing being seen on companies reliant on discretionary consumer spending. As a result, price action jumped in our JK OutdoorLiving share basket, including the likes of Lululemon, down 10% and Dick’s Sporting Goods down 14% on the day. The basket itself lost close on 10% and daily vol jumped to 127% against 80% on the month.

The prospect of an economic slowdown also hit the volatile lumber market, with this being the next nail in the idea that home improvements – and even new build projects – will slow further. The underlying price here moved below $800 for the first time since November, that’s down $600 in just over two months. Daily vol moved to 244% against 169% on the month.

Rounding off with currencies, crypto markets continue to see order return after last week’s shake out with daily vol prints typically coming in back below the 100%, whilst in fiat markets, again it’s the Turkish Lira which remains the most active. Fundamentals continue to outweigh technicals here ahead of next week’s central bank meeting. Daily vol on USD/TRY sat at 19.39% against 11.25% on the month.