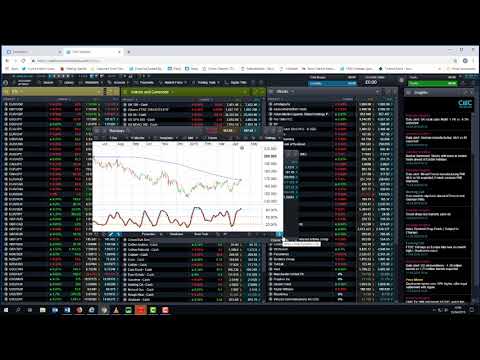 Watch our week ahead video preview (above), read our top 10 stories to look out for this week (22-26 April), and view our key company earnings schedule.

Chief Market Analyst Michael Hewson looks ahead to a big week of bank earnings, including Deutsche Bank, Barclays and RBS, as well as central bank decisions from the Bank of Japan and the Bank of Canada. He also looks at results from Boeing, Tesla and Amazon.

Bank of Canada rate decision
Wednesday: The Canadian economy appears to have stalled in the last few months, prompting the Bank of Canada to adopt a much more dovish tone at its most recent rate meeting. Policymakers also removed a reference that interest rates might need to rise further over time, while Governor Poloz suggested in recent comments that rates warrant a level below neutral, so we’re unlikely to see a change at this month’s meeting. The inflation outlook, currently at 1.5%, has shown no signs of picking up, while consumer spending has remained muted, with retail sales declining three months in a row.

Boohoo Group full-year results
Wednesday: It’s been a turbulent few months for online retailer Boohoo.com, but its outlook has improved over the last year. Profit rose more than 40% to £43.3m last year, while revenue also improved as sales increased across its brands, with Pretty Little Thing leading the way. In January, the company said it expected revenue growth of 43-45%, up from its previous estimate of 38-43%, while also narrowing its margin estimate to 9.25-9.75%. This year, the shares have risen steadily as the company looks to expand its US presence. Former Primark COO John Lyttle joined as CEO in March, to help with expansion.

Associated British Foods half-year results
Wednesday: It’s not been a good few months for UK retailers with stories of job losses and restructuring a weekly occurrence. The ABF share price has been a contrast to this narrative, helped by the performance of Primark. In February, the company warned of a November slowdown in sales, despite an improvement in profit. Management insist half-year profit will be ahead of expectations, following expansion in Italy and Spain, and new stores in the US. Some of this optimism may have to be tempered given that March could have seen a similar slowdown to November’s, as consumers held back ahead of the 29 March Brexit deadline.

Boeing Q1 results
Wednesday: Boeing’s Q1 update will reveal how much financial damage the 737 MAX 8 problems have had on its revenue and forecasts. The company has already slowed down production of the aircraft and may have to set aside large sums for grounded aircraft, as well as compensation for litigation over the coming months. The likelihood of the plane getting back in the air anytime soon has diminished in recent weeks, due to the enormous brand damage from recent events. Last year, Boeing’s commercial airplane business delivered a record 806 aircraft. It was thought that 2019 would be even better, with up to 900 aircraft expected to be delivered, and China being a key market. This target looks increasingly unrealistic, and given that the plane makes up to 30% of the company’s profit, the ongoing lack of confidence is likely to see that percentage significantly reduced. Investors appear to be slowly waking up to this fact, which means a downgrade to company forecasts could see the shares decline sharply.

Tesla Q1 results
Wednesday: Earlier this month, Tesla admitted it would miss its Q1 delivery target for cars, even though it produced 77,100 cars during the period. Wednesday’s update should confirm by how much the company missed its target. Despite the fall in deliveries, Tesla insisted that it will still meet its 2019 goal of between 360,000 and 400,000 cars, which would be a significant improvement on 2018. But it’s still a big ask to hit that target, as Tesla would have to deliver at least 100,000 cars each quarter for the next three quarters. This would be a record, and well above the previous record of over 90,000 cars in Q4 last year. CEO Elon Musk’s series of tweets that 500,000 cars is possible isn’t helping expectations. We’ll also discover how Tesla intends to work through its delivery backlog and fulfil its objective, whether this is Musk’s figure or management’s more conservative 400,000 cars.

Bank of Japan rate decision
Thursday: Like other central banks around the world, any prospect of monetary policy tightening has gone out of the window in recent months. The Bank of Japan is no different given the weak economic data, particularly manufacturing, which has weighed on its economy. No changes are expected at Thursday’s meeting.

Amazon Q1 results
Thursday: Now that Apple and Disney have decided to take on the online streaming market, Amazon Prime will have more than just Netflix to worry about. This means that Amazon’s other businesses, including retail and cloud services, will need to continue to deliver. At the end of last year, the company posted a record profit of $3bn on $72.4bn of revenue for Q4, with web services  the biggest area of growth. Despite the record profit, Amazon guided down expectations for Q1, largely because of likely higher costs in the form of wages, and moves into physical stores.

Barclays, RBS Q1 results
Thursday & Friday: It’s set to be a big week for European banks in the wake of last week’s US bank numbers, which showed that investment banking and trading revenue were falling short of expectations. If US banks are struggling then one can only imagine the problems facing their UK and European peers. This week we’ll get a good insight into how Brexit and negative European interest rates have hurt revenue at the UK’s and Germany’ s biggest banks. Continued underperformance in Barclays’ investment banking arm is likely to crystallise divisions, with major shareholder Edward Bramson keen for management to spin off this area of the business. Royal Bank of Scotland’s fortunes have improved in recent updates, as it pulls clear of its various legacy issues. However, the UK economic slowdown in Q1 may have affected loan demand across its businesses, and it’s also worth keeping an eye on any provisions for PPI and other non-performing items.

US Q1 GDP
Friday: The US economy weakened a little towards the end of last year. However, it still remains well ahead of its peers, if recent data has been any guide, despite the US government shutdown in January and February. Nonetheless, we can still expect Q1 to come in slightly below Q4. This in itself shouldn’t be a worry, given that the first quarter tends to be a slow starter for the US economy in any case due to seasonal effects.

Deutsche Bank Q1 results
Friday: Deutsche Bank has spent the last few weeks consistently in the headlines for all the wrong reasons. Its US business remains in the eye of the storm, along with speculation about a possible shotgun marriage with Commerzbank, an outcome that would be highly contentious, as well as unlikely. Given the weakness seen in US banks’ trading revenue, it’s questionable that Deutsche could fare any better, which means management may have further job cuts forced on them as the operating environment deteriorates further. With ECB officials already questioning the logic of any Commerzbank tie-up, it seems that confidence in senior management will decline even further if we see another poor set of numbers. There might also be further speculation about interest from Unicredit, which was doing the rounds a few weeks ago.