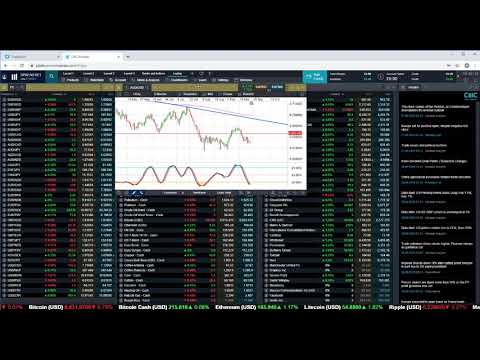 Watch our week ahead video preview, read our pick of the top stories to look out for this week (30 September-4 October), and view our key company earnings schedule.

Chief market analyst, Michael Hewson, looks ahead to the latest PMI data for next week, the RBA rate meeting, Tesco's results, and the US non-farm payrolls report. He also looks at the key levels on EUR/USD, GBP/USD, the FTSE 100 and German DAX.

UK PMIs and final GDP
Monday, Tuesday, Thursday: The slowdown in economic activity across Europe and the rest of the world is a worrying development for UK business, Brexit concerns notwithstanding. This week’s final Q2 GDP numbers should confirm the contraction seen in the second part of H1. However, it is this week’s purchasing managers' indices (PMIs) from September that should determine how strong any rebound in Q3 is likely to be. Manufacturing and services did show an improvement in August, but the big question is whether this can translate into the end of the quarter.

Global manufacturing PMIs (September)
Tuesday: For most of 2019 there has been significant divergence in PMI numbers, with manufacturing underperforming, while the services sector has managed to hold up reasonably well. There had been some evidence of a pickup in August, particularly on the manufacturing front, albeit from very weak levels. This improvement looks like it may have been a flash in the pan though, after last week’s German manufacturing flash numbers hit their worst levels in over 10 years, at 41.1. French manufacturing also softened in September, increasing concerns that whatever the European Central Bank does, it's unlikely to help a European economy that continues to suffer from multiple problems, including US-China trade tensions and the ongoing uncertainty surrounding Brexit.

Reserve Bank of Australia rate meeting
Tuesday: The RBA started this year’s central bank rate-cutting cycle back in May, when it cut rates from 1.5% to 1.25%. Since then, it has cut rates again, brining the cash rate down to 1%. The odds are we could see another cut to a new record low of 0.75% this week. Unemployment ticked higher in the latest labour market report, and the slowdown in China appears to be affecting the wider economy. While RBA governor Philip Lowe expressed pessimism that further rate cuts would be effective, concerns about a slowdown are unlikely to stop the RBA from acting further, either this week or in November.

Tesco half-year results
Wednesday: Tesco has had a fairly decent year so far, though its share price has pretty much gone sideways since May, as the supermarket sector continues to be squeezed from the bottom up by Aldi and Lidl. The company has sought to bolster its balance sheet by spinning off its mortgage business to Lloyds Banking Group for £3.8bn, and this has helped it outperform rivals Sainsbury’s, Morrisons and Asda. Tesco said it would use the proceeds to reinvest in its remaining businesses and remain competitive in terms of its costs. In a recent Kantar survey, the company also saw some bright spots from sales of 'free-from' products, which saw an 11% rise, and its own value lines, which helped restrict the decline in overall sales to a modest 1.4%. Volume sales in the most recent Kantar survey showed a rise of 0.9% from a year ago.

Ford Motor Q3 results
Wednesday: Ford's share price has had a couple of attempts to get above $10.50 this year, failing on both occasions as concerns over trade hit its profits. In July, the company announced a $1.2bn charge in respect to global restructuring costs, as it looks to close plants in Europe. It's also deepening ties with VW into what will be a driverless car technology start up, called Argo AI. Trade concerns have hit Ford quite hard, not only in Europe and China, but in Mexico as well, with President Trump calling on the company to reshore its manufacturing activity. Sales have been struggling in recent quarters due to a variety of factors, such as a host of product recalls, including on its popular Explorer model, in its core US markets.

Global services PMIs (September)
Thursday: For all the problems in manufacturing, the services sector has largely been a beacon of stability, holding up at fairly robust levels of activity. The overriding concern about this divergence has been that at some point, the weakness in manufacturing could start to drag on economic activity elsewhere. Last week’s flash PMI numbers would appear to suggest these fears are being realised, with much weaker-than-expected readings from both Germany and France. If these weaker numbers are confirmed, then the euro could come under further pressure in the coming days.

Ted Baker half-year results
Thursday: Ted Baker’s share price has not had a good year so far – it's down over 30% year to date, and over 60% lower since the end of 2017. There are several reasons for this decline, from the departure of founder Ray Kelvin over allegations of improper behaviour, to concerns about the impact global economic slowdowns in China, the US and Japan are having on the company’s sales targets and margins. The collapse of House of Fraser didn’t help either, but there comes a time when investors start to ask how much bad news is already priced in. In June the company warned on profits again, sending the shares to six-year lows. However, the company has signed some positive deals in the last few months, which in the long term ought to be revenue accretive. In April, Ted Baker announced a joint venture with Shanghai LongShang Trading Company, which is expected to expand the brand into China, Hong Kong and Macau, and what is likely to be one of its biggest markets for years to come. In August, the company announced a five-year partnership with Sojitz Infinity, which is expected to offer similar positive benefits.

PepsiCo Q3 results
Thursday: A year ago PepsiCo was in the process of future proofing its business, moving away from sugary drinks and into baked fruit and vegetables. The purchase of Baked Foods, as well as the $3.2bn acquisition of Sodastream, were an attempt to fend off Coca-Cola as it tries to become more environmentally conscious. With governments cracking down on sugar and waste, the idea of producing concentrates and carbonation packs is a natural progression. In the summer the company reported that these efforts seemed to be paying off, with the company seeing revenues rise 4.5% in Q2 to $16.5bn, led by its Frito-Lay North America division which sells Doritos and Cheetos. Expectations for Q3 are for EPS to come in at $1.50c a share.

US non-farm payrolls
Friday: Witht the Federal Reserve having cut US interest rates as expected in September, the US labour market has continued to hold up fairly well. Last month the headline number was a little bit weaker than expected, however wages growth has continued to expand at a rate in excess of 3%. Weekly jobless claims are still near multi-year lows, and while consumer confidence appears to have slowed, there is no evidence that the US economy is showing sharp signs of slowing. Expectations are for payrolls to come in at 140,000, a 10,000 improvement on August, while wages are expected to remain steady at 3.2%.