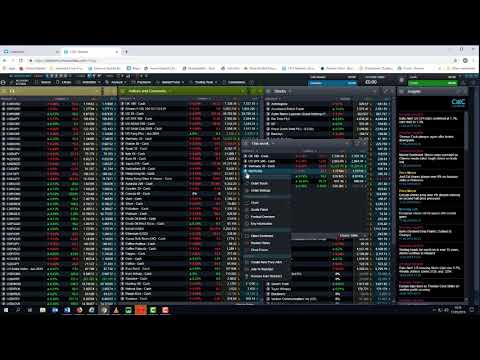 Watch our week ahead video preview (above), read our top 11 stories to look out for this week (20-24 May), and view our key company earnings schedule.

Chief Market Analyst Michael Hewson looks ahead to next week’s European elections, UK CPI inflation and the US Federal Reserve minutes, as well as key levels on FTSE 100, DAX, S&P 500 and the decline in the pound against a difficult Brexit backdrop. Michael also assesses Royal Mail and Metro Bank.

Home Depot Q1 results
Tuesday: For a company that posted record sales in 2018 (a rise of 7.2% to $108.2bn) the share price performance over the last 12 months has been disappointing. The company appears to have benefited from a struggling US housing market, with consumers spending money on improving their existing home, rather than moving to a new one. Its forward guidance was also positive; expectations for fiscal year 2020 were for total sales of $115bn to $120bn; however, it would appear that investors were hoping for more. As a bellwether of the US economy and consumer, Home Depot’s performance in this latest update could offer clues about the future of the economy. Profits are expected to come in at $2.18c a share, up from $2.09c at the end of Q4.

Metro Bank AGM
Tuesday: Metro Bank shares are down over 80% in the last 12 months after an accounting mistake showed that the bank was undercapitalised in terms of risk weighting and in order to improve that weighting it would have to either raise more capital, or sell off some of its loans. Though the bank was able to raise £375m, this week’s AGM could see investors call for the removal of either chairman Vernon Hill or CEO Craig Donaldson, as a consequence for what can only be described as significant mismanagement of the business.

UK CPI (April)
Wednesday: UK inflation has started to tick a little higher in recent months, as higher energy prices and council tax bills feed into the headline numbers. The headline consumer price index (CPI) hit a two-year low in January, coming in at 1.8%, however a weaker pound could limit the downside in the near term. This week’s April inflation numbers could see price pressures head back towards 2%. But with wages still rising at 3.4%, the impact is likely to be minimal, as the ability of retailers to pass on price increases remains limited.

Royal Mail full-year results
Wednesday: Royal Mail's share price has been in freefall since record peaks above 600p in 2018, falling below its IPO price of 330p at the end of last year. So far this year it’s been trading at record lows. The IPO was widely criticised, and none of this would have been a surprise if investors had looked at the company’s forward projections for earnings. Recent profit warnings appear to have been the final straw, causing a lot of investors to cash out. Its achilles heel has always been the letters division, where volumes have continued to decline, as well as its lack of flexibility in being able to cut costs. The company is still profitable, and revenue has continued to rise, but it hasn’t been able to cut costs as quickly as it would have liked, and profits are being squeezed. Full-year operating profit is expected at between £500m and £530m for the year ending 31 March, a big decline from last year's £694m.

Marks & Spencer full-year results
Wednesday: Marks & Spencer's share price hasn’t done that much in the last 12 months, being only slightly lower than this time last year. Some benefits from CEO Steve Rowe’s restructuring plan started to show in the first-half numbers at the end of last year. First-half pre-tax profit rose to £127m, despite revenue declining 3%, falling slightly below the £5bn mark on the back of a difficult retail environment. Its general merchandise division has continued to underperform, but no more than many of its peers. The food division, which has long set itself apart from the rest of the business in terms of outperformance, appears to be feeling the impact of the supermarket price wars, with a slight dip in revenue. Profit is still expected to come in better than expected, however store closure costs could weigh on the figures.

US Federal Reserve minutes
Wednesday: This week’s Fed minutes are likely to add further colour to the debate about future FOMC policies. Much has been made of the use of the word ‘transitory’ from Fed chairman Jay Powell in recent discussions. The lack of inflationary pressure has raised expectations that we might see the Fed lean into talks of possible rate cuts. With wage growth at 3.4% and the jobs sector still robust, markets appear to be getting ahead of themselves. The latest minutes are expected to reinforce the view that the Fed is in no rush to move on policy in either direction.

Germany GDP, Germany and France flash PMIs (May)
Thursday: Recent manufacturing PMI numbers have shown little sign of a significant pickup in economic activity. Concerns over Brexit and trade war fallouts have hammered German output in particular, and while there was a modest pickup in April, it was pretty feeble. Services activity has been better and here there might be a silver lining, however it's unlikely to be of much comfort in the medium term. The latest German GDP data is expected to show that the economy stagnated in Q1, narrowly avoiding a technical recession.

Best Buy Q1 results
Thursday: Having nearly gone out of business a few years ago, the company has enjoyed a decent turnaround in the last six years. With about 15% of the US consumer electronics markets, the company has gone from strength to strength. Its ability to take on Amazon and Wal-Mart by offering in-house expertise to its customers meant its last quarterly numbers came in ahead of expectations. The trade war with China could impact Best Buy’s numbers over the next 12 months, with any increase in tariffs likely to impact its margins, something that CFO Coryn Barry warned about in the company’s Q4 update. He could expand upon this in the latest update given the recent rise in tariffs to 25%. Expectations are for Q1 profits of $0.86c a share.

Kraft Heinz Q1 results
Thursday: When Warren Buffet bought his stake in Heinz a few years ago, he probably didn’t imagine the car crash the company has seen since then. While Unilever is probably heaving a sigh of relief that it fended off last year’s approach, it has become clear that Kraft Heinz management haven’t been paying attention to the underlying business. Forced to restate its accounts for the last three years due to procurement issues, the shares have dropped sharply in the last year to record lows. The company had also been struggling with too many products, and focused on cutting costs to the detriment of investing in products that consumers want to buy. First-quarter profits are expected to come in at $0.60c a share.

European elections
Thursday-Saturday: The latest European elections could offer up the prospect of a bloody nose to the Labour and Conservative parties, as they lose voters to the Brexit party. These EU elections are also likely to see the advance of Eurosceptic parties across the bloc, as voters tired of the political status quo and look to take back control from the more established parties, who appear to have lost the confidence of their voter bases.

Foot Locker Q1 results
Friday: Foot Locker had a strong end to its fiscal year in the last quarter, as revenue and profit crushed expectations. Same-store sales rose 9.7% in Q4 on revenue of $2.27bn and profit of $1.56c a share. The company’s investment in a variety of niche areas is also helping its sales growth, including Super Heroic, Pensole, and children’s apparel company Rockets of Awesome. Profit for Q1 is expected to continue this trend, with expectations of $1.60c as the company starts a new financial year.