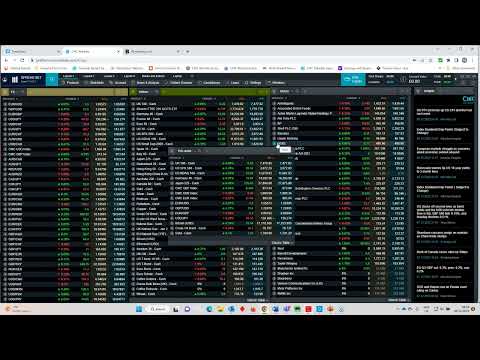 Interest rates are set to rise again this week as central bankers in the US, the UK and the eurozone meet for the final time this year. Policymakers at the US Federal Reserve and the Bank of England will be able to digest fresh inflation data, as November consumer price index (CPI) readings are released a day before their rate decisions. And as earnings announcements slow to a trickle, Adobe and Darden Restaurants serve up their latest results.

Inflation in the US eased more than expected in October, sending the US dollar and bond yields lower. Consumer prices grew by 7.7% in the year to October, below market forecasts for 8%, while core CPI – which excludes food and energy costs – rose 6.3%, versus market expectations of 6.5%.

For November, economists expect headline CPI to edge down to 7.3% and core CPI to ease to 6%.

Since the October CPI readings came out a month ago, several Federal Reserve members have stressed that CPI data alone does not determine monetary policy. However, the easing of inflation in October extended a downtrend that has developed since headline CPI peaked at 9.1% in June. With US producer prices also showing signs of having peaked, markets are braced for the Fed to slow the pace of rate rises on Wednesday.

After Fed chair Jay Powell used his speech at the Brookings Institution on 30 November to signal that the central bank plans to slow the pace of rate rises from December, it seems almost certain that the Fed will lift rates by 50 basis points (bps) on 14 December. At its last meeting in November, the Fed implemented a fourth successive rate hike of 75 bps, bringing the federal funds rate to a target range of 3.75% to 4%.

Although growth in average hourly earnings jumped back up to 5.1% in November, suggesting that wage inflation could impede inflation from falling as sustainably as the Fed would like, the central bank still seems to be in a position to cut the pace of rate hikes. The November CPI readings, due out a day before the Fed’s interest rate decision, are unlikely to steer the Fed away from 50 bps. But if inflation continued to ease last month, a 25-basis-point rate rise could become the base case in January.

Amid concerns over the effect of policy lags, and signs that economic growth is slowing, there appears to be a sense that a slowing of the pace of rate hikes is necessary. In the past few days, the narrative has shifted towards what comes next. The November inflation data and Powell’s post-meeting press conference could offer clues about the path forward. Could we be in for a series of 50-basis-point rate hikes, or might a January rate hike of 25 bps become a possibility? Watch this space.

Adobe shares – down roughly 40% this year – slid sharply in mid-September after the software company’s Q4 guidance spooked investors. Heading into Q3, the company downgraded its guidance for the quarter to $4.43bn from $4.52bn, and cut its full-year forecast to $17.65bn from $17.9bn. While the Q3 numbers were in line with the revised guidance, the company downgraded its Q4 revenue outlook to $4.52bn from $4.59bn, making some investors jittery. Some investors were perhaps also sceptical about Adobe’s acquisition of interface design application Figma for $20bn. Adobe’s Q4 profit is expected to be worth around $3.50 a share.

While unemployment edged slightly higher in September to 3.6%, it remains close to 48-year lows, pointing to a tight labour market. Total pay including bonuses grew 6% from July to September, while regular pay excluding bonuses grew 5.7% over the same period. Wage increases are therefore only just keeping pace with growth in core prices. Meanwhile, the economic inactivity rate increased to a record high of 21.6% – over 2.5 million people – driven by an increase in long-term sickness.

The main drivers of the increase in UK CPI to 11.1% in October, from 10.1% in September, was the increase in the energy price cap, which pushed household bills up by 11.7%. Grocery food price inflation rose to 16.5%, with big increases in the price of staples like milk, eggs, and cheese.

This is in stark contrast to the US and EU, where consumer price inflation has eased. That said, producer price growth in Europe is magnitudes higher than it is in the UK, so comparisons can be misleading. The UK’s annual input and output prices have been declining since June, albeit very slowly, with input prices rising by 17.2% in October – their slowest pace since February. Output prices rose by 14.8% in October, while core price growth remained at the record high of 6.5%.

We need to see some weakness in these prices, as well as evidence that wage growth is slowing. There has been little sign of that, with wages rising at 6% per annum in the three months to September. This is the elephant in the room when it comes to employment data. Vacancy rates remain at elevated levels, meaning that unemployment levels are unlikely to spike in the short term.

The recent China trade balance data reflected a Chinese economy that has seen economic activity and demand collapse in the face of surging Covid cases, as well as a popular revolt against its zero-Covid policy, after an apartment block fire cost the lives of a number of people. The sharp fall in exports of -8.7% spoke to further weakness in economic output, with the unrest at the Foxconn plant in Zhengzhou being one such example.

Imports also fell sharply, by -10.6%, a symptom of collapsing internal demand which could well be reflected in these retail sales numbers. In October, retail sales fell by -0.5%, the first negative print since May, when the country was in the throes of another strict lockdown. The November numbers are expected to show a further decline of -3.9%, while industrial production is set to rise by 3.9%, slowing from 5%.

Last month, the Bank of England raised interest rates by 75 basis points (bps), then spent the press conference undermining that decision by expressing concern about the prospect of surging mortgage costs. Behind all of that was the fact that the fallout from UK gilt market volatility may have made them slightly more cautious about being too hawkish. This seems a long time ago now. The key messaging in November was that rates were unlikely to go anywhere near as high as markets were pricing at the time, although they were still expected to rise, and that the UK economy was likely to face a two-year recession.

Given that a weak currency helps make the process of controlling inflation much more difficult, the Bank appears to have been let off the hook in recent weeks by the recent weakness in the US dollar, which has pushed the pound sharply higher. This rebound of almost 20% from the recent lows will make the British central bank’s job of keeping a lid on prices that much easier, assuming that they don’t blow it by being too dovish. Unlike in the US and EU, there are fewer signs in the UK that inflation is near to a short-term peak, even as the economy slows sharply. Nonetheless, the Bank will probably still raise rates by 50 bps, lifting the base rate to 3.5%. We can expect guidance to be on the dovish side, with the terminal rate likely to be between 3.75% and 4%.

Last month ECB president Christine Lagarde went to great lengths to suggest that, as far as the ECB was concerned, inflation probably hadn’t peaked. While they could be right, recent data suggests that they probably aren’t. In October we saw big falls in German and Italian PPI, while headline CPI in the EU fell to 10% in the recent flash CPI numbers for November, down from October’s record high of 10.6%.

A lot of ECB policymakers have expended a lot of capital in pushing the case for another 75bp rate hike this week, despite it being evident that the eurozone economy is slowing sharply in Q4. While the likes of the Bundesbank and other northern European countries are pushing the case for more aggressive hikes, it’s more likely that the ECB will slow the pace of rate hikes to 50bps, down from the 75bps that we saw at the last two meetings.

It’s unlikely that there will be a big enough consensus for anything more than 50bps amid concerns over what a more aggressive posture might prompt, particularly when it comes to the borrowing costs of countries like Italy. It’s also difficult to see how much more the ECB will be able to do in 2023 given these same concerns. What might save them is that inflation does appear to be peaking, although the weather could still have a part to play if temperatures drop and energy usage spikes.

We’ve seen a decent rebound in Darden Restaurants’ shares in the last few weeks, with the stock up over 25% from the June low, and shrugging off a disappointing set of Q1 numbers. Net sales rose 6.1% to $2.45bn, slightly below expectations, while the costs of food, drink and labour costs ate into profits. Its fine dining segment, Capital Grille, outperformed with same store sales of 7.6%, but Olive Garden sales were lower than expected, rising only 2.3%. For the full year, Darden expects earnings per share of $7.40 to $8, assuming an annual inflation rate of 6%, and revenue of $10.3bn. Profits for Q2 are expected to come in at $1.43 a share.