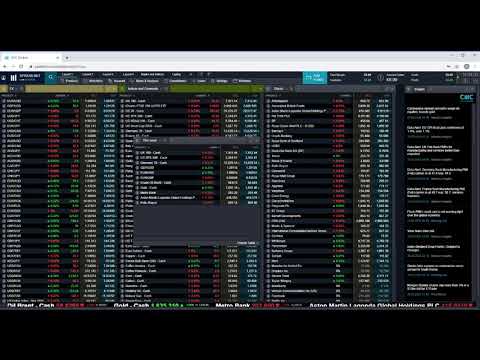 Watch our week ahead video preview, read our pick of the top stories to look out for this week (24-28 February), and view our key company earnings schedule.

In this week's video, UK chief market analyst, Michael Hewson, looks at recent moves in equity markets, and previews the outlook for gold and stocks against upcoming economic data, as well as the latest results from Metro Bank, Aston Martin and Rolls-Royce. He also looks at the key levels on GBP/USD, EUR/USD and EUR/GBP.

Monday: Is the recent recovery in Germany’s purchasing manager indices (PMIs) real, or just an illusion? Last week’s sharp drop in the ZEW sentiment index could also be a precursor to a quick fall here, though the continued rebound in PMIs suggests that for now, coronavirus concerns haven’t quite reached Europe. Recent IFO business surveys have shown there is some optimism, with the index hitting a six-month high in December. However, the January number was a slight setback. The sharp fall in recent factory output data, along with the coronavirus outbreak, could lead to further softness in Monday’s latest number.

Tuesday: Despite recent softness at the end of last year, US consumer confidence enjoyed a decent pickup in December, moving back above the 130 level for the first time since August. Current spending patterns suggest that US consumers remain fairly resilient, though recent moves higher in the headline inflation rate might start to impact spending in the coming months. At present, wages are still trending at around 3%, but with the consumer price index (CPI) now above the Federal Reserve’s target level, the narrowing gap could prompt a slowdown as we head into the spring.

Tuesday: In the previous quarter, Home Depot painted a picture of slowing sales, and downgraded its full-year profit expectations. After initially slipping back, the shares have rebounded strongly, making new record highs over optimism of rising consumer confidence and retail sales, and the dialling back of US-China trade tensions. The company posted record annual revenue of $108.2bn in 2018, and is predicted to surpass that number with an expectation of $110.9bn. This has been helped by consumers that have seen their spending power increase due to higher wages and lower interest rates. Profit is expected to come in at $2.11 a share for Q4.

Tuesday: Coca-Cola’s share price has gone from strength to strength over the last year, regularly posting record highs. While strong gains in its marque brands saw the company do well in the first six months, its attempts to diversify have paid dividends in the second half. Products like Innocent smoothies, along with plans for new canned coffee drinks after the acquisition of Costa Coffee, has prompted revenue and profit to rise in the last year, with revenue jumping 7%, well above market expectations of 5% a few months ago. The only weak spot was in Europe, the Middle East and Africa, which lagged behind as revenue slipped 2%. Expectations in 2020 are for earnings per share to rise 7%, though recent events over the coronavirus has seen Coca-Cola revise this lower for Q4, which could see some of this optimism pared back.

Wednesday: Metro Bank remains a bank to be cautious about. Last year, the company managed to raise £300m at an eye-watering yield of 9.5%, as concerns swirled around the governance of a bank where an accounting error of £900m threatened its very existence. The departures of chairman and founder Vernon Hill, as well as CEO Craig Donaldson, could be the catalyst to restore confidence in an institution that saw account holders withdraw £2bn in the first half of 2019. The share price has struggled since the Q3 results in October, and is still down over 85% from where it started in 2019. The big test for Metro Bank is not whether the worst is behind it, but whether the new management under new CEO Dan Frumkin can turn around market perceptions of competence, and restore trust during a time when the competition is fierce and UK banking margins are tight. The smart money suggests not. The damage is done, and it will be a long road back.

Wednesday: UK housebuilders have enjoyed a decent uplift since the Conservatives’ election win in December. Taylor Wimpey’s share price has risen over 30%, helped by an order book of £2.2bn and the completion of 15,719 homes last year, at an average selling price of £269,000. The company indicated in its most recent trading statement that it is planning significant revenue growth in 2020, and while build costs are anticipated to rise, profit is still expected to be close to £850m for the year.

Thursday: The US economy managed to grow slightly faster in the third quarter than in Q2, coming in at 2.1%. However, a slowdown in the manufacturing sector, along with the strike at General Motors, could have hit the economy in final quarter of the year. But with unemployment still at a 50-year-low, and wage growth trending around 3%, anything around the 2% level is likely to be well-received. It’s also unlikely to give Fed officials any sleepless nights.

Thursday: The last year has been an absolute horror show for Aston Martin’s shareholders, following its initial public offering in 2018. Management have overseen one profit warning after another in the last 12 months, with sales targets consistently missed. Although the recent cash injection from Canadian billionaire, Lawrence Stroll, has saved the business from collapse, challenges remain. The expected start in the production of the DBX SUV is hoped to help secure a steady cashflow stream in the coming years. However, the recent coronavirus outbreak in China could hit demand for what is one of its key markets. On the upside, the marque brand does have an order book for 1,800 cars, and the upcoming release of the latest James Bond film, ‘No Time to Die’, which offers the brand a decent shop window.

Friday: It’s been an incredible 12 months for the London Stock Exchange (LSE), with its share price hitting record highs, while it announced a £22bn bid for financial data group Refinitiv. This acquisition will seek to open up new income streams, and the possibility of taking on Bloomberg in the market data space. LSE shares have more than doubled since the end of 2018, and even when The Stock Exchange of Hong Kong briefly threatened to crash the party in September, the deal finally gained shareholder approval in November 2019. In the absence of any EU antitrust concerns, the deal should complete in the second half of this year, opening up the prospect of the LSE’s annual revenue trebling from £2.13bn at the end of 2018, as management look ahead to 2020 and 2021.

Friday: It hasn’t been a great year for Rolls-Royce shares, which have declined steadily as the problems around its Trent 1000 engines, which power Boeing’s 787 Dreamliner, have helped to push up costs. These problems have overshadowed the underlying business, with the company setting aside billions in an attempt to resolve the issue. In November, the company warned that costs associated with fixing these problems could increase to £2.4bn by 2023. Concerns about cashflow are also increasing, given worries about falling aircraft orders, along with the brand damage in trying to solve a problem that should have been easily fixed. Shareholders will be hoping the bulk of the company’s problems are behind it, and that management is focused on developing a new engine that addresses the upcoming challenges of reducing emissions.

Friday: There has been a bit of a pickup in eurozone CPI in recent months, with the headline inflation number inching up to 1.4% last month. Core prices on the other hand suffered a setback, slipping from 1.3% to 1.1%. This is likely to be concerning for the European Central Bank (ECB), as it undergoes a strategic review of its mandate. A recent recovery in economic activity appears to be helping drive inflation from the lows of 0.9% a few months ago, although the latest weak economic data could see this recovery stall. Such a scenario is likely to increase the pressure on the ECB to do far more in terms of monetary easing, though it’s already at its limits.