The week ahead: US GDP; WPP, HP, Rolls-Royce results 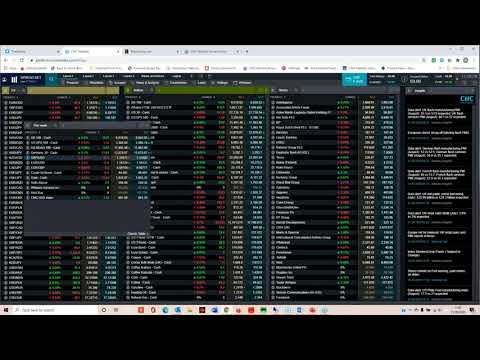 Watch our week ahead video preview and read our pick of the top stories to look out for this week (24-28 August).

Michael looks at back at last week’s surprise rise in weekly claims, FOMC minutes reaction, and looks ahead to the Jackson Hole Virtual Symposium, US and German Q2 GDP revisions, and the latest numbers from Rolls Royce and Williams Sonoma. He also looks at the key levels on GBP USD, EUR USD, US dollar index, DAX, FTSE 100, and gold.

Tuesday: After managing to ride out the worst of the coronavirus shutdowns, Best Buy’s shares are at record highs. Best Buy’s revenues slipped back in Q1 as a result of the store shutdowns, however a 154.4% rise in online sales helped offset much of the slowdown. Q1 revenues came in at $8.56bn, above expectations but still down 6% from the year before, with profits of $0.67 a share. The bulk of sales came from electrical items, from computers to kitchen products. As we look ahead to the Q2 numbers we can safely assume that costs are likely to be higher due to staff safeguarding measures, with profits expected to come in at $1.02 a share.

Tuesday: The final German Q2 GDP numbers aren’t expected to offer anything new in terms of how the country’s economy performed during its shutdown period. A contraction of -10.1% is expected to be confirmed with the main focus still on how it has recovered in the last few months. More importantly, it reflects how German businesses feel about the long term prospects of any recovery, at a time when virus rates are rising, and there are concerns about a second wave.

In July, the IFO Business Climate survey rose to post pandemic high of 90.5, after slipping to a record low of 74.2 in April. It is clear that a lot of German businesses are concerned over the prospect of a second wave, which might mean it could struggle to get back to the levels of the end of last year in the mid to high 90s.

Wednesday: Having seen Target and Walmart blitz expectations in their recent numbers, another decent bellwether of the US economy, Williams-Sonoma will announce Q2 results this week. Williams-Sonoma specialises in a range of household cookware, bakeware, and furniture. One of the biggest retailers in this space, the company also owns the Pottery Barn and West Elm brands. In January, Williams-Sonoma shares hit record highs on the back of optimism that it would continue to see consistent gains in operating margins. Since then the US economy has taken a turn for the worse, along with a sharp dip in the share price. The shares have bounced back massively since those March lows, more than doubling, and in so doing have made fresh record highs this month. In Q4 Williams-Sonoma reported double-digit gains in traffic, revenue and new customers. This progress continued in Q1 with the company seeing online sales grow by 30%, as well as posting revenues of $1.24bn and generating profits of $0.74 a share. Despite this better than expected performance, management suspended guidance, though they did keep the dividend. Expectations are for profits of $0.88 a share.

Thursday: The rise of working from home in the wake of the coronavirus pandemic has precipitated a big shift in demand in recent months. Its Q2 numbers showed that Hewlett-Packard (HP) struggled to adapt to this, due to manufacturing and supply chain hold-ups. While the company’s notebook and PC sales were solid, peripheral sales struggled, especially printing revenues, with big falls in revenue due to office closures. In Q2 the company posted revenue of $12.5bn, down 11.2% from a year ago, although profits met expectations at $0.51 a share. HP still holds 21.8% of the global PC sales market, but is under pressure from some of its more nimble and cheaper peers, like Lenovo. Q3 expectations are for EPS to come in at $0.43 a share, which seems a little low.

Thursday: Against a backdrop of concerns about its precarious financial position, Rolls-Royce shares have continued to struggle since July’s Q2 update, despite optimism that the second half of the year would be better than the first. There has been speculation that it may come under pressure to offload its Spanish operation ITP Aero, while one of its major shareholders ValueAct has sold down its stake, over concern over the long-term viability of the business model. The impact on civil aviation and the grounding of commercial fleets has decimated its revenues, and could well lead to cash burn of over £4bn this year alone. Earlier this month the company reported a problem with another one of its engines, the XWB-84 which powers the A350, which on the back of its Trent 1000 issues, doesn’t bode well, and might suggest a wider problem with quality control. Quite simply this is yet another problem Rolls-Royce doesn’t need, and is likely to add further costs to an already strained business model.

There are signs of positivity with the recent deal with Reaction Engines to develop new high-speed hypersonic propulsion systems for civil and defence purposes, as Rolls-Royce looks to design new greener solutions for air travel propulsion. The company is overdue some positivity ahead of this week’s H1 numbers which aren’t expected to be particularly comfortable reading. The big question remains how much extra capital the company will need to raise in order to bolster its balance sheet, and whether it will be in the form of a rights issue or a disposal of assets.

Thursday: Formerly scheduled to take place in Jackson Hole, Wyoming, the symposium will now be held virtually with the theme “Navigating the Decade Ahead: Implications for Monetary Policy”. Markets will be looking for clues as to what steps the Federal Reserve might take in the event of another serious flare up in Covid-19 cases as we head into the Autumn. One of the concerns articulated by Fed chairman Jerome Powell at the last Fed press conference was that the central bank was hostage to events, as well as any progress on a possible vaccine. It is clear from recent events that the lack of consensus on fiscal policy is a concern for US central bankers, however with an election due in November there is very little the FOMC can do about that.

Last weeks Fed minutes didn’t offer much in the way of enlightenment other than a reluctance on the part of officials to pre-commit too much, in the way of possible policy options. In a speech in July, permanent Fed board member Lael Brainard warned of the risks of a second dip in the US economy so Fed officials are alive to the risks of complacency, with the virtual symposium potentially acting as an indicator for the Fed’s September meeting. A policy of pledging not to tighten until inflation is well beyond the Fed’s target of 2% is possible, as is a specific unemployment level, but as Mark Carney found at the Bank of England, such targets can be used to as a stick to beat you with if not reached.

Thursday: The last set of US GDP numbers showed an annualised decline of -32.9%, however, as with all GDP readings these are likely to be heavily revised in the coming months. This week’s Q2 revision is not expected to be any different, with the prospect that the number could be revised higher. While most of the economic hit took place in April, the sharpness of the rebound in May and June could lead to an upward revision of the latest numbers, with expectations of a modest improvement to -32.6%

Thursday: So far there has been little evidence of an economic impact to the ending of the $600 a week enhanced unemployment benefits package, which ended at the end of July. However last week’s sudden jump back over 1m may have concentrated minds on Capitol Hill, in the face of the end of the last stimulus package. The brief fall below 1m weekly claims, along with new record highs for stock markets may well have given rise to some complacency amongst out of touch US politicians. If there is another sharp rise in claims in this week’s numbers, the pressure to pass a new stimulus package is only likely to intensify, especially if stock markets start to look a little top heavy, which in some cases is starting to look to be the case.

Thursday: Whenever crisis strikes, advertising budgets are first to be cut, and it has been no different with the current virus-related slowdown. In Q1 WPP revenues declined 3.3%, largely down to the shutdown in China, which caused March revenues to drop 7.9% as the slowdown started to hit Europe. With Q2 set to cover its US and European markets, and the April shutdowns, the picture isn’t likely to get any better. Management also implemented a series of voluntary three-month pay cuts to reduce its operational costs, as well as suspending the dividend and the buyback programme. This week’s first-half update is likely to a much greater insight into what sectors are doing well, and which have cut back in terms of industry mix. The performance of its China operation is also likely to offer an insight into how quickly that region has rebounded from its Q1 shutdown.

Friday: The recent retail sales numbers in July would appear to point to a slowdown in US consumer spending, after two strong months of gains, which helped reverse the collapse in spending in March and April. This week’s personal spending numbers could well signal a similar slowdown in consumption spending, especially since various fiscal stimulus measures have come to an end. In the absence of any new measures this slowdown could well manifest itself further into August as well. Expectations are for spending to slow from 5.6% in June to 1.4% in July.

The online grocer will announce its half-year results on Thursday amid a slowdown in growth as consumers tighten their spending.

Read our preview of key economic and corporate events in the week commencing 18 July 2022, and view our company earnings schedule.