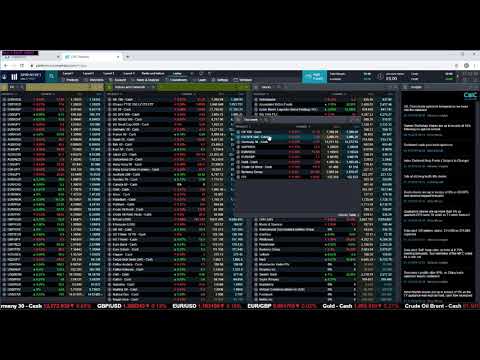 Watch our week ahead video preview, read our pick of the top stories to look out for this week (11-15 November), and view our key company earnings schedule.

In this week's video chief market analyst, Michael Hewson, looks back at this week’s gains in equity markets, the prospects of a US-China trade resolution, and the latest UK outlook from an economic and political standpoint. He also looks at key levels on the Germany 30, US SPX 500, UK 100, GBP/USD and Gold.

It's been a solid week of gains for global equity markets, against a backdrop of a vast improvement in investor sentiment about the prospects for a resolution in US-China trade relations. A note of caution though, as we’ve been here before, only to find that both sides have stepped back due to concerns they have given too much away. This is one of the major imponderables, as neither side will want to be seen to be losing face, thus inviting criticism at home. This may also help explain why China and the US haven’t outlined a date for a signing ceremony for any so-called phase one agreement. In the UK, the election campaign got underway in earnest and is likely to become increasingly vicious. We’ve had the incredible spectacle of former Labour MPs publicly lambasting Labour leader Jeremy Corbyn as being unsuitable to be prime minister, and urging voters to back the Conservatives.

Monday: Economic activity is unlikely to have picked up significantly since the minor 0.2% contraction seen in the second quarter of this year – with businesses holding back key investment decisions until the outlook around Brexit has become clearer. However, it’s doubtful that we’ll see a substantial improvement in this latest Q3 GDP print. Expectations are set for a modest rise of 0.1%, and a year-on-year rise to 1.4% – up from 1.3% in Q2.

Tuesday: At its most recent set of numbers, ITV’s profit fell to £310m and ad sales declined 5%. This was still better than expected for the first six months of the year, but it hasn’t changed concerns that expenditure on its new subscription service, BritBox, could be a mistake. Most of the programmes available on this platform are already available on many others, such as Sky and Virgin, and on channels like W and UK Gold, which are also included in other packages. In terms of expectations for Q3, the outlook is likely to be more positive. Advertising for the pre-October Brexit deadline, alongside the Rugby World Cup, is likely to have given ITV an earnings boost, especially as England reached the final. The start of ‘I’m a Celebrity’ should also help boost revenue in Q4.

Tuesday: While a great deal of the recent commentary around the UK economy has been uniformly pessimistic, it is easy to forget that wages have been rising at near to 4% on a rolling three-month basis, while unemployment has remained near to 40-year lows. At a time when the debate over Brexit has poisoned the political discourse, this has been a welcome relief to hard-pressed consumers. Combined with an inflation rate that has fallen below the Bank of England’s target rate, it’s been a positive story in terms of real incomes. On the flip side, economic activity over the past six months has been muted, with little to no economic growth to speak of, largely due to the political uncertainty being generated around the next moves in the Brexit debate. Expectations around this week’s numbers are for average earnings to remain steady at 3.9%, with unemployment also set to come in at the same level.

Wednesday: It’s been a difficult year for traditional British pubs, with Greene King taken over earlier this year as it battles against falling beer sales. JD Wetherspoon has had a slightly better time of it, with its share price strongly higher year to date, by over 25%. That doesn’t mean it isn’t finding life difficult, but it’s adapting to higher costs better than most. In September, the company’s sales rose, even though profit fell 4.5% to £102.5m last year. Chairman Tim Martin was bullish about the future, predicting that the pub chain would do well over the next few months, irrespective of the Brexit outcome. He was also confident about future sales, pledging to keep prices low heading into 2020, despite spending more on refurbishing the company’s pubs real estate.

Wednesday: In August, IT bellwether Cisco Systems saw its shares slide sharply after it warned on guidance, despite beating expectations for the previous quarter. Management’s concern centred around its China business, as revenue slid 25% in the quarter. This was largely due to the tensions surrounding US-China trade. Since then, Cisco’s shares have struggled to recover. However, sentiment between the US and China has improved since then, which may mitigate some of the concern. Expectations are for profit to come in at 0.81c a share, with around 1% revenue growth in Q1.

Thursday: Recent data from China appears to be showing early signs of a pickup in economic activity. The recent Caixin manufacturing PMI numbers had their best readings since March 2017. This is the third monthly expansion in succession, fuelling optimism that the Chinese economy may have hit a short-term bottom. If this translates into the rest of the Chinese economy, fears of further economic weakness as we head into year-end may subside. Retail sales have started to improve over the last three months, hitting 7.8% in September – the best number since June. Industrial production has also shown signs of improving – after hitting 4.4% in August, September’s reading jumped sharply to 5.8% With optimism around a minimal trade deal between the US and China slowly increasing, further improvements here could help push stocks even higher.

Thursday: The recent glide path for German economic data has been pretty much in one direction for most of the last three months. Manufacturing activity has been at its worst levels since the financial crisis, raising the prospect that the German economy is in a technical recession. The one bright spot has been services, where activity has remained in expansion territory, albeit on a slowing basis. This has raised concerns about weakening demand, which in turn, could see the economy stagnate at best. A weak reading could reinforce increased talk of fiscal stimulus, though the bar is likely to remain high. A minor contraction is unlikely to be enough to move the debate significantly in that direction, despite what ECB president Christine Lagarde might say to German politicians.

Thursday: The luxury sector has been one of many hit by concerns over US-China trade, as well as the unrest in Hong Kong. Optimism over new chief creative officer Riccardo Tisci’s debut at London Fashion Week last year, doesn’t appear to have translated into the sort of share price performance that has characterised its peers LVMH and Hermes. This has left Burberry shares trailing in their wake, leaving them with some serious catching up to do. In Q1, the company confirmed its outlook for the year after reporting £498m in Q1 revenue, with the Asia Pacific region outperforming. The risk is that the slowdown in China and disorder in Hong Kong will see a miss here, which in turn could prompt a downgrade to the outlook.

Thursday: In its last set of numbers from August, Nvidia reported revenue for Q2 that beat expectations, coming in at $2.58bn with profits of $1.24c. This was driven by a rebound in demand for gaming graphics chips, as well as chips for data centres. This offset concerns about a slowdown in China, as well as disruption from US-China trade tensions. For Q3, expectations are higher, with profit set to come in at $1.576c a share.