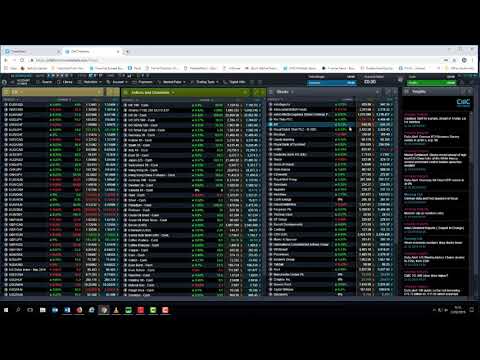 Watch our week ahead video preview (above), read our top nine stories to look out for this week (25 February-1 March), and view our key company earnings schedule.

Chief Market Analyst Michael Hewson looks at the latest developments in China-US trade, the prospect of an extension to the deadlines in Brexit, as well as the key levels in S&P 500, German DAX and GBP/USD and EUR/GBP.

Bank of England inflation report hearings (February)
Tuesday: This is another opportunity for MPs to quiz Bank of England Governor Mark Carney, and other senior central bank officials, on the banks preparations for Brexit now that we are just over a month away.

Next Brexit deadline 27 February, UK and EU macro backdrop, Powell Testimony and China trade
Wednesday: It's set to be another key week for Brexit developments. Prime Minister Theresa May is set to update parliament on the latest stage of the withdrawal agreement, with a view of getting a majority vote on any amended withdrawal agreement. In the absence of a new vote, we can expect MPs to try and block the option of a no-deal Brexit. The China-US trade deadline for an increase in tariffs falls is due on the 1 March, however, the current mood music suggests that could be delayed, or even deferred, which would be a welcome development. This does appear to be largely priced into the markets already. It’s also another big week for central bankers; Fed chair Jerome Powell is due to testify to US lawmakers on the state of the US economy. He can probably expect questions on how Fed policymakers see the next move on US rates against the backdrop of the US government shutdown, which might have had a negative impact on US Q1 economic activity.

ITV full-year results
Wednesday: The performance in ITV’s share price over the last two years has been more to do with a collapse in advertising revenue, as opposed to the performance of ITV Studios, which has remained the jewel in its crown. A year ago, the company’s full-year numbers showed a big drop in advertising revenue. While the World Cup and Love Island offered a brief boost to these figures last summer, the outlook has remained challenging. In July last year, CEO Carolyn McCall acknowledged this by announcing plans to invest £40m in scaling up UK and global production, as well as looking to deliver content direct to consumers. She said the focus would remain on cutting costs and growing its online presence. Bearing in mind the company’s limited budget relative to Netflix and Amazon, however, this is likely to be challenging.

Canada CPI (January) and GDP
Wednesday & Friday: It wasn’t too much of a surprise when the Bank of Canada failed to follow the US Federal Reserve’s lead in hiking rates in January. It was widely believed that the US central bank erred by raising rates in December, and that a lack of inflation in the Canadian economy was likely to result in a wait-and-see decision. Since then, inflation has shown little sign of picking up, with core prices stuck at 1.7%, while both monthly numbers declined in December. The Canadian economy also contracted in December, supporting the Bank of Canada’s cautious approach. The January numbers should show a modest pickup, however it’s unlikely to be enough to suggest a change of stance by the Bank of Canada with respect to rate policy, which will probably remain dovish.

Aston Martin Lagonda full-year results
Thursday: It hasn’t been the fastest of starts for Aston Martin Lagonda, following its debut on the UK stock market. Since the company launched its IPO in October the share price has declined, which has raised the question of whether it was overpriced. Despite seven bankruptcies in roughly 100 years, it has also enjoyed a mystical cachet for those who have charted its tribulations, and the cars have been venerated in a number of James Bond films. Aston Martin only recently returned to profit last year, with revenue of £876m and a pre-tax profit of £87m, after a whopping £163m loss the year before. The prognosis continued to look more positive in October, with higher demand in the UK, US and China, plus an average selling price up 11% to £160,000 per car, which helped to push first-half profit to £106m. The biggest risk remains around the global outlook at a time when trade tensions are rising, a factor which could hit sales.

Rolls Royce full-year results
Thursday: It’s been an up and down year for British marque brand Rolls Royce, having been beset by negative headlines around its Trent 1000 engine, which powers Boeing’s 787 Dreamliner. As a result, the company allocated additional resources to fix problems with its turbine blades. These costs are expected to come in well above £1bn, on top of the ongoing restructuring programme, which remains a work-in-progress under CEO Warren East. However, the company still expected to deliver 500 new engines for this calendar year at the time of its last update, at the end of last year.

JC Penney, Macy’s and Nordstrom Q4 results
Tuesday & Thursday: December’s US retail sales figures were a big wake-up call to investors. Despite the restructuring efforts undertaken by big-box retailers, the outlook for US retail remains challenging. While Amazon and Wal-Mart seem able to adapt to the changing outlook, the more traditional retail names have struggled, with the recent bankruptcy of Sears a case in point. This week’s numbers from JC Penney, Macy’s and Nordstrom should show whether this part of the US retail sector has stabilised, or whether there is further pain to come in terms of restructuring the business model.

US Q4 GDP
Thursday: Retail sales numbers for December showed that US consumers cut sharply back on spending at the end of 2018, and that’s before factoring in the January US government shutdown. The Federal Reserve did raise rates again in December, which might have impacted overall consumer demand, while stock markets also dropped sharply. If the latest Q4 GDP numbers show that the US economy is weakening sharply, it will increase additional concerns around its overall health. Global growth also continues to look weak, placing downward pressure on the US dollar.

Global manufacturing PMIs (February)
Friday: After several months of decline, global manufacturing purchasing manager indices (PMIs) have shown little sign recently that economic activity is starting to stabilise. Political instability and ‘yellow vest’ protests in France appear to have affected economic activity, while Germany’s manufacturing sector has been grappling with problems in the auto industry. With China manufacturing likely to have been disrupted by Chinese New Year, it’s doubtful that we’ll see much evidence of a pickup in economic activity in the February numbers. The weakness in this sector is likely to keep additional central bank monetary stimulus at the top of policy agendas.