The week ahead: ECB meeting, US non-farm payrolls, Workspace shares 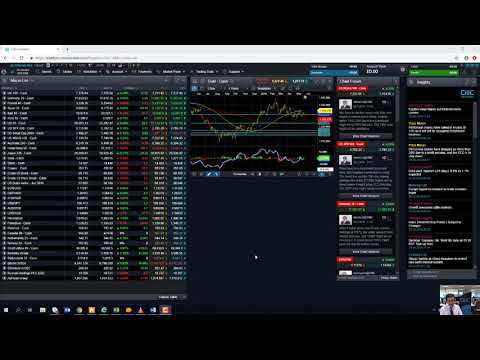 Watch our week ahead video preview (above), read our top eight stories to look out for this week (3-7 June), and view our key company earnings schedule.

Market Analyst David Madden examines the recent sell-off in stocks due to trade concerns and Italian debt worries, and looks ahead to some of next week’s major events, including Theresa May's resignation, President Trump's visit to the UK, the ECB meeting and US non-farm payrolls report.

Trump UK visit
Monday: President Trump arrives in the UK on Monday. Recent events are likely to make for a rather tense affair, after reports that the US could threaten to limit intelligence sharing over the UK government's relationship with Huawei and 5G. This is unlikely to be particularly welcome given the UK's current relationship with the EU, and could be used by the US president as leverage on any future trade relationship.

AO World full-year results
Tuesday: AO World's share price hit an all-time low in early April, when the group warned that profit would be at the lower end of expectations. The firm predicts European revenue growth of 32.3%, below the consensus estimate of 35%. John Roberts, who founded the company, returned as CEO this year and has cited Brexit as a reason for consumers holding off on buying big-ticket items like electrical goods. AO World stockpiled £15m of popular goods because of Brexit, and since then Mr Roberts has described the move as a ‘waste of money’. The company has expanded into the mobile phone market through the takeover of Mobile Phones Direct, and will launch its white goods rental business later this year.

Reserve Bank of Australia rate decision, Australia GDP & retail sales
Tuesday & Wednesday: The cooling Chinese economy has been felt in Australia and there has been increased chatter about the possibility of the central bank cutting rates by 0.25%, to 1.25%. RBA governor Philip Lowe recently said the board would consider cutting rates in a bid to get the unemployment rate, which is currently sitting at 5.2%, back below 5%. Mr Lowe believes that reducing the jobless rate will help drive up inflation, which has been dismal in 2019. The Australian financial regulator is considering loosening mortgage lending rules, and that is likely to assist the housing market which is under pressure after years of impressive growth. On Tuesday, the retail sales report will play second fiddle to the RBA, but it will provide a good gauge of consumer demand. Wednesday’s GDP update might be a damp squib depending on what the Australian central bank does on Tuesday, but the report could become more important should the RBA hold steady.

Salesforce.com Q1 results
Tuesday: Salesforce's fourth-quarter figures were largely positive as earnings-per-share (EPS) comfortably topped forecasts. Revenue was also slightly ahead of the consensus estimate, but its Q1 outlook weighed on sentiment. First-quarter EPS was predicted in the region of $0.60 to $0.61, lower than the midpoint consensus estimate of $0.63. It was a similar situation for revenue, with company predictions of between $3.67bn and $3.68bn below analysts' midpoint estimate at $3.69bn. Co-CEO and chairman, Marc Benioff, said the company is hoping to target revenue of $26-$28bn by fiscal year 2023, which would essentially involve doubling organic revenue over the next four years, equating to compound yearly growth of approximately 20%. Cloud computing has become a major industry, and Salesforce is performing well in that sector, but it will need to remain competitive to keep up with Microsoft and Amazon.

Eurozone inflation (May) & European Central Bank meeting
Tuesday & Thursday: At 1.7%, the current eurozone inflation rate is well below its target rate of 2%. The latest update showed that the core reading rebounded from 0.8% to 1.2%, its highest level since late 2017, so underlying demand is clearly picking up. On Thursday, the ECB are tipped to keep the refinancing rate at 0%, and the deposit rate at -0.4%. The central bank will launch a new round of targeted lending in September, and given the way things are panning out in the region, that can’t come soon enough. The announcement by the Trump administration that tariffs won’t be slapped on EU car imports for six months should allow some breathing space, but Brussels needs to come up with an acceptable offer to win over President Trump, otherwise they’ ll face the same treatment as China. Italy was recently in recession, and Germany's manufacturing sector is in deep contraction, so it's no surprise that demand is below forecasts.

Workspace full-year results
Wednesday: Workspace had a solid first half to the year as adjusted trading profit increased by 20%, with the 17% rise in rental income the largest factor behind the strong earnings. Profit-before-tax slid by 17.8%, but that was because of asset sales and smaller increases in property valuations. The interim dividend was lifted by 20%, which is a clear sign the company is confident in its ability to perform, and in January the group issued an upbeat trading statement, as enquiries and rentals per month increased by 5.7% and 14% respectively. For a property company, Workspace is performing well, bearing in mind that most property firms own retail sites, where the rise in online shopping has dented the sector. The lack of clarity around Brexit has also led to some firms being unwilling to sign long-term leases on offices, but given the flexible nature of Workspace's business, it is actually benefiting from Brexit in some regards.

US Beige Book
Wednesday: The Beige Book update provides an assessment of the US economy, which is generally in good shape: the jobs market is robust and growth levels are strong. Inflation is a little on the soft side though, and that suggests that demand isn’t so strong. The minutes from the latest Federal Reserve meeting made it clear the US central bank is keen to keep rates on hold for the foreseeable future. There is also some evidence that the US housing market is cooling, and the latest manufacturing and services PMI reports revealed a slowdown in the growth rate. There has been a growing belief that the Fed were too bullish when they hiked interest rates four times in 2018, and according to the Fed funds futures market, there is a 57% chance of a rate cut in September.

US non-farm payrolls (May)
Friday: The US jobless claims report is viewed by many as the most important announcement of the month. The headline figure is expected to be 190,000, which would be a sizeable drop from the 263,000 posted in April. Throughout 2019, the US has added 196,000 jobs per month on average, and if that trend continues it would indicate the economy is ticking along nicely. Last month, the jobless rate dropped to a 50-year low of 3.6%, and economists are anticipating it will creep back up to 3.7%. On a yearly basis, average earnings are tipped to hold steady at 3.2%. The earnings component has become a major part of the jobs report, as workers who earn more usually spend more, and that drives the economy along. With headline US inflation at 2%, workers are currently getting a real increase in wages. As the US labour market is so strong, any upward pressure on earnings might be a sign that employers are having to pay up to attract workers.

Canadian jobs data (May)
Friday: The Canadian jobs report for April was impressive, as the unemployment rate edged lower to 5.7% from 5.8%. The employment change saw an increase of 106,500, and the bulk of those jobs were full-time. The average hourly wage rate was 2.57%, and with headline inflation at 2%, it bodes well for workers. Last week, the Bank of Canada (BoC) kept rates on hold at 1.75%, meeting forecasts. The central bank said it would keep monitoring household spending, the oil market and global trade developments, which suggests they are keen to sit on their hands for the time being. The devil is in the detail for the jobs report, and full-time jobs and wages will be of particular importance.

Theresa May departs
Friday: The pound has continued to remain under pressure in the wake of the recent resignation of prime minister Theresa May, as it declines for the fourth week in succession. Next week she will step down from her position as PM and leader of the Conservative party, firing the starting gun on the race for her replacement. The recent EU election results have done nothing to alleviate investor concerns over a no-deal Brexit, which remains the current default position. Even in the event of a new election, the current polling still suggests no coherent position that could carry a majority in the House of Commons, hence the current sterling weakness and ongoing uncertainty.