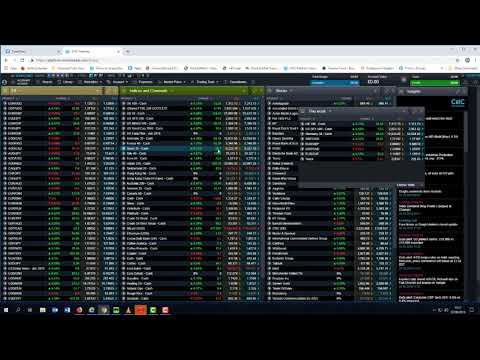 Watch our week ahead video preview (above), read our top ten events to look out for this week (10-14 June), and view our key company earnings schedule.

Finance ministers and central bankers G20 meeting
Saturday & Sunday: G20 finance ministers are set to meet in Fukuoka this weekend with the main topic of discussion likely to centre around trade, as well as how to tax big multinational corporations like Google and Facebook. These discussions are likely to set the tone for further discussions at the main G20 summit at the end of this month. It could also give US treasury secretary Steve Mnuchin the opportunity to try and reopen a dialogue with his Chinese counterpart Liu Kun.

China trade (May)
Monday: Recent China trade data for April was a bit of a mixed bag after some improvement in the March numbers, which saw exports rebound quite strongly. This appeared to be a bit of a false dawn, however, as April showed exports decline 2.7%. The rebound in exports was probably due to some front-running of increases in tariffs. As an arbiter of internal demand, imports also surprised to the upside, rising 10.3% and posting their first positive number in four months. The trade numbers are likely to be skewed in the coming months by front-running ahead of rises in tariffs, particularly since China announced that it would wait until 1 June before imposing tariffs on $60bn of US goods.

UK wages & unemployment (April)
Tuesday: The Brexit extension in March didn’t have quite the effect of boosting consumer spending in April as originally anticipated; however, the numbers were still largely better than expected. This was partly as a result of the timing of Easter and some decent weather. Unemployment has continued to drift lower, despite reports of job losses in retail and manufacturing in recent weeks. Inflation does appear to be drifting higher, largely as a result of increased fuel prices, and this may crimp consumer spending. Nonetheless, this week's wages numbers for April are expected to see growth come in at 3.3%, and unemployment remain steady at 3.8%

Crest Nicholson half-year results
Tuesday: A sluggish London and south-east housing market saw pre-tax profit slide by 15% at the end of the last fiscal year. Higher costs have eaten into margins along with lower sales prices, with the company struggling to offset the rise in building costs. To combat this, the company closed its London office, shifting its focus towards the Midlands and Chilterns. Management warned in January that they expected the first six months of this year to be difficult, given the approaching Brexit deadline. Sales are still expected to remain robust but attention should be directed towards the average selling price, and whether it comes in above the £393,000 figure at the end of last year.

Swiss National Bank rate decision
Thursday: The Swiss National Bank has kept interest rates on hold for several months now, with the headline rate deep in negative territory at -0.75%. Despite this, the Swiss franc has been one of the main beneficiaries of the sell-off in equity markets, rising across the board, with the exception of the Japanese yen. Swiss policymakers are unlikely to be happy with this state of affairs, but there is little they can do about it. This means that the most likely outcome is for a dovish statement, with the hope of limiting the deflationary effects of a strengthening currency.

Tesco Q1 sales and revenue
Thursday: Last year was a good one for Tesco, with a 34% jump in profit. Since those numbers came out the Tesco share price has slipped back to three month lows. If the UK’s number one supermarket is able to reproduce that kind of performance in the weeks and months ahead, it will be doing well. Thursday’s Q1 sales numbers are likely to be a reminder that the tough retail environment will remain a drag on profit margins over the next few months. This appears to have been borne out by the latest Kantar data, which showed that their supermarket share dropped to 27.3% at the end of last month from 27.7% a year ago. Once again this has been due to discounters Aldi and Lidl eating into its market share. This competitive environment has seen Tesco pull back from a number of its non-core operations, as it strives to keep a lid on its costs. The decision to pull out of the mortgage market and offload its mortgage book is just one such example of focusing on its core competencies.

Majestic Wine full-year results
Thursday: Oenophiles will be keeping a close eye, and hopefully raising a glass, to this week’s full-year trading update for Majestic Wine, the UK’s leading wine specialist. Majestic Wine shares have had a disappointing last 12 months, giving shareholders a permanent hangover after management found itself on the receiving end of Brexit uncertainty when it posted its half-year update at the end of last year. The merger with Naked Wines in 2015 doesn’t appear to have offered the synergies expected. The company swung to a loss in the first half of the year, as a tough retail market cut into its margins. Additional expenses in terms of stockpiling cost the company £8m, while the second half of this year is unlikely to offer much in the way of comfort. Consensus expectations are for revenue to improve by 6.6% to £507.3m, and gross profit to rise to £137.7m, with margins expected to decline slightly from a year ago.

Broadcom Q2 results
Thursday: Semiconductor share prices have taken a beating in the last few weeks, over concerns about the impact of tariffs on global business. In March, Broadcom saw revenue rise 8.7% year-on-year and 6.3% on the quarter. While this was below market expectations, it wasn’t by much, and was offset by the company guiding higher on revenue and operating margins. Management projected an increase to $24.5bn on revenue and 51% on margins. This seems optimistic given recent events and we could see a modest downgrade to forecasts. One advantage Broadcom has is its diverse business model, with franchises in storage, wired and wireless infrastructure, as well as software given its recent acquisition of CA Technologies.

China retail sales & industrial production (May)
Friday: The manufacturing sector has been a serial underperformer most of this year, and it is unlikely that the May numbers will be any different. Industrial production saw a strong rebound in March to 8.5%, however, this appears to have been a flash in the pan after April fell back to 5.4%. Retail sales also slowed in April after a big March rebound, coming in at 7.2%, the lowest levels in 16 years. There is no sugar coating the April numbers; they were dreadful, and investors will be hoping it was a one-off. If we don’t see a rebound in May, and in the absence of a dialling back in trade tensions, we could see further downside in global markets.

US retail sales (May)
Friday: For an economy that is growing at 3% annualised GDP, and with wage growth well above 3%, US consumers don’t appear to be in any rush to go on a spending spree if recent US retail sales numbers are any guide. In April and February, retail sales declined 0.2%, and while March saw a strong gain of 1.6%, this figure comes across as a significant outlier when looked at over a longer period. The big question is whether May will be any different? Based on the numbers it should be: unemployment is at multi-year lows and personal incomes are rising, which would suggest that May could see a stronger number.