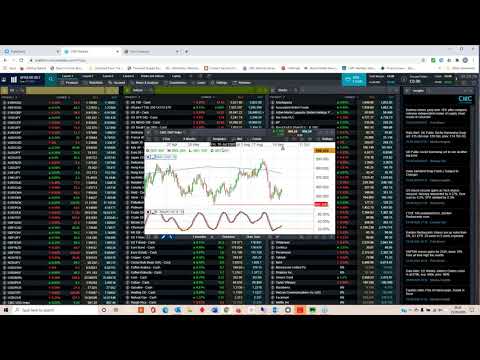 Watch our week ahead video preview, read our pick of the top stories to look out for this week (28 September - 2 October), and view our key company earnings schedule.

Michael looks back at another week of equity market weakness, and ahead to the latest US non-farm payrolls report, manufacturing PMIs, and the outlook for inflation in the EU. He also looks at the key chart points on the FTSE 100, S&P 500, Nasdaq, DAX, plus GBP, EUR and USD currency pairs, and gold.

Monday: The recent slide in the pound has been exacerbated by concerns that there could well be a collapse in talks between the EU and UK over the future relationship. Accusations of bad faith have gone to and fro over the past couple of weeks, with a lot of handwringing over the UK government's willingness to break international law. Putting aside the hyperbole about breaches of the withdrawal agreement, it's important to remember that while October has been touted as the deadline for any sort of agreement to be ratified, the likelihood is that these discussions will go to the wire, with the transition agreement due to come to an end on 31 December.

Tuesday: When Ferguson reported its half-year numbers in May, the UK operation was the main drag, resulting in management looking to spin off the underperforming arm under its old Wolseley name. However, the pandemic soon put paid to that idea in the short term. This underperformance saw revenues drop 4.7% in the first half of this year, with Q3 accounting for a 26.5% fall in the period to 30 April 2020, though this has improved since lockdown measures were eased. The Canadian operation also underperformed, with a decline of 16.4%, while the US managed to stay in positive territory revenue-wise, with a rise of 1.9%, with April acting as an anchor on the entire quarter. In July, the picture was slightly more positive, with US operations proving the most resilient, while UK lagged behind with a 29.1% year-on-year fall in revenue.

Tuesday: The phoney war between Donald Trump and Joe Biden comes to an end this week with the first presidential debate between the incumbent and the Democrat challenger. Much has been made of Mr Biden’s capacity to misstep when he speaks, and as such how he performs could be critical to how he's perceived across the nation. With the polls currently neck and neck, a decent performance  could prompt further nervousness in US equity markets, which have already declined four weeks in a row. It's no secret that the Democrats have a more interventionist stance towards business and the economy, with policies geared towards stronger policy action on competition, antitrust enforcement, privacy and cyber security. The Democrats also prefer the imposition of higher corporate taxes, along with the closure of a number of loopholes, which allow companies to minimise their tax liability.

Tuesday: Food retail has been very much in the crosshairs of the pandemic crisis, with the widespread shutting of coffee shops and takeaway venues at the end of March and throughout April causing a sharp downturn in revenue. In July, the company revealed a 45% fall in first-half revenue to £300.6m, sending it into a pre-tax loss of £65.2m, from a profit of £36.7m in the previous year. Not surprisingly, no interim dividend was declared as management took steps to shore up the balance sheet. On a more positive note, the summer months are likely to have been much better, especially with the chancellor’s 'Eat Out to Help Out' helping boost demand. The bigger concern given recent events is the prospect of further lockdown restrictions on a sector that is now only starting to get back on its feet.

Wednesday: It’s been a tough first half for Boohoo, after its share price was hit hard in July on reports that Jaswal Fashions, a factory in Leicester and a reported supplier to Boohoo, was operating below the required standards set by UK Health and Safety and paying below minimum wage. Boohoo strenuously denied any knowledge of malpractice, and announced it had engaged Alison Levitt, a top QC, to investigate claims around the supply chain and help restore the brand's reputation. Since then the Boohoo share price has recovered somewhat, however the damage done to its reputation along with the loss of a number of key social media influencers pulling their support for the brand, has stunted the appeal of the shares. An update on the findings of the independent review are set to be announced this week, along with an update on group trading for the period ending 31 August. This is likely to be an acid test in terms of how much damage July’s events have had on overall sales.

Wednesday: The lack of inflation in the euro area isn’t a new problem for the European Central Bank, with the recent rise in the euro acting as another deflationary drag on the central banks attempts to try and hit its 2% inflation target. At the most recent ECB meeting ECB President Christine Lagarde tried to navigate a middle ground with respect to the recent strength of the currency, however she appears to be at odds with ECB Chief economist Philip Lane who appears to be keen to keep a lid on the euro at 1.2000. In August annualised inflation slipped to -0.2% and a four-year low. It is becoming increasingly apparent that all central banks are facing huge challenges with their inflation mandates, and in the absence of a coherent fiscal response from EU policymakers the limits of the ECB’s ambition in respect of monetary policy is becoming ever more apparent. This week’s September flash numbers could see prices fall even further, though we are at least still above the record low of -0.6% hit in 2015.

Wednesday: The full scale of the economic damage wrought in Q2 is set to be laid bare this week with the final iteration of the impact the lockdown had on UK economic activity during April, May and June. The last reading showed a contraction of -20.4%, with April the low point in terms of the economic shock. As the economy slowly sputtered back to life in May and June, the availability of more recent data could well see this number adjusted back up above the -20% level. Even if it doesn’t, Q3’s data will in all probability help to reverse half of these losses as we head into the autumn. The bigger concern now is on whether the Q3 bounce back can be sustained into Q4 of this year.

Thursday: There has been increasing evidence in the last few weeks that the rebound in France and Germany is running out of steam, a trend that was reinforced even further in last week’s flash PMI numbers, with services a particular pressure point. In the most recent August PMIs, the numbers painted a mixed picture for the German economy, with services in particular showing a slowdown to 52.5, after a strong July performance. In France it was a similar picture with services slowing to 51.5 from 57.3, as rising infection rates prompted localised lockdowns and restrictions being imposed across the country. As we come to the end of Q3 it is clear that the recovery that followed the contractions in Q2 has been a robust one, with manufacturing continuing to hold up well if last week’s flash numbers are any guide. For all the relative resilience of the manufacturing sector it is also obvious that services are starting to slow. With the WHO warning of a serious situation in Europe and both France and Germany seeing contractions in their September flash services numbers, it is becoming clearer by the day that Europe could be on the cusp of long arduous winter. The tighter restrictions being imposed in the face of higher infection rates and the onset of colder weather would seem to confirm people’s worst fears. Winter is coming and it is likely to be a challenging one, in more ways than one.

Thursday: The Japanese economy has been a real laggard when it comes to its own recovery process in Q3. The various PMI numbers from across the manufacturing and services sector have shown little indication of any type of economic improvement of the like seen elsewhere in Asia, as well as Europe. With the Bank of Japan more active than any other global central bank in the Japanese economy. Last week we saw little evidence of an improvement in either manufacturing or services in the latest Jibun flash MPI numbers. This ought to be a concern for not only the Bank of Japan but also for new Japanese PM Yoshihide Suga.

Friday: The August payrolls report continued the trend of a slow a recovery in the US jobs market, with the unemployment rate falling to 8.4%, and its lowest level since the post lockdown spike to 14.7% in April. While this is welcome, we can’t ignore the fact that the US labour market looks radically different to how it did earlier in the year. We can’t even be sure that the unemployment rate is an accurate reflection of what is going on around the US as a whole. At his most recent press conference Fed chairman Jerome Powell touched upon this very topic when he said that the US central bank wasn’t even sure how high the real unemployment figure actually was. He said that given the volatility of the data it could well be 3% higher than the headline rate suggests, when underemployment and people who have dropped out of the workforce are taken into account. Expectations are for 865k new jobs to be added in September and the unemployment rate is expected to fall further to 8.2%, however recent claims data would appear to suggest that unemployment numbers might be starting to edge higher again.

UK retail sales in focus ahead of October flash PMIs

Watch our week ahead video preview, read our pick of the top stories to look out for this week (26-30 October), and view our key company earnings schedule.