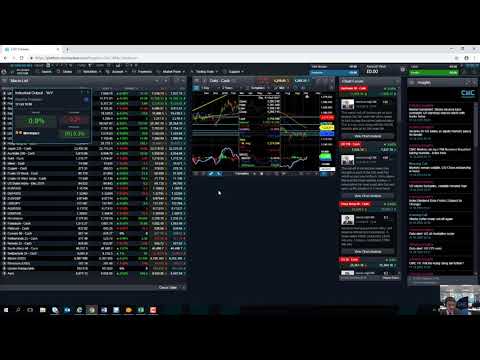 Watch our week ahead video preview (above), read our top nine stories to look out for this week (15-19 October), and view our key company earnings schedule.

Market Analyst David Madden discusses the recent volatility in equity markets, and looks ahead to the upcoming UK unemployment, wages and CPI reports.

US retail sales
Monday: The US has produced some impressive economic indicators recently. The Conference Board consumer survey hit an 18-year high, the ISM non-manufacturing survey reached its highest level since records began, and unemployment fell to its lowest level since 1969. However, average wage growth is trailing. The fact that the jobless rate keeps falling yet there isn’t upward pressure on wages suggests there is still slack in the economy, and employers don’t have to pay up to attract new workers. Higher earnings generally mean more spending, and that is what is likely to push the US economy to the next level. Traditional retailers are losing out to the likes of Amazon, which operate on a lower cost model, although this isn’t necessarily the best gauge of consumer appetite. The US economy is clearly heading in the right direction, but dealers would like to see strong consumer sentiment translate into improved retail sales.

Chinese PPI, CPI, GDP and industrial production
Tuesday & Friday: Broadly speaking, Chinese inflation has been rising since spring 2017 and the renminbi has lost ground in the past seven months. Traders will be keen to find out if the relatively weak domestic currency has anything to do with the rise in CPI, or if there’s a genuine increase in demand. The PPI rate has generally been moving lower since early 2017, and GDP has been cooling since 2010, but the rate of decline has been relatively slow. It could be because the country is moving towards a more services-based economy and away from heavy industry, but it does indicate the country’s hay days are over. Like other indicators, industrial production is no longer experiencing major growth, but it has been stable in 2018. The Peoples Bank of China has been accommodative in recent months, but more lax lending policies can lead to artificially high demand levels. High levels of personal debt will catch up with borrowers in the end, and it is not the way to build a truly robust economy. Traders will be keeping an eye on markets sensitive to economic change in China, like the Australian dollar, copper, mining stocks, and luxury brands like Burberry and Mulberry.

Netflix Q3 results
Tuesday: Netflix continues to attract new customers, but the rate at which it is signing them up is cooling, and investors are getting a little nervous. The stock hit an all-time high in June, ahead of the second-quarter figures in July. These disappointed investors as new customer growth rates failed to meet estimates. Profit and revenue continue to be strong, and the group will need to keep investing in quality content, as competition in the streaming service market is high. Netflix is up against tech titans like Amazon and Apple, while Disney is planning to launch its own streaming service in 2019.

UK unemployment, average earnings, CPI & retail sales
Tuesday, Wednesday & Friday: The jobless rate in the UK is currently at 4%, its lowest level since 1975, suggesting the jobs market is strong. Some economists will point out that the rise in the ‘gig economy’ has helped bring down the unemployment rate, and the labour market isn’t as robust has the headline figure suggests. The fall in the jobs rate has been much more impressive than the jump in wages. Average earnings (excluding bonuses) hit 2.9%, its joint-highest level in nearly three years. It would seem that British employers are not that desperate to bring in new staff by offering higher wages, and only when we reach that point could we then see a sizeable jump in earnings. The CPI rate is 2.7%, and after several months of declines, the core inflation rate is edging up, suggesting there is a genuine increase in demand, which bodes well for the economy. The retail sales report will also give us a good indication of demand.

Eurozone CPI
Wednesday: The preliminary CPI report for September jumped to 2.1%, up from 2%, while core inflation slipped back to 0.9% from 1%. The contradicting moves in the two indicators suggests demand is actually cooling, but higher commodity prices like oil drove up the headline figure. The eurozone has produced underwhelming economic indicators recently, driving the fear that the region is in an economic malaise. The European Central Bank (ECB) is aiming to wind down its bond-buying scheme this year, and interest rates are likely to remain on hold until at least late next year. The ECB will not be comfortable hiking rates until there is a respectable demand level in the region, and it appears that demand is currently going in the wrong direction. Traders also need to keep an eye on the political situation in Italy, as it could trigger another round of the region’s debt crisis, which could hurt demand.

ASOS full-year results
Wednesday: ASOS shares have fallen in recent months as the company is finding it difficult to live up to the high expectations of investors. Despite the share price falling 35% from its all-time high, it still has a significant price to earnings ratio of 64. In July, the online fashion house announced that monthly sales jumped by 22%, while analysts were expecting between 25.8% and 27%. The group also warned that full-year group sales will be at the lower end of forecasts. The share price is very sensitive to changes in forecast on account of the relatively high valuation. ASOS is confident it can achieve its annual profit target as the company is still expanding aggressively, and funds were diverted away from marketing towards its warehouse expansion, which demonstrates a confident outlook.

Federal Reserve meeting minutes
Wednesday: Last month the Federal Reserve hiked interest rates for the third time this year as expected. The Fed’s statement  was very similar to August’s update, but the mention of ‘accommodative’ monetary policy was dropped. The Fed upped its 2018 GDP outlook to 3.1%, from 2.8%, and the outlook for 2019 was raised by 0.1%, to 2.5%. Since the update, Fed chairman Jerome Powell announced that the US economy was still a long way from the neutral rate, and traders took this as a sign that more rate hikes are in the pipeline. The latest US jobs report was a little on the mixed side; unemployment fell again, but there was also a slight decline in average earrings, which suggests there is still slack left in the labour market.

Canadian inflation
Friday: The cost of living cooled to 2.8% in August, down from 3% in July, which was a seven-year high. The core CPI rate hit 1.7%, its joint-highest reading since October 2016, so demand is clearly strong. The strong oil price is driving up the headline inflation rate, but is also boosting underlying demand as the oil industry is big business in Canada. The latest Canadian jobs report was mixed. Unemployment dipped to 5.9% from 6%, and the employment change jumped by 63,300, but full-time jobs declined by 16,900, while part-time jobs rose by 80,200. The Bank of Canada (BoC) raised rates twice in 2018, and the inflation numbers could provide a clue as to whether they will hike rates at the end of the month. The BoC loosely follow the Federal Reserve, and as the Fed have hiked rates three times this year, Canada’s central bank may close the gap.

Goldman Sachs, Morgan Stanley and State Street Q3 results
Tuesday & Friday: In recent reporting seasons, traders have been keen to find out how banks are performing in relation to the financial markets. The fixed income, currencies and commodities (FICC) metric will be in focus, and with fairly low volatility levels in the markets in recent months, analysts’ expectations have also been on the low side. The yield curve on US government bonds has been steepening since early September, and while it’s unlikely to be reflected in the latest quarterly update, it’s likely to be beneficial to banks in the coming months, as it could equate to higher lending margins.