The Week Ahead: US CPI; Rolls-Royce results 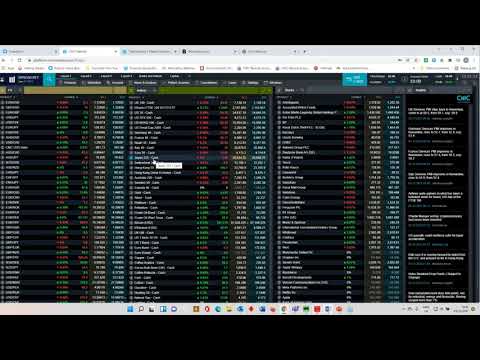 Read our pick of the top stories to look out for in the week commencing 6 December, and view our key company earnings schedule.

This week, Michael Hewson provides insights on US inflation ahead of the release of CPI data for November. And he analyses the likes of Rolls-Royce, British American Tobacco and GameStop as they prepare to announce their latest financial results.

The US consumer price index (CPI) was up 6.2% in October from a year ago, its highest level in 31 years. Core inflation, which excludes food and energy, increased 4.6%. The hope is that this could be the high-water mark for headline CPI, but the Institute for Supply Management’s various reports suggest that inflation is likely to remain high in the near term. This is supported by signs that US retailers have passed higher costs onto customers in the form of higher prices. Consensus estimates are for November CPI to rise to 6.7%, with core inflation up to 4.9%.

If these estimates prove correct, they could add to pressures on the US Federal Reserve to taper its asset-purchase programme at a faster rate. The Fed is now seen by many commentators as being behind the curve when it comes to inflation, although the recent slide in oil prices may buy the central bank some time. With the Fed meeting in mid-December, there has been much debate over whether the policy-setting Federal Open Market Committee will accelerate the wind-down of stimulus measures. In November, the Fed cut its monthly asset-purchase programme by $15bn, trimming $10bn from its purchases of US treasuries and $5bn from spending on mortgage-backed securities. The current pace of tapering would effectively end the programme in the middle of next year.

Rolls-Royce surprised the markets in August, reporting an unexpected half-year profit of £393m, beating consensus expectations of a small loss. This was helped by a better-than-expected £600m improvement in free cash flow, which – while still negative to the tune of -£1.17bn – was a marked improvement on a year ago. These results helped lift the Rolls-Royce share price, which is up more than 20% year-to-date, despite a recent dip. That dip was triggered by fears that rising Covid cases and a new variant could spell fresh travel restrictions, hitting demand for flights and potentially impacting Rolls-Royce’s jet engine business.

Rolls-Royce has taken steps in the last year to reduce head count and cut costs, and said in its half-year report that it was on course to make a further £1.3bn of annualised cost savings. However, the business continues to rely on the civil aviation sector, with a large proportion of its revenue linked to large engine flying hours (EFH). While EFH has improved following the return of transatlantic travel, it could still fall short of the company’s full-year target, which was for EFH in 2021 to reach 55% of 2019 levels. In the first four months of 2021, EFH stood at 40% of 2019 levels. Supported by demand for cargo and the maintenance of key routes, the figure increased in the subsequent two months to 43%. Meanwhile, Rolls-Royce delivered 100 large engines in the first half of the year, down from 137 a year ago.

Demand for international travel remains limited heading into winter, as governments reintroduce travel restrictions to combat the threat of new Covid variants. As a result of recent developments, investors may need to manage their expectations somewhat. Management insisted in August that once border restrictions were lifted, the recovery in international travel would help the company meet its target to be free cash flow positive by the end of 2021, and to have free cash flow of at least £750m by the end of 2022, and that EFH would exceed 80% of 2019 levels. At the very least, the timeline for achieving these targets has been pushed back. It’s possible that they may not be met at all. While that is a cause for concern, Rolls-Royce has achieved some notable victories in other areas of its business. The company secured a contract worth £1.9bn that will see its F-130 engines used to power the B-52 Stratofortress for the next 30 years. Rolls-Royce also announced that it has agreed a deal with Bain Partners to sell ITP Aero for €1.7bn, and won a government contract for its mini-nuclear reactor technology.

The British American Tobacco share price is down almost 7% year-to-date amid concerns earlier this year that the US was considering legislation to cut the amount of nicotine in cigarettes to a level that’s not addictive. This may have been a problem a few years ago, but these days it is less of a worry as the industry moves into other areas in order to bolster revenue. In June the company said it was increasingly confident that it would meet its £5bn target of New Category revenue by 2025, and 50m consumers of non-combustible products across its operations by 2030. The company also upgraded its constant currency revenue growth to above 5%, above the previous guidance of 3% to 5%, driven by optimism over rising demand for alternatives across all of its ranges and markets. This has been borne out by the growth in its Vuse product which in September became the world’s number one vaping brand by market share. The company is also looking to diversify its product range into CBD products after acquiring a 19.9% stake in Organigram, a leading Canadian cannabis provider.    Despite these developments, the shares have continued to struggle, not only because of the above-mentioned US legislation but perhaps also because of concerns over potential EU regulation and tax rules.

While lockdowns and the Chinese government’s zero-Covid strategy have disrupted China’s trade in recent months, the slowdown hasn’t been as marked as first feared. If, as suspected, the new Omicron variant is even more infectious than Delta, the zero-Covid policy may be doomed to fail. With warnings that disruptions at Chinese ports could impact deliveries in the runup to Christmas, businesses placed orders early. As a result, exports in October were up 27.1% year-on-year, down only slightly from September’s three-month high of 28.1%, as exports of machines and electrical goods recovered. Meanwhile, imports grew 20.6% year-on-year in October, up from 17.6% in September. Figures for November are expected to show a modest slowdown in export growth to around 19.8% year-on-year, which seems a conservative estimate. Import growth is expected to remain steady at about 20.6% year-on-year.

After the Reserve Bank of New Zealand raised interest rates by 25bps to 0.75% last month, attention now turns to the Reserve Bank of Australia. The question is, will the RBA follow suit? The Australian central bank has kept interest rates at 0.1%, with Governor Philip Lowe commenting last month that an interest rate rise in 2022 was unlikely, as the data and forecasts do not support a hike. The pushback was unsurprising given the rise in yields at the end of October. However, yields remain at those elevated levels, suggesting that markets don’t believe the central bank’s narrative. Lowe’s assertion that Australia doesn’t have an inflation problem lacks credibility, with Australian two-year yields still well above 0.6%. The RBA’s exit from yield curve control at the last meeting appears to recognise as much. On current pricing, yields suggest that a modest interest rate rise is in the works and will be increasingly difficult to push back against, especially as recent GDP numbers showed that Australia’s second Covid-induced economic contraction was less severe than feared. The country’s GDP fell by 1.9% in the three months to September, surprising economists who had expected a 2.7% drop.

Jack Daniel’s-owner Brown-Forman’s shares closed at $71.79 on 2 December, up from $67 at the start of October. This uptick comes after the company reported in June that full-year sales grew 3% to $3.5bn, helped by new brands such as Tennessee Apple. The company pulled its guidance in the wake of Covid, but kept the dividend. Sales of its Early Times, Canadian Mist and Collingwood brands also helped improve the company’s performance in its leading markets. In Q1, revenue received a boost as the EU and US agreed to postpone a planned doubling of tariffs on American whiskey to 50%, which had been due to come into effect on 1 June. Profits came in at $0.40 a share, while net sales rose to $906m. Negotiations to remove the EU’s 25% tariff on US whiskey remain ongoing, but if talks are successful, the removal of the tariff could further boost the company’s sales. Management expects full-year 2022 numbers to deliver mid-single-digit growth in underlying sales and operating income, though supply chain disruptions could be a headwind. Profits for Q2 are expected to come in at $0.52 a share.

The performance of the GameStop share price is not an accurate reflection of the company’s fundamentals. Although the volatility around this meme stock has subsided since the height of the trading frenzy in January, the GameStop’s share price is still up 900% year-to-date. Cut through the noise, however, and it’s clear that the company has been struggling for some time. Sales are down, as online gaming stores steal market share. While the Reddit day-traders have come to the rescue of a tired brand, the recent share price movements suggest that the business is in limbo. The company is taking steps to move towards a digital model, but this will take time. The company has brought in managers from Amazon and Walmart to address this shift. The co-founder of e-commerce company Chewy, Ryan Cohen, became chairman on 9 June, and has been charged with turning the business around.

The free publicity at the start of the year helped boost GameStop’s Q1 revenue by 25% to $1.28bn, and cut losses to $0.45 a share. However, the company still faces a long road back. In Q2, losses came in at $0.76 a share. More worryingly, revenue fell compared to Q1. Cost-cutting measures will not be enough to sustain a tired business model – revenue needs to increase as well. But revenue has been in decline since 2018 and remains weak. At this rate, GameStop will struggle to match last year’s revenue figure, and the company declined to offer guidance for Q3. The company bought itself more time in June, selling an extra 5m shares and raising another $1.1bn in the process. This was on top of the $551m it raised in April. Now it needs to start making money, though its shares may rise even if it continues to run at a loss. After all, down is the new up these days where meme stocks are concerned. Losses are expected to come in at $0.46 a share.