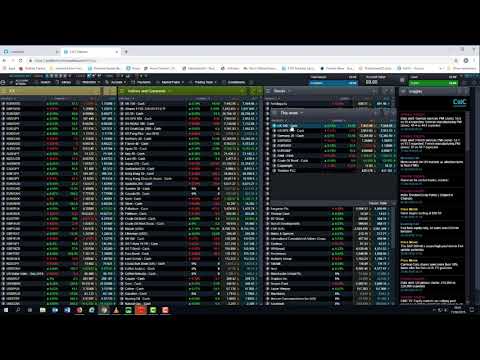 Watch our week ahead video preview (above), read our top ten events to look out for this week (24-28 June), and view our key company earnings schedule.

Chief Market Analyst Michael Hewson looks at the key moves in a week where global central banks made a dovish pivot. He also looks at the slide in yields and oil prices, the record highs on the S&P 500, and the prospect for further gains as Presidents Trump and Xi get set to meet at the G20 summit. He also assesses at Trainline's IPO and full-year number from Carpetright.

Carpetright full-year results
Tuesday: When Carpetright announced its first-half numbers at the end of last year, the costs were eye watering. Losses totalled £11.7m, 65 stores closed, with another 11 set to close in the next few months. But the company also announced that the refurbishment program for its remaining stores was helping it to return better numbers than expected. The hope appears to be that a slowing housing market will prompt consumers to spend money on improving their homes, as opposed to moving to new ones. In April the company posted a very positive update saying that revenues were moving towards positive territory, prompting the Carpetright share price to more than double to 36p, though since then we’ve lost most of those gains. Read more

FedEx Q4 results
Tuesday: The decline in the FedEx share price in recent weeks probably reflects a concern that a slowing global economy will drag on revenue and profit. It was a worry earlier this year, particularly in China as well as the US, with China sales data at 16-year lows. There were differing signals when it comes to official US retail sales data, especially when compared with the upbeat sales numbers reported by the likes of Walmart and Amazon. In recent months, US retail sales have picked up, which should be a good thing for FedEx. In Q3 its numbers missed estimates and profit expectations were downgraded, with global factors and a weak Europe cited as reasons. Another downside this quarter is that it found itself caught up in the US-China trade spat, after being accused by Huawei of deliberately misrouting two packages from Japan that were supposed to go to China, but ended up in the US. Profits are expected to come in at $4.90c a share.

Micron Technology Q3 results
Tuesday: Chipmakers and semiconductor stocks have been at the centre of the US-China trade war in recent months, as the impact of tariffs hit their global business model. The recent downgrade by Broadcom has only served to amplify these concerns and with Micron chips a big seller to China’s Huawei, accounting for 13% of its revenue, we could see a significant miss as well as a possible downgrade in these latest numbers. Profits in the coming months are also likely to be significantly lower, unless the company can offset the loss of Huawei business elsewhere. Q3 profits are expected to come in at $0.81c a share. Read more

Stagecoach full-year results
Wednesday: It's been a bumpy few months for the Stagecoach share price. Earlier this year the company revised its profit forecast higher, citing a strong performance from its rail division. Having exited the East Coast franchise, the rest of its rail division saw a rise of 1.4% in the 44 weeks to March. Revenue from its 49% stake in Virgin Rail rose by 6.7%, while its buses division also showed an improvement of 3.4%. With the shares near multi-year lows, the question that needs to be asked is whether the shares could go any lower?

Trainline IPO
Wednesday: Unconditional trading starts this week for Trainline and it's one of those rare beasts, an IPO which is actually profitable, which probably means it won’t be very popular! Valued at an estimated £1.68bn, at an offer price of 350p a share, the Trainline share price rose sharply on its first day of conditional trading to well over 400p. The company made a profit last year of £10.5m on revenue of £3.2bn, following three years of losses. The company is raising £75m in order to help improve the technology, and potentially expand into other areas of travel, like buses and aviation. In Europe, the percentage of train tickets bought online is still quite low at 39%, which means the scope for revenue growth is substantial.

RBNZ rate decision
Wednesday: At its last meeting the RBNZ cut rates to a new record low of 1.5%, which was pretty much expected. The bank also downgraded its guidance for the next 12 months, saying that another rate cut could be on the way, citing the US-China trade dispute as a major drag on the economy.

Nike Q4 results
Thursday: Nike’s share price managed to post a new all-time high in April in the wake of its Q3 numbers. The company is still seeing decent growth, particularly in China where revenue rose 24%. There don’t appear to be any trade war hangovers here, or signs of a slowdown across any of its regions. There was growth in all of its major markets, and while the US lagged behind, total revenue overall rose by 7% from a year before. Profit also beat expectations in Q3, coming in at $0.68c a share, with expectations for Q4 expected to come in at $0.66c a share.

US Q1 GDP (final)
Thursday: We're not expecting too many surprises from this number after the unexpected revision higher in the previous figure to 3.2%, from 2.3%. Higher-than-expected local government spending helped boost the bigger revision, along with higher inventories, which may not be matched in Q2. Expectations for Q2 have been more mixed, but whichever way you look at it, Q1 is still expected to show a US economy that is ticking along nicely, with only a slight slowdown expected in Q2.

G20 meeting
Friday: The dominant question over the past few weeks has been whether Presidents Trump and Xi of China will meet in an attempt to draw a line, and defuse the recent deterioration and rise in tensions in the US-China trade talks. Market optimism is high that some form of detente will be arrived at which keeps the prospect of a deal on the table, and this appears to be borne out by the pledge to resume talks between the respective sides negotiators in the past few days. The current optimism about a deal still seems a little misplaced, however there is optimism that we won't see a negative escalation. President Trump has consistently maintained that he is ready to put tariffs on the remaining $300bn worth of Chinese goods in the event no progress is made over this weekend.

UK Q1 GDP (final)
Friday: Much has been made of the better-than-expected performance of the UK economy in Q1, which came in at 0.5%. It is true that some of the improvement can be put down to front-running demand ahead of the end of March Brexit deadline. This may cause a slowdown in Q2, which means the Q1 numbers may not be that instructive. The business investment numbers are where the story is at the moment, and they look ugly, currently at -0.9%. We need to see some evidence of an improvement here.