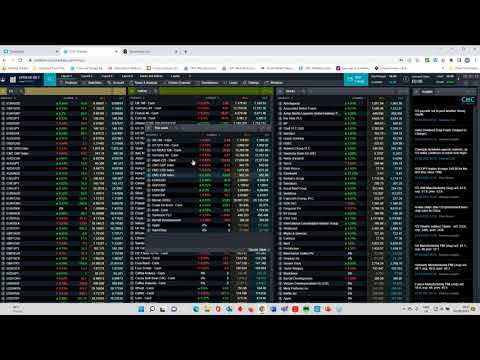 OUR TOP THREE EVENTS FOR 5-9 SEPTEMBER:

Apple’s launch event at its California headquarters is expected to see the company unveil the iPhone 14, a new Apple Watch series and other products. The annual launch event, which tends to draw a live online audience of millions, sets Apple up for the crucial last three months of the year when its sales typically peak amid increased consumer spending around Thanksgiving and Christmas. That said, this year’s holiday trading period could be challenging given the tough economic backdrop.

Apple’s new iPhones are expected to be powered by upgraded chipsets and are likely to feature improved battery life and more powerful cameras. Apple recently raised a few eyebrows when it began offering discounts on its highest spec iPhone 13 in China as the company seeks to run down inventory ahead of the upcoming product launch.

In the month following last year’s event, which took place on 14 September, the Apple share price dipped, before rallying to a one-year high in the final two and a half months of the year. So far this year, Apple’s stock has fallen by around 13.6% – a better performance than that of tech peers such as Microsoft (down 22%), Amazon (down 26%) and Google parent company Alphabet (down 25%). Apple’s Q3 results, covering the three months to 25 June, were impressive, with revenue up 2% year-on-year at $83bn.

Big or very big? That is the question facing the European Central Bank as it gears up for another rate rise. After the ECB raised interest rates by a larger-than-expected 0.5 percentage points in July, many analysts expected a further half-point increase at this month’s meeting – a move that would push the ECB’s headline rate into positive territory for the first time since 2014. However, after inflation in the eurozone rose to a record 9.1% in the year to August, hawkish ECB policymakers are now calling for an aggressive 0.75 percentage point rate hike on Thursday. The ECB has a freer hand than previously after it announced in July that it was ditching forward guidance on rate rises.

Alongside the July rate hike, the ECB also unveiled its Transmission Protection Instrument (TPI) – a new bond purchase scheme designed to prevent financial fragmentation in the euro area and to protect vulnerable, heavily indebted member states such as Italy from being disproportionately affected by the increase in borrowing costs. In her press conference, ECB president Christine Lagarde said that each member state’s eligibility for protection under the new scheme would be decided by the governing council on a case-by-case basis. To be considered eligible, countries will need to meet a set of criteria including compliance with EU fiscal rules, sound and sustainable macro policies, and an absence of severe macro imbalances. This creates an odd paradox. Italy – a country that the scheme is supposed to protect – is unlikely to meet these criteria. But if Italy did meet the criteria, it arguably wouldn’t need to be included in the scheme.

Meanwhile, growing expectations that the ECB could raise rates by 0.75 points have stopped the euro from falling significantly below parity with the US dollar. However, the ECB could face a more serious problem when markets try to push Italian 10-year yields back above 4%, which would represent their highest level since late 2013. We’ll know then whether TPI has teeth or is just jawboning.

Up almost 30% this year, shares in Darktrace spiked in August on speculation that US private equity firm Thoma Bravo might buy the cyber-defence company. The reports did not put a figure on a possible bid. Darktrace’s full-year results announcement should shed light on whether the company is open to a takeover bid. Thoma Bravo has until 12 September to formalise an offer or withdraw.

After Darktrace went public in April last year with an IPO price of 250p, the shares soared to a peak of 1,003p during intraday trading on 24 September. However, the stock then fell sharply and currently trades for around half that record high. It remains to be seen whether the stock can live up to investors’ earlier expectations.

Still, the company itself appears to be performing well. In July Darktrace raised its outlook, forecasting full-year revenue of $417m, up 48% year-on-year amid increased demand for cyber security, and guided a profit margin of 19.5%. Darktrace also said that it expects to see recurring revenues rise between 31% and 34% for the upcoming financial year, as its customer base has grown to 7,400 clients.

Over the summer, tourism provided a boost to the services sector in Italy, Spain and France. However, even as many people travelled abroad for the first time since the onset of the Covid-19 pandemic, forest fires and widespread travel disruption acted as a drag.

Italy’s services purchasing managers’ index (PMI) registered a reading of 48.4 in July, down from 51.6 in June. A figure below 50 signals contraction.

The UK’s services PMI defied reports of a gloomy economic outlook, registering a reading of 52.5 for August, down only slightly from 52.6 in July. Meanwhile, in the US the picture looks mixed. The ISM services PMI increased to a three-month high of 56.7 in July, while the S&P services PMI fell to 44.1 in August from 47.3 in July.

Having been behind the curve on rates in the first quarter of this year, the RBA spent Q2 playing catch-up. Even now, in the final month of Q3, Australia’s central bank remains slightly behind the curve relative to some of its peers, notably the Reserve Bank of New Zealand.

In August the RBA raised the cash rate by 0.5 percentage points to 1.85%. That decision followed half-point rate hikes in June and July, and a quarter-point increase in May. It seems likely that Tuesday’s meeting will deliver a fourth successive half-point rate hike.

There is still plenty of scope for the RBA to raise rates after the country’s consumer price index rose 6.1% year-on-year in Q2, accelerating from 5.1% in Q1. The Melbourne Institute’s inflation gauge has also moved higher, up 5.4% in the year to July versus an increase of 4.7% in June. An update on this inflation measure is due out on Monday, the day before the RBA’s meeting.

Estimates suggest that inflation will peak at 7.75%, with further rate increases set to be guided by the data. The RBA has outlined a similar stance to other central banks, saying that it will work on a month-by-month basis. The biggest risk for the RBA remains the Australian housing market, which is looking increasingly wobbly as house prices decline. Building approvals fell 17.2% in July.

The Bank of Canada surprised the market in July when it raised interest rates from 1.5% to 2.5%. Bank of Canada governor Tiff Macklem signalled that further rate increases were in the pipeline. Estimates suggest that the central bank will raise rates by a further 0.75 percentage points on Wednesday, with the US Federal Reserve expected to raise its fed funds rate by a similar amount later this month.

Wages in Canada are up 5.4% in response to the surge in inflation, which was running at 7.6% in July. According to a June report by the Canadian Federation of Independent Business, employers are planning on raising wages by 3.7% over the next year to address higher prices and a shortage of workers.

The July trade numbers for July hinted at the Chinese economy’s struggle to adapt to the government’s zero-Covid policy. While export growth continued to recover in July, jumping to 18% on an annual basis and beating expectations after a weak Q2, import growth remained meagre, increasing just 2.3% year-on-year, up from 1% in June but missing expectations of a 4% rise.

This lack of impetus can be partly attributed to a lack of confidence among Chinese consumers, as well as to a slowdown in the property sector. The government already appears to have thrown in the towel on its 5.5% GDP target, with reports last month saying that it should now be considered a guide. In reality the target has been wishful thinking since April when Shanghai and other parts of the country went in to lockdown amid a surge in Covid cases.

Given that China’s government is unlikely to relax its zero-Covid policy, stop-start restrictions seem set to continue to throttle the rebound in domestic demand. The effect is perhaps best illustrated by recent retail sales figures. Retail sales grew only 2.7% year-on-year in July, down from 3.1% in June and well below forecasts for 5% growth.

Shares in UK housebuilders have struggled this year, weighed down by a gloomy economic outlook and rising interest rates, even though the property market itself has remained resilient. Down almost 50% year-to-date, Barratt’s share price has fallen to levels last seen in September 2020, despite a positive pre-close update back in July.

For its last fiscal year, Barratt’s adjusted profit before tax is expected to come in ahead of forecasts of between £1.05bn and £1.06bn. Total home completions have returned to pre-pandemic levels with 17,908 this year, an increase on 2021’s 17,243. For the next fiscal year Barratt says it expects to grow total home completions by between 3% to 5%, with forward sales of 13,579 homes worth a total of £3.62bn. It would appear that investors don’t share this enthusiasm. There is concern over the sustainability of margins at a time when double-digit inflation is squeezing homebuyer incomes.

GameStop’s Q1 numbers, released in June, showed that losses had widened to $157.9m. Although revenue grew 7.9% year-on-year to $1.38bn, sales of hardware, including games consoles, fell on an annual basis, highlighting the challenges facing the company as life returns to normal and out-of-home activities become an option once more.

Since its June update, GameStop has continued to tread a difficult path. In July, the company carried out a 4-for-1 stock split in July, CFO Mike Recupero left the company, and bosses announced a new wave of job cuts. In August, the company launched a non-fungible token (NFT) marketplace, which looks like a gamble given the implosion in the NFT market over the last few months. The shares, volatile as usual, are down 23% this year. Losses for Q2 are expected to come in at $0.35 a share.

The wheels have fallen off this pandemic winner in remarkable fashion. The DocuSign share price topped $300 last year, but the shares are now trading at just above $56, back where they were before the pandemic in 2019. An earnings downgrade in December last year triggered a share price plunge, since when the shares have continued to fall. The stock is down more than 60% this year.

In June the shares suffered another slump as Q1 adjusted profits fell short of expectations, despite the company reporting that revenue had grown 25% to $588.7m.

DocuSign has said that it expects to see revenue of $600m to $604m in Q2, and full-year revenue of $2.48bn. However, the share price woes suggest that there is much investor scepticism regarding the company’s direction of travel. That said, a deal agreed with Microsoft in June that will see DocuSign tools made available within Teams, Office 365 and other Microsoft applications should boost DocuSign’s growth prospects. Profits for Q2 are expected to come in at $0.42 a share.