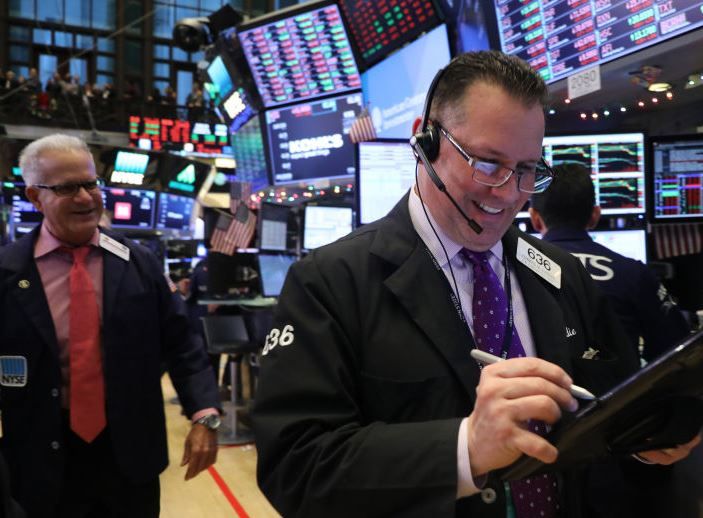 European equity markets are lower as we approach the end of the trading day.

Sentiment was already weak before the US non-farm payrolls report was announced, and even though the update was dreadful, the markets had a relatively muted reaction to the numbers. Last month 701,000 jobs were lost in the US, while the consensus estimate was for 100,000 job losses. The unemployment rate jumped from 3.5% to 4.4%, and average earnings came in at 3.1%, an improvement on the 3% posted in February. It is possible the colossal surge in US jobless claims in the past two weeks meant that dealers had prepared themselves for a reading far worse than what economists were expecting.

Tullow Oil shares have surged today after the company confirmed it has access to $700 million in a credit facility. The oil exploration company aims to cut capital expenditure by $300 million as a way of conserving cash. The stock has been hammed recently on account of weaker oil prices, but the major rebound in the energy markets in the past 24 hours has brought about a dramatic change in sentiment. BP and Royal Dutch Shell are actually lower as it seems that profit taking form yesterday has hit the big name oil stocks.

ITV announced cost cutting plans this morning. Executive directors and the management board will see the largest drop to their pay packets as they will not receive a bonus for 2020, in addition to that, they will take a voluntary pay cut of 20% during the lockdown. Should the lockdown go beyond 30 June, the pay cut will be reviewed. Non-executive directors will also take a 20% pay cut. Across the whole group, a hiring and salary freeze has been imposed.

Stagecoach has seen a drop-off in business in light of the health crisis. Commercial sales at its local regional bus operators are 15% below normal levels. In terms of mileage, the situation is even worse, as it is 50% below normal levels. Stagecoach plans to furlough roughly 55% of their bus drivers and engineering staff, and the company plans to curtail capital expenditure too.

Transport stocks are higher across the board as the Department of Transport (DoT) have put forward a £167 million support package for bus operators in England. The scheme will last at least 12 weeks, and the wider package is £400 million.  The government’s aim is to ensure that services don’t grind to a halt as many essential workers depend on them. Group Go-Ahead Group confirmed that passenger numbers on local services are down 90%. The firm said that senior management will take a 20% cut to their pay packages during this challenging period. FirstGroup welcomed the DoT announcement too.

BAE Systems said the coronavirus crisis had no material impact on the business in the first-quarter, but in the second-quarter, the company saw ‘significant’ disruptions. The group reassured the markets that it has a strong cash position, in addition to a £2 billion credit facility. The 13.8p dividend will be deferred. The firm intends to make the payment but the timing will depend on the economic climate. BAE Systems will issue a guidance at an appropriate time, but given the current levels of uncertainty, we could be waiting a while.

Ryanair said that full-year profit after tax, excluding exceptional items, will be in the region of €950 million and €1 billion, which would be at the lower end of expectations. Flight restrictions in March caused a 48% fall in air traffic. Full-year traffic increased by 4% to 149 million passengers, undershooting the 154 million passenger target. The air fleet will be grounded in April and May – this will bring about an exceptional cost of €300 million. Ryanair revealed a cost cutting strategy, which includes, deferring capital expenditure, suspending share buybacks, and imposing a 50% pay cut for all staff in April and May. No guidance was offered because of the uncertainty of the situation.

H&M shares are offside as the company expects to post a loss in the second-quarter. The lockdowns have had a terrible impact on the company’s performance as sales in March tumbled by 46% on an annual basis. The firm believes the social distancing restrictions should speed up the rate of expansion of the online division – which saw a 17% jump in sales in March. Operating expenses for the second-quarter will reduced by 20-25%, and capital expenditure will be revised down.

Stocks are lower on the day as traders are worried about the coronavirus, and the economic impact of the lockdowns on the US economy. The jobs market has been clobbered recently but the reaction in the equity markets hasn’t been that much. It is almost as if traders are immune to the abysmal updates. Not all the news has been bad, as the ISM non-manufacturing services report came in at 52.3, topping the 44 consensus estimate. The February reading was 57.3, but at least the March level showed positive growth.

Tesla shares are driving higher after the company posted solid production figures last night. The group delivered 88,400 vehicles in the quarter, and that topped the 79,900 forecast. Last year the group said it would easily exceed its 2020 production target of delivering 500,000 vehicles, and the group haven’t changed their outlook despite plant closures on account of the Covid-10 crisis.

Constellation brands announced respectable fourth-quarter figures. EPS were $2.06, exceeding the $1.65 forecast. Revenue for the three month period increased by 5.9% to $1.9 billion, which topped forecasts. The group didn’t offer a guidance, which isn’t surprising given the health emergency. The group is in a strong position in terms of financing as it has access to $2 billion in credit.

The US dollar saw a jump in volatility on the back of the jobs report but it is firmly higher on the session, despite the dreadful labour data. It appears the greenback is acting as a safe-haven play. EUR/USD has been driven down by the dominance of the dollar, but the latest economic reports from the euro-area played a role too.

The services PMI data from the major eurozone economies were terrible, but the readings from Spain and Italy were particularly bad. The final reading of Spanish and Italian services PMI reports were 23 and 17.4 respectively. Italy is the epicentre for the Covid-19 crisis in Europe, and it is reflected in the report. The awful reading makes one wonder how the country will be able to bounce back after this health crisis – seeing as it is already heavily indebted. The French reading was very bad too as it came in at 27.4, while the Germany metric was 31.7.

GBP/USD has been hit by the stronger US dollar also. The UK services PMI for last month was 34.5, which narrowly missed the 34.8 forecast. Today’s update was slightly worse than the flash reading of 35.7.  The pound has held up relatively well versus the greenback lately, but now it seems as if that has come to an end.

Oil has surged again on the speculation there will be a large production cut in the near-future. It was reported that President Trump will meet with the leaders of the US oil industry later today – there have been calls for the US to cut output. On Monday, the members of OPEC+ will meet to discuss the prospect of a 10 million barrel per day cut. There has been chatter that it might be difficult to get all parties involved to agree to such as major cut in output.

Gold is off the highs of the session but it is comfortably above the $1,600 mark. The metal has been assisted by the risk-off sentiment recently. Dealers are keen to snap up the metal as the latest economic reports suggest the global economy is in for more pain in the near-term. Gold is being propped by supply concerns too due to the closure of refineries in Switzerland.