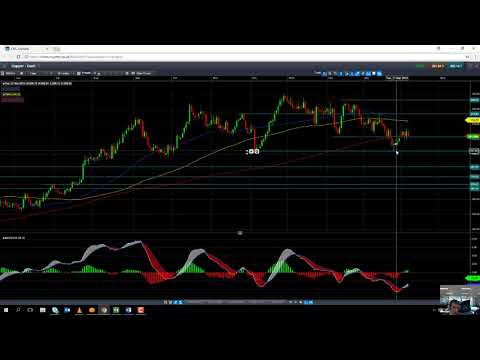 Our market analyst, David Madden, provides his thoughts and analysis on this week's events.

View his week ahead video, the top stories for this week, plus our key company earnings schedule. David looks ahead to the Federal Reserve minutes and the earnings from US banks.

Chinese CPI and PPI
Wednesday: Broadly speaking, the CPI rate in China has been rising for the past year, and last month it jumped to its highest rate in over four years. The remainder of the Chinese economy has been performing above par, but nothing outstanding, and it is possible firmer oil and gas prices have contributed to the jump in inflation. In contrast, the PPI rate has been sliding in recent months, which suggests demand is weak at the factory level, and this could bring about a cooling of inflation in the medium term.

Tesco full-year figures
Wednesday: The British retailer had a record Christmas in terms of sales. On a same-store basis, sales increased by 1.9% in the UK and Ireland over the festive period. However, underwhelming general merchandise sales and the collapse of wholesaler Palmer & Harvey took the shine off the results. The CEO Dave Lewis stated that those issues have now been resolved. The latest figures from Kantar showed that Tesco’s sales growth for the 12 weeks until 25 March was 2.4%, joint highest out of the big four supermarkets in the UK.

UK manufacturing production, industrial production and construction output
Wednesday: The announcement that the UK will enter a transitional period after it leaves the EU in March next year has boosted sterling. The fact that two of the nine members of the Bank of England voted in favour has also assisted sterling, and the economic indicators are firmer. Unemployment is falling, wages are rising and the services sector is still expanding, so traders are still bullish on sterling.

Federal Reserve minutes
Wednesday: The Fed will release the minutes from the latest meeting where interest rates were hiked by 0.25%, meeting expectations. The US central bank also stated it expects at least two more interest rate hikes in 2018. At the start of the year, there was a lot of chatter that the Fed could hike rates four times in 2018, and the minutes could provide a better insight into what the US central bank might do in terms future monetary policy.

Wells Fargo, JP Morgan and Citigroup all reveal first-quarter figures
Friday: The banking sector has been hit by falling trading revenue as lower market volatility and tighter regulation has led to a drop in fixed income, currency and commodities earnings. In the latest reporting season the major US banks had one-off tax bills in relation to the new tax laws in the US, and now that is out of the way, we could see reduced tax bills. The recent interest rate hike by the Fed should assist the banking sector, as a higher interest rate environment helps lenders.