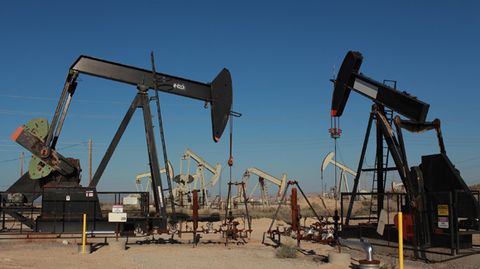 The correction in oil had been dragging on stock markets and leading the recent downdraft in world markets and the rebound in oil has brought support to stock markets as well. Asia Pacific and European indices have stabilized with the FTSE up 0.4% (helped by its higher weighting in energy companies and possibly falling Sterling) and the Dax down 0.4% US markets are slightly positive with the Dow and SPX trading up about 0.2%. Better than expected China service PMI and German industrial production has also helped to shore up support for stocks.

Even though earnings season doesn't start until next week, we could see significant action in individual stocks and sectors today. Traders may look to energy stocks for confirmation or rejection of the commodity price rebound. Potential merger troubles may also drive action amid rumours that the Pfizer/Allergan pharmaceutical deal may be about to be called off and reports that the US government may oppose the proposed merger between oilfield service providers Halliburton and Baker Hughes. Valeant Pharmaceuticals may also be active again today after the company rallied yesterday on the news that is has not additional restatements to make and has disbanded the committee that had been reviewing its finances.

Economic news for North America is due out later in the day than usual which could keep markets hopping through the day. CAD could be active around the Ivey PMI report due mid-morning with Canada employment due on Friday. Action in crude oil may also influence trading in CAD and other oil sensitive currencies. So far today, CAD is down about 0.3% against USD and JPY and up about 0.3% against GBP.

This afternoon, minutes from the last FOMC minutes which could influence USD trading a bit, but probably won't be a huge event. The minutes may give more colour as to why the Fed decided to slow its rate normalization program but they likely won’t change speculation on future rate hikes since so many Fed speakers since then, including Chair Yellen and many of the doves at the Fed have coalesced around a projection of 2 rate hikes this year in recent weeks.

There have been no major announcements in North America so far today.

Europe set for a slow start to the week

Goldilocks returns as US jobs report lifts yields, stocks and the US dollar

Europe set for a slow start to the week

​European stocks finished last week with more record highs for the FTSE 250 and the Stoxx 600, while the FTSE 100 posted its best weekly gain since June,

Goldilocks returns as US jobs report lifts yields, stocks and the US dollar

European stocks have finished the week with more record highs for the FTSE 250 and Stoxx 600, with financials leading the gainers as a result of this afternoon’s US jobs report.