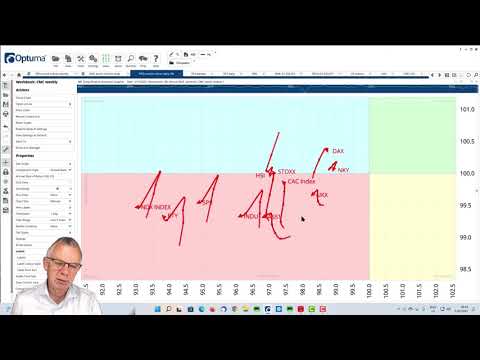 Looking at the Relative Rotation Graph of stock markets around the world, below, we can see a big split between the US and the rest of the world.

Taking the MSCI world index as a benchmark, the tails for the Nasdaq (NDX) and the S&P 500 (SPX) are in the lagging quadrant, while the Dow Jones Industrials Index (INDU) is in the weakening quadrant. All three indices are travelling in a negative direction, pointing towards the bottom-left corner.

The negative movements of US markets are offset by the tails for Asian and European markets which are predominantly moving towards the top-right corner. More importantly, they are located to the right of the US tails.

Taking the above graph and zooming in on daily price trends, we get the below price comparison chart. Here, it becomes clear that all major stock markets are now in downtrends when measured in absolute price terms.

Focusing on the S&P 500, as shown in the chart below, the big topping formation and the breakaway from it indicate that the dominant trend on the weekly time frame is now down for this index.

Zooming in on the daily S&P 500 chart, which shows more granular detail, we can see that an initial low was set around 3,900 after the break. The rally out of that new low was not able to get back to the breakout level, suggesting that sellers came back early and did not want to wait for the market to return to its breakout level.

The S&P 500 was resting at that new low after Thursday’s close. A break below will very likely accelerate the decline and send the S&P even lower. A small positive sign comes from the relative strength index (RSI). It is showing a positive divergence which usually signals a pause in a decline or rally.

Given the weakness over the longer-term timeframe and overhead resistance nearby, we have to judge any rally, if one materialises, as a temporary recovery within the prevailing downtrend.

The RRG below shows the current constituents of our Germany Large RRG Momentum+ basket. At the moment, this is the only share basket that is underperforming its benchmark over a 30- and 90-day period. All other baskets are ahead of their respective yardsticks.

BFSA is inside the improving quadrant (top-left), but seems to be slowing down, as the tail is getting shorter because daily readings are getting closer to each other. In a weak market, this can lead to a rotation back down to the lagging quadrant (bottom-left), without rotating into the leading quadrant in the top-right corner.

The weekly chart for BFSA, below, shows what’s happening in more detail. The stock is breaking down from a long and broad range. As a result, the upside potential for this stock is now very limited, while the downside is wide open and a price target can be pegged around the level of the 2018 peaks near €46.


In contrast, RWE is breaking higher, as the below chart illustrates. The stock is above the overhead resistance level that was formed by the peaks in March and early May. RWE now has plenty of room to the upside, while the downside seems well protected by the former resistance area that should now start to act as support.