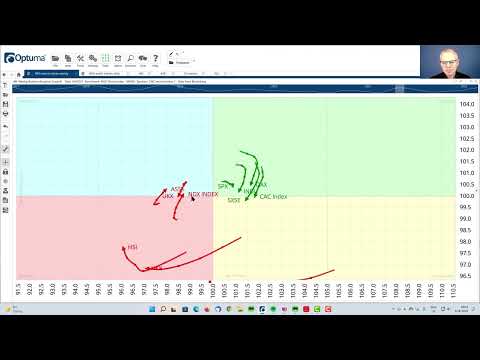 The Relative Rotation Graph® below shows the rotation for some major stock market indices against the Morgan Stanley Capital International (MSCI) world index as the benchmark (centre of the chart). The image gives a good view on how markets around the world are moving vis-à-vis each other.

Today I want to focus on two tails.

The first one is for Hong Kong’s Hang Seng index (HSI). This one is inside the improving quadrant but recently started to roll over and head down again, back towards the lagging quadrant.

These rotations where a tail remains on one side of the RRG usually indicate that a strong trend is at work.

The rotation from lagging into improving and then back into lagging again reflects a recovery within the existing relative downtrend.
The second tail I’d like to look at is the one for Australia’s ASX 200  (AS51). This tail just moved into the leading quadrant and is currently rising on both scales of the RRG which indicates a continuing pickup in relative strength, which is backed by positive momentum.

In order to get a more granular view for those rotations we can zoom in on the same universe of markets and draw a daily RRG, as shown above.

Here we find the HSI inside the lagging quadrant, confirming the negative rotation of this market as seen on the weekly graph. The two-day hiccup is not yet material enough to change the prevailing negative trends. It’s also the lowest reading on the JdK RS-Ratio scale.
The Australian ASX 200 index (AS51) is on the opposite side, inside the green leading quadrant at the highest RRS-Ratio reading and recently hooking down.

Given the longer term rotations, both markets seem to be in a countertrend move at the moment but are likely to get back in sync with their weekly trends in the next few days or weeks.

The final check should always be on the price chart. For the HSI, the weekly chart above shows that this index dropped below an important long-term support level two weeks ago and is now bouncing back, with that old support level starting to act as resistance.

The area around 21,500 will very likely start to act as a barrier in the coming days. Potentially this barrier could stretch to 23,000, but in any case the upside potential for the HSI seems limited for the time being.

The ASX 200 paints a different picture. The daily chart for this market, above, shows that a higher low has recently been put in place and that the previous high is now challenged as resistance.

The higher low suggests that buyers were happy to get back into the market at higher levels, which is needed for a market to push higher. Once the previous high around 7,300 can be taken out, we will have a new sequence of higher highs and higher lows in place, unlocking fresh upside potential.