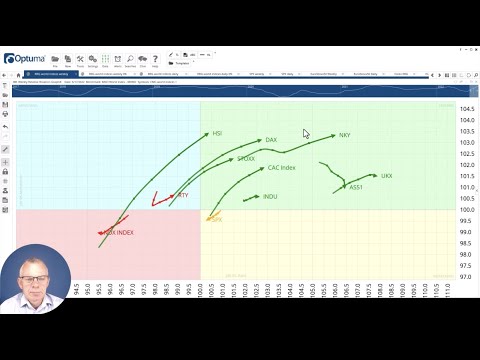 At first sight, the Relative Rotation Graph (RRG) below seems to suggest that most major stock markets are on the up. Most of the arrowheads are in the leading quadrant and heading north-east, indicating that the markets they represent are in relative uptrends versus the benchmark Morgan Stanley Capital International (MSCI) world index.

However, do not be fooled by this image. The markets in the leading quadrant are not going up in price. Yes, they are outperforming the MSCI, but they are still struggling. For example, the FTSE 100 [UKX] has fallen almost 3% this week.

A key point to bear in mind is that these are Relative Rotation Graphs – they show performance relative to the MSCI. The three arrowheads on the left-hand side of the chart represent US stock indices: the S&P 500 [SPX], the Nasdaq 100 [NDX] and the Russel 2000 [RTY]. Because these US markets account for a large proportion of the MSCI world index, their declines cause the smaller markets to move in the opposite direction.

The RRG below shows the same universe of stock market indices, but here 0% return is the benchmark. This RRG is therefore essentially a price-based comparison, comparing the performance of the various securities against a benchmark that is stable and never goes down.

This chart paints a completely different picture. Now, all tails apart from the FTSE 100 [UKX] are on the left-hand side of the graph, signalling that they are falling in price

The S&P 500 continues to move in a rhythm of lower highs and lower lows – a classic downtrend. The index has just broken another important support level near 3,900. This break may have cleared a path for more downside price action, potentially putting the next area of support at around 3,500, and possibly even as low as 3,300.

As we know, old support levels often return as resistance in the future, so the upside potential for the S&P 500 is now limited to the breakout area near 3,900, arguably creating unfavourable conditions for long positions.

From a relative perspective, the EuroStoxx 50 [SX5E] is moving into the leading quadrant on the RRG at the top of this article. However, if we look at price, it’s a different story.

The weekly chart below shows that the index is currently breaking important support in the area around 3,500. The next major support level is below 3,000. Again, the conditions for outright long positions appear unfavourable.

The below RRG shows the currencies of the G10 group of nations, using the US dollar as a benchmark. The message that leaps off the chart is one of USD strength.

The arrowheads for all currencies are in the lagging quadrant, and the dominant direction of travel is towards the south-west, between 180-270 degrees. This shows that the currencies are losing ground, in terms of both RS-Ratio and RS-Momentum.

Given that this is a weekly RRG, we are looking at longer-term trends here. We are therefore unlikely to see a significant change of direction in the near term.

EUR/USD at a critical juncture

The strength of the US dollar is perhaps best illustrated by the monthly EUR/USD chart below.

If that floor is broken in the coming weeks, more downside potential will be unlocked. That could bring EUR/USD below parity, potentially generating further headwinds for US stocks.

Read our preview of key economic and corporate events in the week commencing 16 January 2023, and view our company earnings calendar.