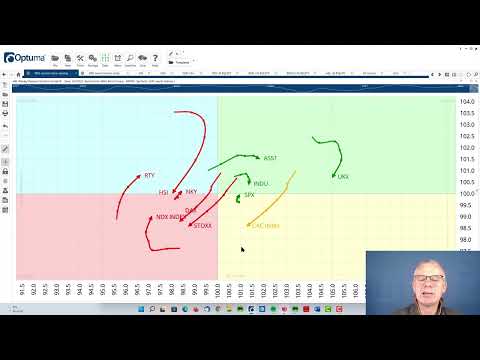 A few tails that stand out because of their weak rotations are HSI (Hong Kong), DAX (Germany), STOXX (Europe), and CAC (France).

On this weekly RRG they are all travelling in a negative direction, heading south-west towards or already inside the lagging quadrant.

The UKX tail is inside the leading quadrant at the highest reading on the JdK RS-Ratio axis. This tail is also losing relative momentum, as measured against the Y-axis, but from a much higher level of relative strength, suggesting that it is a temporary setback within a longer term rising relative trend.

A similar process is underway for the HSI tail. It is still inside the improving quadrant on this daily RRG but starting to roll over. Once this tail starts to pick up negative momentum again, it will reinforce the weakness for the HSI tail on the weekly RRG and push it deeper into lagging.

All in all, these markets seem to be continuing their relative downtrends vis-à-vis other world stock market indices.

The UKX tail presents a different story. On the weekly RRG it is inside the leading quadrant and at the highest RS-Ratio reading. This makes it the strongest market in this setup. The recent decline in momentum as seen on the weekly tail is magnified on the daily RRG, where the UKX index is located inside the lagging quadrant and recently started to curl back up again.

If this improvement can continue and move the UKX tail north-east back towards the leading quadrant, we will have both the weekly and the daily RRGs back in sync at a positive heading.

The RRG above shows the current constituents of the RRG Momentum+ basket. This daily RRG shows a shorter term rotation, allowing us to highlight some potentially interesting stocks for the coming week.

Inside the leading quadrant and moving at a strong RRG-heading are Rio Tinto [RIO], Shell [SHEL], and Energean [ENOG].

Rio Tinto is still trading below overhead resistance, around the 6,200 mark, and needs to break beyond that barrier to trigger further upside potential.

Shell broke out of its trading range two weeks ago and tested that former resistance as support last week. As long as the price manages to stay above 2,050 there is plenty of upside potential with limited downside risk.

Energean probably has the most pronounced chart. After breaking its previous high, that former resistance got tested as support followed by a strong bounce higher off that level. The rhythm of higher highs and higher lows is clearly visible. A push above the most recent high at 1,236 is likely to give the stock another boost.