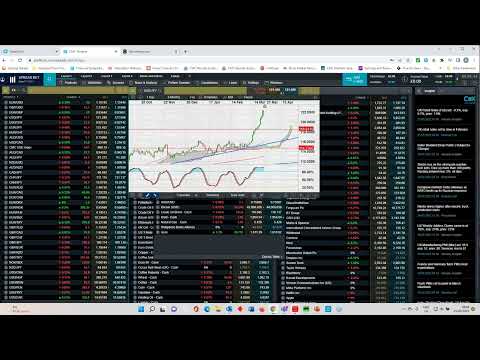 We’ll be paying close attention to two key economic indicators in the US – the core personal consumption expenditure (PCE) index on Wednesday, and non-farm payrolls on Friday.

Core PCE, known for being the US Federal Reserve’s favourite measure of inflation, is expected to have edged higher in February, potentially making an aggressive interest rate hike more likely at the Fed’s next policy meeting in May. Meanwhile, the US jobs report for March is set to underline the strength of the country’s labour market as it recovers from the impact of Omicron, laying a platform for what the Fed expects will be a “series” of rate rises this year.

Plus we pick out the latest results from Irn Bru maker AG Barr, FTSE 250 housebuilder Bellway, and more.

As expected, the US Federal Reserve raised interest rates by a quarter of a percentage point from near-zero levels at its policy meeting on 16 March, as the central bank tries to tame the highest inflation rates the country has seen in 40 years. One Fed policymaker, St. Louis Fed President James Bullard, wanted an even more aggressive rate rise. Most policymakers expect the federal funds rate to rise to between 1.75% and 2% by year-end, implying that interest rates will rise by a quarter of a percentage point at each of the Fed's six remaining meetings this year. The expected range leaves open the possibility of one rate rise of half a percentage point, perhaps at the Fed’s next meeting in May.

In a recent post on the St. Louis Fed website, Bullard argued that the funds rate needs to be at 3% by the end of this year, since the Fed’s preferred measure of inflation, the core personal consumption expenditure (PCE) index, remains well above the Fed’s target rate of 2%. In the year to January, the PCE index rose 6.1%, up from 5.8% in December, while core PCE – which strips out food and energy costs – increased 5.2%, up from 4.9%. This week’s February numbers are expected to see inflation rise even higher, with the PCE index set to rise 6.4% and core PCE predicted to hit 5.5%. This could increase the odds of an aggressive rate rise in May.

The US jobs report in early March showed that the US economy added 678,000 jobs in February, smashing expectations for around 400,000 new jobs, while the January figure was revised higher to 481,000 jobs created, up from a previous total of 467,000. The data indicated that the US labour market is in rude health, though come what may the Fed was going to raise interest rates in March anyway. Also in early March, payroll processing firm ADP announced that private payrolls were up by 475,000 jobs in February, as it revised its January data from a contraction of 301,000 jobs to an increase of 509,000 jobs – a startling swing of 810,000 jobs that dramatically altered analysts’ picture of the US labour market.

The last jobs report also showed that the unemployment rate fell to 3.8% in February, while in an equally encouraging development the labour force participation rate rose marginally to 62.3%, its highest level since March 2020 when the figure was 62.7%. Current trends need to continue if we are to get back to the pre-pandemic level of 63.4% that we saw in February 2020.

The only cloud on an otherwise positive jobs report hovered over average hourly earnings, which grew 5.1% in the year to February, down from 5.5% in January. As inflation soars, that’s not ideal for workers and politicians who are concerned about the rising cost of living.

This week’s payrolls report for March is expected to highlight another strong month for hiring patterns. Vacancy levels remain high at over 10m jobs, while weekly jobless claims remain close to 50-year lows. Against this backdrop, estimates suggest that another 450,000 non-farm payrolls were added to the US economy in March, while ADP is predicted to report that 400,000 jobs were added. The unemployment rate is forecast to fall to 3.7%, and average hourly earnings growth seems set to climb back towards 5.5%.

The most recent eurozone inflation numbers saw consumer price growth rise to a new record high of 5.8% in the year to February, up from 5.1% in January, while core CPI – which removes prices of energy, food, alcohol and tobacco – grew to 2.7%, up from 2.3% a month earlier. That was the highest reading for core inflation in the euro area since records began in January 1997. Nevertheless, the gentler growth in core prices, when compared to headline inflation, may offer the European Central Bank some degree of wriggle room when it comes to monetary policy. However, there is a faction of ECB policymakers calling for policy tightening to come sooner rather than later.

With input prices rising across the bloc, and jumping more than 25% in Germany and Italy according to recent data, estimates suggest that EU CPI soared to a new record high of 6.3% in March. Core CPI is forecast to climb to 3.1%. The ongoing inflationary surge will make it increasingly difficult for the ECB to push back on calls for interest rate hikes this year, though any hike would put pressure on more indebted EU members such as Italy.

US consumer confidence has been heading downwards for several months now, though it’s not been a particularly reliable indicator of consumer spending patterns. The last two months have seen a sizeable rebound in US retail sales, yet that has not been reflected in consumer confidence surveys, while forward inflation expectations have gone up. Put simply, while US consumers may be spending more, their concerns about the economy are rising due to surging energy prices. In February the consumer confidence index stood at 110.5, down from 111.1 in January. It is expected to fall to 107.8 in March on the back of further rises in energy and food prices.

A year ago, Irn Bru maker AG Barr saw full-year profits before tax fall to £32.8m, with revenue also lower at £227m as the closure of pubs hit sales. However, there is hope that the reopening of pubs and hospitality venues last summer brought an uplift in Barr’s sales. Irn Bru gained international attention at the Cop26 climate summit in Glasgow in November, where it was the only fizzy drink available to delegates at the host convention centre. Despite the publicity, AG Barr’s shares have risen only a modest 3% over the last 12 months.

In its most recent trading update in February, the company said that revenue for the year was expected to come in at £267m, ahead of the guidance given in Q3, while profits before tax are expected to come in at around £41m. Revenue could be on track to beat levels last seen in 2019, pre-pandemic. Operating margins have also improved and are expected to increase from 14.8% to 15.6%, despite higher commodity prices, though inflation may impact profits going forward.

Although the housing market has been going great guns over the last 12 months, the share prices of UK housebuilders have not kept up. FTSE 250 constituent Bellway has seen its share price fall almost 25% over the past year. At its most recent trading update Bellway reported that underlying demand was strong, with reservation rates up by 5.8% to 202 per week, and cancellation rates at 13%. Help-to-buy properties fell to 18% of total reservations, a sharp reduction on the 41% seen in 2021. Half-year revenue is expected to rise by 3% to £1.77bn, with first-half completions rising to 5,694, up marginally from 5,656, on an underlying operating margin of 18%. The order book had a total of 6,628 homes with a value of £1.94bn, with average selling prices expected to rise by 2.8%. Bellway is expected to say that it’s on course to increase output by 10% this financial year, with further growth in 2023 taking completions to around 12,200 homes.

Although Micron released a decent set of Q1 numbers last time out, the shares have slipped back. Profits in Q1 came in at $2.16 a share, on revenues of $7.69bn – a rise of 33% from the year-ago period. Dynamic Random Access Memory (D-RAM) sales accounted for 73% of total sales in the quarter, which isn’t surprising since D-RAM is the most common type of memory used in PCs.

In terms of its guidance for Q2, the company said it expects to see revenues of $7.5bn, with gross margins expected to be at 46%, and operating expenses of $975m. Micron cited tightness in supply chains as a risk, although it did expect to see an improvement. However, this was before the Russian invasion of Ukraine, which may well pose a further challenge to supplies. Profits are expected to come in at $1.95 a share.

The most recent reading of US Q4 GDP confirmed that the US economy had bounced back strongly after a fairly disappointing Q3. The second of three readings put Q4 GDP growth at 7%, up from 6.9% in the first estimate. Growth was driven by a rebound in hiring, as well as a strong recovery in both manufacturing and services activity, despite the end-of-year disruption from Omicron, which saw weekly jobless claims rise sharply.

US companies ordered goods early in Q4, front-running demand to iron out supply chain issues and rebuilding their stock ahead of the Thanksgiving and Christmas periods. This week’s third and final iteration of Q4 GDP may see a further upwards revision from 7% to 7.1%, despite weak personal consumption rates.

US-based Walgreens Boots Alliance, which owns American retail pharmacy chain Walgreens, and the Boots brand in the UK, has been at the forefront of the US vaccine rollout. During Q4 Walgreens administered 13.5m vaccines, helped by a $5.2bn investment in VillageMD, a primary care company that is opening clinics inside Walgreens stores. This investment appears to be part of a strategy to transform it from a pharmacy into a larger health care company, in a manner that can see doctors write out prescriptions on the premises.

After Walgreens reported its Q1 numbers, its shares slipped back despite beating expectations on revenues and profits. Revenues came in at $33.9bn and profits totalled $1.68 a share, with the company raising its forecasts for the year as customers bought test kits and got booster jabs. The number of vaccinations in the quarter rose to 15.6m, though the company warned that costs were also rising, with wages up about $120m, as competition for workers increased.

Its Boots business witnessed a 16.3% improvement in sales, driven by online orders. There have been rumours that Walgreens is looking to offload its Boots business in a deal that could be worth as much as £7bn. Private equity buyers are said to be interested, including US asset manager Apollo Global Management. Boots is a key part of the UK’s health infrastructure, with 2,200 branches, so any possible deal is likely to attract scrutiny from the UK government, who would be mindful of the risks of possible store closures. Profits are expected to come in at $1.34 a share.

After a weak finish to 2021, economic activity in Germany picked up in the first two months of this year, with both manufacturing and services activity performing well. That said, this doesn’t chime with weak industrial production and factory gate prices. With input costs surging since the end of last year, one has to question how reliable some of the recent PMI data actually is. The latest German factory gate prices for February showed a record rise of 25.9% year-on-year, while the corresponding measure in Italy hit 41%. This direction of travel is expected to continue for German and French factory gate prices, and is likely to prompt shutdowns in some of Germany’s key industries, whose key export markets are in China and Russia.

Read our preview of key economic and corporate events in the week commencing 24 October 2022, and view our company earnings schedule.

Read our preview of key economic and corporate events in the week commencing 17 October 2022, and view our company earnings schedule.