The Week Ahead: US and UK CPI; ASOS, Burberry and US banks 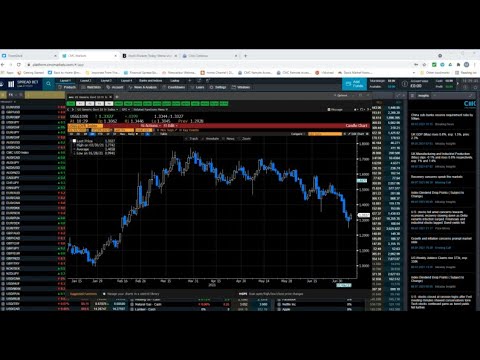 Read our pick of the top stories to look out for this week (12-16 July), and view our key company earnings schedule.

Michael looks back at the recent volatility in equity markets and the sharp decline in bond yields. He also previews CPI inflation data from the US and UK, China Q2 GDP, retail sales from the US and China, plus the latest key company earnings from the UK and US.

Tuesday: Markets have been quite choppy over the last few weeks, with the recent sharp rise in inflation exerting upward pressure on short-term rates. There is a concern that while the US Federal Reserve may consider the sharp rise in prices to be transitory and subject to base effects, there are a growing number of investors who fear that these pressures might become more persistent.

US CPI has jumped sharply from 1.4% at the end of 2020, to 5% in May, significantly above expectations. There’s a threat of more to come if PPI prices are any guide. Core prices have also surged to 3.8%, from a similarly low level. A component of the recent increases was used car and truck prices, which have risen sharply along with higher energy costs.

While Fed officials have admitted that inflation has been higher than initially anticipated, they still remain confident that these pressures will subside. As a reminder, May PPI jumped to 6.6%, its highest annual level in over 10 years. Expectations are for a rise of 5%, with core CPI which excludes food and energy expected to rise from 3.8% to 4%.

Wednesday: Dunelm is another retailer that has been able to ride out the worst effects of the pandemic, despite the various store closures and restrictions it has had to contend with over the last 15 months. When the company reported back in April, total sales were down 16% from this time last year, at £236.6m. This shouldn’t be a surprise given that stores were closed for all of its third quarter. To offset that, digital sales rose 92.4%, with total sales up by 10% at £956m year-to-date.

Dunelm’s store real-estate will have reopened in Q4, with the potential for a huge jump in pent-up demand. Management said they expect to end the year modestly ahead of full-year profit estimates of £120m-£125m, even with the repayment of the furlough money which was announced in February. Having paid an interim dividend of 12p a share, could management be tempted to pay a final dividend as well?

Wednesday: One of the main concerns worrying investors this year has been the potential for a sharp rise in inflationary pressures. These concerns have become more amplified in the wake of supply chain and Brexit-related disruption, along with similarly big surges in US and Chinese inflation, and have served to push bond yields up from where they were at the beginning of this year Rising factory gate and commodity prices have merely served to reinforce these concerns, and there’s early evidence of having to pay higher prices, notably in air fares and other transport costs.

However, these appear to be merely a symptom of normalisation from the big falls a year ago, when the economy went into lockdown. Food prices more generally haven’t been showing any signs of upward pressure, which is probably the more important narrative. That’s not to say we won’t start to see sharp upward moves in headline CPI over the coming months. It started in PPI which has been trending higher since the end of last year when it was at 0.2%, and in April hit 9.9%. If this translates into a leading indicator for CPI, we could start to see a move towards 2% CPI in fairly short order. In April, headline CPI jumped to 1.5, from 0.7%, while core prices rose to 1.3%. If the US experience last week is any guide, we could see further rises in these numbers, towards the Bank of England mandated target of 2%, with headline CPI set to jump to 2.3%.

Thursday: The ASOS share price has traded sideways despite a decent first-half trading update in April. Having acquired the Topshop, Topman, Miss Selfridge and HIIT brands for £265m in February, fully funded from cash reserves, the company now has a host of other brands in its catalogue, while the integration costs came in lower than expected. In the first half, ASOS reported a rise in gross profit of 19% to £890m on revenue of £1.98bn. This has resulted in adjusted profit-before-tax rising by 275% to £112.9m, despite slightly higher costs of £15m due to Brexit, a number which was reported back in January. Part of the reason for the lack of upside could be down to the fact that most of its business is online, and with the UK economy on a reopening trajectory, more people are likely to be keen to go out and shop having spent much time indoors. This may affect trading for Q3, although management remained confident that despite the easing of restrictions, full-year forecasts were still in line with expectations.

Thursday: Earlier this year there was some surprise that China’s estimates for 2021 GDP growth were set at around 6%, with some arguing it was too optimistic and others saying it was too conservative, particularly since there has been little sign of a second wave. The jury remains out on how well the Chinese economy is actually doing, with retail sales showing some signs of gaining traction, although all of this year’s numbers have to be set in the context of an enormous skew, due to the shock of the pandemic lockdowns a year ago. While industrial production has managed to rebound easily over the past few months, consumer sentiment has been much more cautious

Thursday: The pound has spent the last few weeks treading water, with the rise in Delta variant cases seeing a little bit of a pause to the reopening process until July. This shouldn’t be reflected in the latest ILO unemployment figures for May which are expected to show the number of people on furlough continuing to reduce as the economy continues its reopening process. May's data look set to mark a slight rise to 4.8%. In April, the UK ILO unemployment slipped back to 4.7%, having been as high as 5.1% in December.

It remains clear that the government furlough scheme is continuing to disguise the underlying effects of the pandemic, which means the very real effects on the UK labour market won’t start to be seen until Q3 at the earliest, as the furlough scheme continues to wind down. For now, the outlook continues to remain positive, despite the one-month delay to a full reopening. The monthly jobless claims are also reflecting this improving trend, falling back to 6.2% in May, a sharp fall from 7.2% in March. This trend of lower claims may slow in June after the delay to reopening.

As we come into the middle of the summer, however, we do need to prepare for a move back higher as furlough measures start to unwind. A lot of jobs that were around over a year ago may still not come back, and the missing of the June deadline could be the final straw for some businesses. The Bank of England has already indicated that it expects unemployment to go higher, but not by as much as they thought in February when their projections were for a peak of 7.7%. This was adjusted lower at the last inflation report, to 5.2% for this year, and then down to 4.7% in the second quarter of 2022.

Friday: At the end of last month, Burberry CEO Marco Gobbetti announced he was stepping down after four years at the helm, and returning to Italy as CEO of Salvatore Ferragamo, based in Florence. Tasked with turning the business around back in May 2017, he appears to have largely succeeded although challenges still remain, with the share price only modestly higher from when he took over, over concerns as to who would replace him This is a real concern given the problems the company faced when Angela Ahrendts left, with shareholders perhaps fearing a similar outcome. When Burberry reported their full-year results in May, it was a mixed bag, largely due to the Covid-19 store closures. Full-year revenue came in at £2.34bn, with adjusted pre-tax profit of £365.7m, both above expectations, as China sales improved. There was disappointment over its guidance with respect to margins for the upcoming year, with management citing headwinds in the form of increased investment and expenses normalisation.

Friday: US retail sales have been fairly stop-start this year, with the significant amounts of fiscal stimulus helping to drive a rebound in consumption, but the recovery has been patchy, with significant numbers of US consumers choosing not to spend all of their stimulus windfalls. This is borne out by recent personal spending data which, apart from a couple of decent months, has been fairly muted. May retail sales declined -1.3%, a much bigger fall than expected, following a 0.9% rise in April. This year alone we’ve seen two negative months and three positive months, with the two strong positive months driven by the stimulus payments delivered in January and March. This appears to be a confidence thing for US consumers, and while we are seeing an improvement in the labour market, the lower-than-expected number of job gains in the monthly non-farm payrolls does raise questions as to what is going on in the US economy.

Home sales are weak and prices are rising across a range of products. Against this backdrop and with inflationary pressures rising, we could see another weak figure when June's data is published. While the US is doing well on vaccine rollout plans and the reopening of the economy, with theme and holiday parks also reopening, there still seems to be an overriding feeling of caution around consumer spending patterns, which appears to be tempering retail sales. Higher fuel prices probably aren’t helping either, with an expectation of a decline of -0.5% in June.

It’s US earnings season, and over the coming week there’ll be results announcements for a wealth of major businesses, as they update the market on their financial states of play. Over the coming week, US banks are in the spotlight, as they get set to reveal their numbers. There’s also an update from Coinbase, a company looking for a share price boost.

What will the announcements mean for the US banks’ share prices? Read our in-depth preview