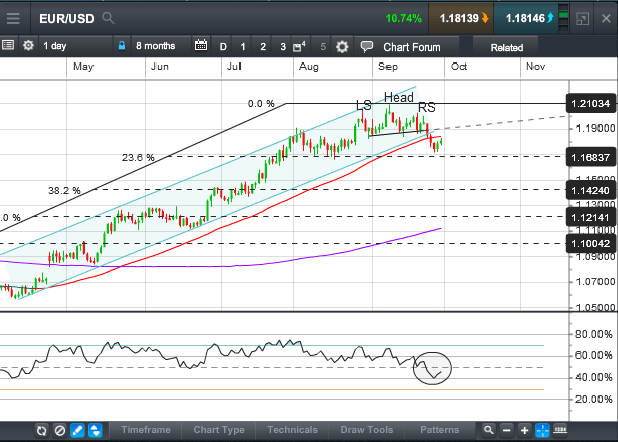 The big uptrend in EURUSD that had prevailed through much of 2017 now appears to be over following the completion of a head and shoulders top. In addition to weakening technicals, political uncertainty could impact trading in the single currency this week. Already reeling from the German election where Chancellor Merkel’s party had their worst showing in about 70 years, the Euro could find itself in the crosshairs of traders looking for a place to respond to a potentially volatile Oct  1st Catalonia independence vote in Spain.

Through most of 2017, EURUSD was under accumulation, steadily advancing in a rising channel of higher highs and higher lows. Over the course of the summer, however, this trend has ended and the Euro has started to turn back downward.

Upward momentum peaked in July, and while the pair continued to advance through August a growing negative divergence indicated upward momentum was slowing. Through late August and early September, a bearish head and shoulders top formed with a bearish gravestone doji at the peak.

In the last few days, EURUSD has turned decisively downward. The pair broke channel support and completed a head and shoulders top by falling below $1.1900 and it has continued to decline, taking out its 50-day average as well. The downturn in momentum has been confirmed by the RSI breaking down below 50.

The pair has found initial support near $1.1685 but an initial bounce attempt has been contained by the 50-day average near $1.1845 a lower high and the RSI remains below 50. This action confirms the recent breakdown and suggests the recent rally may be a trading bounce within an emerging downtrend. It would take a rally up through $1.1900 to call off the recent breakdown.

The Euro’s advance appeared to be driven by a number of factors including an improving Eurozone economy, a sinking US Dollar and anticipation that the ECB would continue to curtail its QE program.

Recent trading, however, suggests that political factors remain a key driver in EUR trading. The advances through the first part of the year came as Eurosceptic forces in the Netherlands and France were defeated and traders were expecting a runaway win for German Chancellor Merkel would increase Eurozone political stability.

Instead, it appears that the Pandora’s box of political instability may have been reopened. It’s not a coincidence that EURUSD’s big breakdown came the morning after German Chancellor Merkel’s party won but had its worst showing since the late 1940s. At the same time, the Euroskeptic Alternative for Germany party did a lot better than expected, scoring 12% of the vote. This indicates that opponents of the status quo ay have suffered a setback earlier this year but were not defeated. This could be particularly significant as Italy’s Euroskeptic Five Star movement announced their PM candidate for next year’s election.

The German results have also forced traders to pay more attention to the Catalonia independence referendum scheduled to October 1st. Spain’s federal government has been trying to cancel the vote attempting to close polling stations and trying to arrest regional leaders. It’s unclear if the vote will be held or not but any results are likely to be challenged by the losing side. This has created a potentially volatile situation increasing the risk of political unrest in Spain to start the new trading week. Since the IBEX doesn’t reopen until 2:00 am EDT Monday, Euro pairs could be the first place traders look to trade weekend developments.

CMC Markets Canada Inc. is a member of the Investment Industry Regulatory Organization of Canada and Member-Canadian Investor Protection Fund / Membre-Fonds canadien de protection des épargnants. CFDs are distributed in Canada by CMC Markets Canada Inc. dealer and agent of CMC Markets UK plc. Trading CFDs and FX involves a high degree of risk and investors should be prepared for the risk of losing their entire investment and losing further amounts. CMC Markets is an execution only dealer and does not provide investment advice or recommendations regarding the purchase or sale of any securities.

CFD and FX trading with CMC Markets is only available in jurisdictions in which CMC is registered or exempt from registration, and in Alberta is available to Accredited Investors only. CMC Markets neither solicits nor accepts business or accounts from residents of the United States of America.