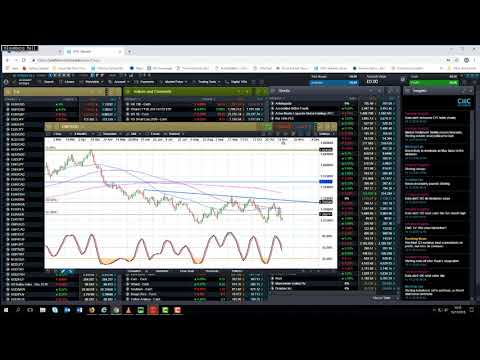 Watch our week ahead video preview (above), read our top eight stories to look out for this week (19-23 November), and view our key company earnings schedule.

Chief Market Analyst Michael Hewson looks looks at recent events surrounding the Brexit withdrawal deal, the outlook for sterling given current political instability, as well as looking ahead to the UK inflation report hearings, US retail stocks and Black Friday.

Brexit
Given the events of last week it's not inconceivable that we might get a leadership challenge or confidence vote on the future of Conservative party leader and Prime Minister Theresa May. If this were to happen it's likely we could get a brief sell-off, however calling a vote is one thing, but is the appetite there to unseat the Prime Minister and who would take her place? Any new incumbent would be likely to face the same unpalatable choices that Mrs May currently faces, unless there was some way of resurrecting previous ruled-out options like EFTA.

EasyJet full-year results
Tuesday: Will the long, hot summer, air-traffic-control strikes and a decent England World Cup performance act as a handbrake on profit? All this at a time when airline margins are under significant pressure, prompting profit warnings from the likes of Thomas Cook, FlyBe and Ryanair in recent months. These concerns, along with a rise in oil prices this summer, have seen easyJet’s share price fall over 30% from its summer peaks, despite the company stating that it remained on course to meet its full-year profit target of £550m-£590m. A large chunk of the revenue has been down to ancillaries such as checked bags and assigned seating. Items to keep an eye on include provision for disruption costs, which came in £25m higher than the corresponding quarter for the previous year.

UK inflation report hearings TSC
Tuesday: Having left interest rates unchanged earlier this month, Bank of England governor Mark Carney will be appearing before the Treasury Select Committee to talk MP’s through how the central bank views the performance of the UK economy. As the deadline for Brexit negotiations looms, the bank downgraded its outlook for the UK economy in Q4 to 0.3%, while remaining confident that Q3 would come in at 0.6%. Early data does appear to support this view, and while recent economic data isn’t indicative of an economy on the back foot, falls in business investment are a concern. This would suggest that businesses are holding fire on future spending and investment until the details of any deal become clearer.

CYBG full-year results
Tuesday: During the summer Virgin Money announced a 10% rise in profit to £141.6m, ahead of its merger with CYBG, with net income up 5.1%. This outperformance is in contrast to the most recent numbers from CYBG, which saw the bank post losses of £95m in May after setting aside £350m for PPI provision. Despite these numbers, the underlying business reported a 28% rise in profit in the first six months of the year. The merger (which was finalised last month) means that the new bank now offers a full suite of customer products, from current accounts to credit cards, mortgages, savings and ISAs. Shareholders should get a clearer picture of how the migration process is likely to play out, as the group aims to minimise the impact on clients and avoid the pratfalls that befell the recent TSB IT upgrades. The share price performance has been abysmal since August, so investors will be hoping for a positive trading update given the shares are just above two-year lows.

Best Buy & Target Q3 results
Tuesday: While most of this year’s headlines have been about US retail failures, we’ve also seen some success stories. US electrical retail giant Best Buy realised that consumer shopping habits were changing, and cut its UK losses early on, while restructuring its US business in 2014. It launched a ‘Renew Blue’ strategy focusing on customer experience, as well as closing non-profitable areas of the business. It also focused on quality and partnerships, and the success of its turnaround plan has raised speculation that it might be targeted by Amazon as a vehicle for expanding its own consumer profile. Expectations are for a Q3 profit of $0.85 a share, above guidance at $0.82. Target is another well-known US brand that accepted it needed to revamp its business mode by competing at the lower end of the retail landscape. While it has been helped by a resilient US economy, the numbers so far this year have reflected the turnaround, with its best sales growth in over a decade and digital sales up 41%. Expectations here are also for a beat of $1.12c a share, above company guidance of $1.10c.

Babcock International half-year results
Wednesday: Shareholders in Babcock will be hoping for a rare dose of good news this week when the company announces its first-half numbers. Despite posting a record profit in May, the shares have come under pressure over concerns about some of its government contracts, particularly with the MoD, where there is a £20bn funding gap. These concerns from ongoing government contracts have overshadowed everything else, despite revenue of over £5.3bn in its last set of full-year accounts. In July Babcock was more cautious, saying that revenue might be affected due to a restructuring of its UK defence division. While the company reassured that the business remained on track to meet its full-year guidance, this week’s numbers could cause further shareholder angst, at a time when some of its management processes have been called into question by an anonymous firm of researchers called ‘Boatman Capital’.

Sears Q3 results
Wednesday: This week’s latest numbers aren’t likely to make good reading given Sears filed for bankruptcy protection last month. The business currently has over 700 stores and debts of over $5bn. This week’s Black Friday might offer some relief, however the prospects for its 70,000 employees look bleak, unless it can organise a restructuring plan that keeps the most profitable ones open.

Germany and France flash manufacturing  services PMIs (November)
Friday: Last month the German government downgraded its growth forecasts for the economy, given concerns that escalating trade tensions could impact key areas of the German export machine. The latest PMI numbers for both manufacturing and services would appear to suggest this, with October manufacturing falling to a new two-year low. France’s numbers have also been similarly weak, as a slowing global economy affects output, though services have started to show signs of a possible turnaround. With Germany remaining soft however, this may simply be a false positive. This week’s flash numbers could reinforce the bearish sentiment that has seen the euro slide to its lowest levels this year against the US dollar.

Canada CPI & retail sales (October)
Friday: Having raised rates in October, the Bank of Canada has remained upbeat about the Canadian economy, with the unemployment rate recently falling to 5.8%. However, the number of jobs added was below expectations, coming in at 11,200. What was more disappointing was that wages growth showed little sign of picking up, and this weakness could feed into the inflation numbers for October and retail sales numbers for September. Retail sales have struggled since the summer, probably hindered by a high inflation rate and weak currency. The decline in oil prices in the past few weeks could go some way to helping with a fall in inflation, as well as a rise in retail sales, as we head towards the Christmas period.

US retail: Black Friday & Thanksgiving
Friday: The US retail sector hasn’t been without its problems this year, replicating those we’ve seen in the UK as high street stores struggle with the growth of online shopping. Shopping malls in the US have experienced similar problems, with big US retail names struggling to keep up with changing consumer shopping habits. From the collapse of Toys R Us to the bankruptcy of Sears last month, Black Friday is likely to make or break the year for many US retailers. Already this year store closures have been a feature of well-known brands like JC Penney, Macy’s, Walgreen, Gap and Sears.