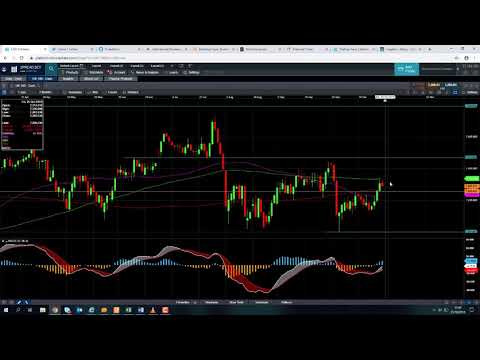 Watch our week ahead video preview, read our pick of the top stories to look out for this week (28 October-1 November), and view our key company earnings schedule.

In this week's video, market analyst David Madden discusses the potential affect on the markets with the latest on Brexit and the possibility of a general election in the UK, the US-China trade dispute, and upcoming central bank meetings.

Brexit agreement and/or extension?
It looks likely that the EU will offer an extension in line with the Benn act, which means it will last for three months, until 20 January, but with an option to terminate early if the withdrawal agreement gets passed through parliament. The French government would prefer a shorter extension, and the EU will meet on Monday to discuss it. Prime Minister Johnson has called for a general election on 12 December, but Jeremy Corbyn has said he will only support an election if Mr Johnson rules out a no-deal Brexit. Boris Johnson will need the support of two thirds of MPs to press ahead with a general election, but given the breakdown in the House of Commons, that could be difficult to achieve. Anything later than Mr Johnson's proposed date and we’re looking at next year, which raises the prospect of another Brexit extension if we get another split parliament.

HSBC Q3 results
Monday: The departure of CEO John Flint in the last quarter has inevitably sharpened investor focus on HSBC’s head count, as well as overall strategy when it comes to streamlining the bank. The news was a surprise coming as it did against a set of H1 results that showed the bank made a pre-tax profit of $12.4bn, a 16% rise on the year. New interim CEO Noel Quinn already seems keen to make his mark, announcing the loss of 10,000 jobs worldwide in a savage cost-cutting exercise, with the investment bank and Europe likely to be in the firing line for most of the cuts. This week’s Q3 numbers could bring these areas into sharper focus, especially especially those underperforming.

BP Q3 results
Tuesday: Having seen its profit more than double in Q1, expectations were high that this progress would be built on in Q2. The company didn’t disappoint, as increased production returns led to a 4% rise, helping drive profit up to $2.81bn and pushing first-half profit up to $5.1bn. Since then oil prices have fallen from the levels reached in the second quarter, which might suggest some pressure on margins for the Q3 numbers. With Bob Dudley on his way out, new CEO Bernard Looney will have to oversee the challenges of potentially lower oil prices, as well as the ongoing transition to renewables, at a time when debt levels still remain uncomfortably high. Management has already started to take steps to address that with the sale of its Alaska business to Hilcorp for $5.6bn, and this is a welcome start for a company whose gearing was just above 30% at its last update.

Bank of Canada rate meeting
Wednesday: In some respects, the Bank of Canada probably wishes its meeting was after the US Federal Reserve’s, which is later in the day, so that if it needs to react to another US rate cut it can reserve the right to do so. Unfortunately for the BoC though, its meeting is four hours earlier, which means it will be meeting blind.  However, the Canadian economy seems to be performing quite well, so there is minimal risk in waiting to see what the Fed does this month and reacting at its next meeting.

US Q3 GDP & FOMC rate meeting
Wednesday: Will the Federal Reserve go for three in a row? Having cut rates in July and September, and with significant splits over the September cut, markets’ pricing for an October rate-cut has moved to over 80%, after being below 50% at the beginning of the month. A large part of this change has been as a result of weaker-than-expected manufacturing and consumer spending numbers, which has prompted some shifting on tone from some Fed members. With the latest Q3 GDP data out only a few hours before, a weak advance number could prompt more Fed policymakers to move to the dovish camp and decide another rate cut is warranted. It seems unlikely that the two hawks, Kansas City Fed president Esther George, and Boston Fed’s Eric Rosengren will resile from their stance which means we could see yet another split if the Fed does move. We should also be prepared for a surprise with a wait-and-see approach, no change in rates and some dovish guidance.

Apple Q4 results
Wednesday: Apple shares have continued to go from strength to strength this quarter, with new record highs and a $1tr valuation, despite some underperformance in sales for its latest iPhones, in what generally tends to be a weaker quarter ahead of the pre-Thanksgiving and Christmas period, where sales generally see an uplift. The launch of the iPhone 11 could prompt a bump in sales after a disappointing Q3, and this could see revenue beat expectations. Services in particular are also likely to be a key area for the business, with revenue growth here likely to be a key catalyst, as income from handset sales comes under pressure in the months ahead. This pressure on hardware sales also means that the success of new services like TV Plus is going to play an even more important part in the direction of the Apple share price in the weeks and months ahead.

Facebook Q3
Wednesday: At its last trading update, most of the headlines were taken up by a $5.1bn fine as well as announcements of antitrust investigations by the FTC and the Department of Justice. This didn’t stop the Facebook announcing revenue of $16.9bn in Q2, while its key user metrics saw growth in both daily and monthly numbers of 8% year-on-year. The social media giant was downbeat about expectations for Q3, citing concern about a weaker outlook due to a slowing economy, as well as new restrictions on advertisement targeting from changes to privacy regulations as a result of GDPR. Expectations are for profit of $1.90c a share.

Bank of Japan rate meeting
Thursday: We hear a lot about the Bank of Japan being ready to do more when it comes to boosting inflation expectations, and every month the inflation picture has remained the same: subdued. No changes are expected this month, but it’s hard to see what else the central bank can do given it also owns a good chunk of the Japanese equity market.

Lloyds Banking Group Q3 results
Thursday: At its last set of numbers, Lloyds Banking Group found itself on the wrong end of yet another PPI provision, this time of £500m, taking its total provision to £650m this year alone. This overshadowed a fairly decent performance in Q2, despite the spectre of Brexit acting as a deadweight around its share price. Profits were still just shy of £1.3bn, despite the hefty provision. With the bank reporting decent numbers in both Q1 and Q2, its third-quarter figures are unlikely to be any different, as PPI provisions remain a concern, with indications that we might see another provision of around £1.5bn, given the rush of claims that probably came ahead of the end of August deadline. Income growth slowed modestly in Q2, and this could spill over into Q3 as net interest margins remain under pressure. The third quarter will also see the addition of the Tesco loan book, which will also show in its revenue numbers. We’ve seen a decent rally in the Lloyds share price in the last few days, as the short-term risks of a no-deal Brexit have diminished.

US employment report (Oct)
Friday: The September US jobs report had a little bit of everything for everyone, not least an unemployment rate that fell to a new multi-year low of 3.5%. This suggests that the US labour market remains solid, although puzzlingly, wages growth fell sharply, from 3.2% to 2.9%, while the headline non-farm payrolls number came in at 136,000. The dip in wages was a surprise and markets will be looking to see if it was a one-off or part of a weaker trend. Recent ISM data has shown employment starting to weaken, something that has been missing from the official figures. Could this be the month when non-fam payrolls growth goes sub 100,000?

Global Manufacturing PMIs (Oct)
If investors were hoping for a pickup in the September purchasing managers’ index (PMI) numbers, they got a rude awakening in September, with German manufacturing dropping to a new multi-year low. More worryingly, there was similar weakness across Europe as concerns grow that the malaise in the manufacturing sector could start to infect the services sector. Last week’s flash PMIs for France and Germany showed little signs of an uptick, which suggests that we’ll get more disappointing data this week.