The week ahead: US & Canada GDP; Topps Tiles, Marston’s results 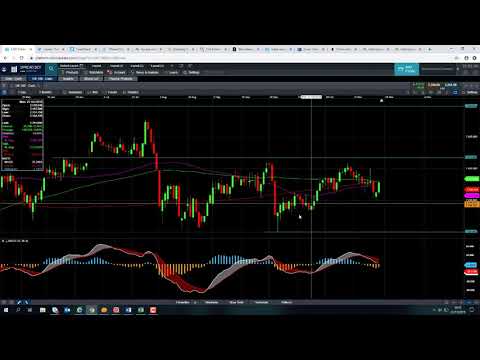 Watch our week ahead video preview, read our pick of the top stories to look out for this week (25-30 November), and view our key company earnings schedule.

Market analyst David Madden discusses the US-China trade situation and the Conservative party’s lead in the opinion polls, while taking a look at the major events of the week.

Monday: The US-China trade spat has taken its toll on the global economy. Manufacturing is inter-connected globally, so the ripple-out effect has hurt German industry, as borne out by the manufacturing purchasing manager’s index, which is close to a 10-year low. The previous IFO business climate reading came in at 94.6, slightly better than 94.3 in August, which was the lowest since late 2009. The German economy contracted in the second quarter, and in Q3 it grew 0.1% – narrowly avoiding a technical recession. It’s no secret that President Trump wants to “make America great again”, which is why he rearranged trading relationships with Canada and Mexico. President Trump has sent a few warning shots to the EU, but has yet to make a decision regarding tariffs. Business confidence in Europe’s largest economy is already in short supply, so any change in US tactics could be a turning point for Germany.

Tuesday: In May, Topps Tiles announced an 18.8% fall in its first-half profit before tax. Group revenue slipped by 0.2%, though like-for-like sales did increase by 1.2%. Ahead of its annual results, the company has said its commercial business is growing ”rapidly”, and sales in the six-month period have more than tripled on a yearly basis. Topps Tiles’ stores are commonplace around the UK, but the business’s focus has been towards the retailer end of the spectrum, so advances in the wholesale business is encouraging. Like many companies connected to the property sector, Topps Tiles claims that trading remains “challenging”, as UK house prices are growing at a slower rate, and in some pockets of the country, they’re falling. The political uncertainty surrounding Brexit is also likely to weigh on consumer behaviour. Worryingly, the UK construction PMI report shows that the sector has been enduring negative growth since May, which could spell trouble for the group’s commercial business.

Tuesday: Dick’s Sporting Goods’ stock recently hit its highest level in over two years, proving that sentiment is positive. Some traditional retailers have been finding trading tough, as a result of the rise of e-commerce. Dick’s posted solid second-quarter figures, with earnings per share (EPS) of $1.26, topping the $1.21 forecast. Same-store sales jumped by 3.2%, well ahead of the consensus estimate of 1.1%. In addition, the firm raised its full-year EPS forecast to $3.30-$3.45, from $3.20-$3.40 – with analysts expecting $3.31. The firm is gradually making the pivot to online trading, as e-commerce sales now account for 12% of total sales, up from 11%. In the last quarter, online purchases rose by 21%, so traders will expect the trend towards online trading to continue.

Wednesday: Marston’s record revenue and profit last year was assisted by the takeover of the Charles Wells Beer group; so the numbers weren’t as good as the headlines suggested. The stock took a hit in May when the group revealed sales figures that undershot market expectations. Marston’s said it was on track to achieve its debt targets, and was contemplating allocating funds into organic growth plans, rather than a new-build scheme – which indicates it is cautious about aggressive expansion. Last month’s year-end trading update included a profit warning, due to poor food sales. Like-for-like sales for its food-led pubs grew by a disappointing 0.1%, as the company cited tough competition, as well as a fragile consumer environment. Marston’s also announced plans to raise £70m by selling off pubs as a reaction to the subdued market, with the pub trade under pressure since the credit crisis. Although younger people are drinking less, some consumers are happy to pay more for higher quality food and drink, which means middle-of-the-road groups like Marston’s are feeling the pinch.

Wednesday: The US economy grew by 2% in the second quarter, considerably slower growth than the 3.2% in the first three months. There have been some signs the economy has been cooling, so traders will be keen to find out how the economy fared in Q3, with a new round of tariffs initiated in September. In recent months, the ISM manufacturing reading has dropped to a 10-year low, while the ISM non-manufacturing reading has fallen to a three-year low. Both reports have slightly recovered since, but nonetheless, concerns about the health of the US economy persist. The latest core personal consumption expenditure reading (the Federal Reserve’s preferred measure of inflation) decreased to 1.7%, from 1.8%, drifting further from the US central bank’s 2% inflation target. The Fed has cut interest rates by 0.25% three times since June, and in its latest meeting expressed mild concern about the inflation rate. The last two rate cuts will take time to trickle down to the economy, and hopefully, will spark demand.

Friday: Demand in the eurozone has been dwindling for over a year, a large factor in why the European Central Bank (ECB) restarted quantitative easing, by purchasing €20bn worth of government bonds per month. The flash CPI update showed the headline rate dropped to 0.7%, its lowest reading since late 2016. Comparing this to the October 2018 reading of 2.3% shows how far the rate of inflation has fallen. The quantitative easing scheme, which was launched in 2015, helped drive economic growth, and it’s now clear the ECB stopped the programme too soon. Expectations in relation to growth, as well as inflation have been managed lower. This is partially because of the slowdown in China and global trade tensions. German manufacturing has come under pressure in recent months; the largest economy in the currency bloc narrowly avoided a recession, highlighting the problems in the region. The ECB wants to drive up inflation close to 2%, which seems a fair distance away, but it’s worth noting that subdued commodity prices are weighing on top-line inflation. Traders will be keeping an eye on the core CPI rate, as it’s viewed as a better gauge of underlying demand.

Friday: The Canadian economy is in good health, growing by 0.5% in the first quarter, before registering 3.7% growth in Q2. The CPI inflation rate reduced from 2.1% to 1.9%, while the core CPI rate held steady at 1.9%. The latest jobs report showed unemployment remained at 5.5%, but the employment change component showed a drop of 1,800 jobs – while the consensus estimate was for nearly 16,000 jobs to have been added. The Bank of Canada (BoC) has held interest rates on hold for over a year, which is impressive considering US rates have been cut three times since June. The BoC may consider laying down the groundwork for a cut as a way of keeping a lid on the Canadian dollar, so exports won’t feel the pinch. In recent months, the ECB has reduced the bank deposit rate further into negative territory, and we have seen rate cuts in Australia as well as New Zealand. A soft growth report from Canada could spark chatter of lower interest rates.

Saturday: The previous China manufacturing and non-manufacturing reports were disappointing: the former slipped to 49.3 from 49.8, while non-manufacturing dropped to 52.8 from 53.7. The manufacturing sector has been in contraction for six months, according to the Chinese government. In contrast the Caixin survey showed the sector grew, with the mixed data confusing traders. Looking at the bigger picture, the second-largest economy in the world has been slowing for several years, and the trade fight with the US isn’t helping matters. Beijing periodically introduces initiatives to help lift output, but in reality they are just putting the brakes on the rate of the slowdown. According to US trade negotiators, progress has been made in relation to the currency, and at the start of the month, the US dollar dropped back below the 7 mark against the Chinese yuan – a sign that Beijing is playing ball. There are rumours that the trade talks will lead to phase one of the trade deal being signed next month, but Trump’s unpredictability could halt such an outcome.