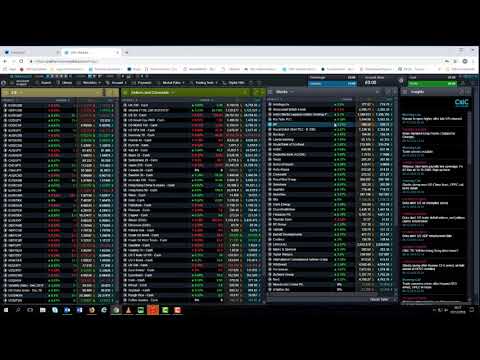 Watch our week ahead video preview (above), read our top eight stories to look out for this week (10-14 December), and view our key company earnings schedule.

Chief Market Analyst Michael Hewson looks back at this week’s stock market volatility, the outlook for the next few days, as well as looking ahead to next week's ECB rate meeting and the crucial parliamentary vote on the UK and EU withdrawal agreement.

UK vote on Brexit deal
Tuesday: It’s set to be another pivotal week for the pound as MPs gear up to potentially vote down Prime Minister May’s Brexit deal with the EU, in the process potentially triggering a constitutional crisis and throwing the government’s plans into turmoil. There still doesn’t seem to be a consensus view as to what might happen in the event of a rejection of the PM’s deal, but what can’t change at this point is the UK’s exit, which remains a hard date. It’s often claimed that there is a majority in parliament for a ‘no deal’ Brexit, and that may be true, but there isn’t a majority for any other type of deal and that’s the main problem. MPs are clear what they don’t like; but are also far from clear about what they do want.

UK wages & unemployment
Tuesday: With lower pricing pressure likely to be evidenced in November as a result of the recent fall in oil prices, this week’s wages data for the three months to October is expected to continue its recent upward trend. In last month’s numbers, average wages rose by 3.2% for the three months to September, the best level since the financial crisis. This trend is expected to continue as we head into year end, with consensus estimates for sustaining the current strong showing of 3.2%.

Superdry half-year results
Wednesday: The retail sector has had a tough year and Superdry has been no exception. Its shares have had an awful 2019, down 60% year-to-date to three-year lows. The downward spiral was accelerated in October after the company announced a profit warning due to the prolonged warm summer. This apparently prompted a slowdown in sales of its autumn and winter collections, causing the company to downgrade its profit expectations by £10m. The company also cited currency issues due to hedging, which weren’t able to offset exchange-rate fluctuations. For all of the negativity, revenue remain on course to rise from the previous year, although profit look set to be lower.

TUI Travel full-year results
Thursday: If Thomas Cook’s recent profit warnings are any sort of guide, we should be concerned about the latest annual numbers from sector peer TUI Travel. It also warned in August that profit would be lower due to consumers staying at home as a result of record high temperatures, a weak pound and the football World Cup, rather than enduring the chaos unfolding as a result of industrial unrest across Europe. Management did maintain its profit forecast for the current fiscal year, but it’s clear that investors remain sceptical as the shares sit at 17-month lows.

ECB rate meeting
Thursday: ECB president Mario Draghi has continued to insist that the European Central Bank will be ending its asset purchase programme at the end of this year, despite concerns that the European economy is showing increasing signs of distress. Weak manufacturing data from Europe’s three largest economies are the least of his problems, given that monetary policy remains extremely accommodative, with negative rates and reinvestments likely to continue. With markets increasingly fixated on when the ECB is likely to raise rates, it looks unlikely that previous guidance of a rise in Q4 next year is credible given the slowdown across Europe, as well as civil unrest in France, which appears to show that consumers are struggling. The ECB’s rate guidance may be adjusted to reflect the change in economic outlook across Europe and the rest of the world.

Costco Q1 results
Thursday: A number of US retailers have had a slightly better year than their UK counterparts, but the challenges they face are no different to those facing UK retailers. The difference is that they appear to have been more successful in dealing with the myriad of problems facing the sector, from disruptors like Amazon. Costco shares are not far from multi-year highs, and as such the wholesaler has proved itself to be one of those able to adapt to a changing retail environment, with net- and same-store sales both rising in its full-year results published in October. Expectations for the beginning of the new financial year are for Q1 profit to come in at $1.617 a share, a significant decline from the $2.36 at the end of Q4.

China industrial production & retail sales
Friday: There has been rising evidence of a slowdown in the Chinese economy over the past few months, with manufacturing showing signs of stagnation. Retail sales have also been sluggish, though we could see a pickup in November after a number of Chinese retailers, including Alibaba, reported a record spend on Singles Day. Improved retail sales would show that for all the pessimism, things may not be as bad as reported. However, it still wouldn’t remove all doubts, especially if Chinese authorities further ease monetary policy to cope with stresses elsewhere in the Chinese economy.

US retail sales
Friday: This week’s retail sales data for November should give us an early insight into US consumer spending patterns over the Thanksgiving holiday, in the lead-up to Black Friday. In terms of overall spend, the omens look positive: wage growth is at a multi-year high, while the slide in oil prices since October should have put more money in consumers’ pockets. It would therefore be surprising if we didn’t see a decent performance, which would suggest that the headline estimate of 0.2% is slightly on the low side.