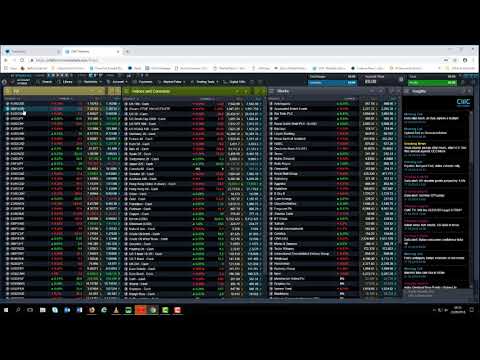 Watch our week ahead video preview (above), read our top eight stories to look out for this week (1-5 October), and view our key company earnings schedule.

Chief Market Analyst Michael Hewson looks ahead to the US and Canada September employment reports, the Aston Martin IPO, plus the key chart points for EUR/USD, US dollar index, AUD/USD and the German DAX.

Manufacturing & services PMIs (Sep)
Monday / Wednesday: It’s a big week for manufacturing and services in light of concerns about a slowdown in the global economy. Recent data has shown that manufacturing activity has fallen considerably from the beginning of the year. In France in particular, we’ve seen evidence of slowing economic activity, while the latest China purchasing managers’ index (PMI) readings have also been a little on the weak side. This week’s September numbers from Japan, France, Germany, Italy, Spain and the UK could reinforce these concerns, while the latest US data continues to get a lift from tax cuts that came into effect at the beginning of the year.

Reserve Bank of Australia rate decision
Tuesday: Last month the RBA left interest rates unchanged at 1.5% for the 25th month in a row, citing weak inflation and wages growth, despite further falls in the unemployment rate. Fears of a slowdown in China has weighed on some parts of the Australian economy, though Australian banks have announced increases to their own variable mortgage rates, which are due to kick in this month. Could the RBA react to the higher funding costs being felt by Australian banks, or will they hold firm as they have done for over two years now? With concerns about falling property prices and rising interbank rates, the RBA might be more dovish than normal, given that wages and inflation still seem fairly muted.

PepsiCo Q3 results
Tuesday: In July, PepsiCo’s Q2 profit came in ahead of estimates, helped by its Frito-Lay snacks subsidiary. Its drinks business, particularly in North America, has continued to struggle against its arch rival Coca-Cola, with revenue slipping on a combination of higher commodity prices and transport costs. In an attempt to diversify, the company announced in May it was buying baked fruit and vegetable company Baked Foods, to broaden its snacks business. In August it then went further and announced it was paying $3.2bn to acquire Sodastream, in an attempt to take the fight to Coca-Cola in the carbonated drinks market, as it looks to become more environmentally conscious. With governments cracking down on sugar and waste, the idea of producing concentrates and carbonation packs are a natural progression.

Tesco half-year results
Wednesday: Tesco boasted a 28% rise in annual profit in April, which helped propel the share price to its highest levels since 2014 in August this year, helped by a decent summer performance as the British consumer loaded up on food and drink items to cope with a blistering summer. Since then, the shares have dropped back in the wake of Tesco’s decision to open a separate front against the discounters of Aldi and Lidl. Its discount brand, Jack’s, will carry own-label versions of the type of staple food stuffs which has helped push Aldi and Lidl to the forefront of the UK high street. This strategy has raised concerns that Tesco might cannibalise its own business, shrinking its margins in the process. This week’s first-half update is likely to paint a positive picture for the year so far, but the outlook for the rest of the year may be less certain.

Aston Martin IPO
Wednesday: It has been suggested that Aston Martin is taking a risk in floating the shares against a backdrop of Brexit uncertainty, particularly since the Volvo IPO was only recently pulled; however Aston Martin is no ordinary IPO, and the cash is being reinvested into the business with a new plant to be opened in Wales next year. Will Aston Martin vanquish the doubters?

Ted Baker half-year results
Thursday: It may be doom and gloom in retail, but Ted Baker’s recent numbers have been fairly good, even if the share price performance hasn’t been. Online sales in Q1 helped drive business growth across the US and Europe, despite the cold winter weather. Its lower cost base along with fewer stores, strategically placed concessions and wholesale approach, has allowed it to keep costs down and maximise its margins, in the face of a competitive retail environment. This week’s first-half update could continue the theme of decent quarter-on-quarter sales growth, though the long hot summer could also have acted as a dampener on sales. This may explain why the company has embarked on a ’Love Ted‘ sale, with 30% reductions on some lines.

Canada unemployment rate
Friday: The last Canada jobs report showed a big drop in part-time jobs, of 92,000, with only a 40,000 rise in full-time employment. This was a big swing from the July report, which was more positive, and saw the Bank of Canada raise interest rates for the fourth time in two years. Friday’s September report needs to be a positive one to support the case for a further rate rise later this month, which markets are currently pricing in as quite likely, despite fairly average wage growth.

US non-farm payrolls
Friday: Last week’s decision by the US Federal Reserve to raise interest rates for the third time this year was no surprise, given last month’s jump in wages to 2.9%, matching the highest levels this year. This week’s September non-farm payrolls report is expected to continue the recent trend of a tightening US labour market, with another fall in the unemployment rate to 3.8%, while wage growth is expected to remain strong.