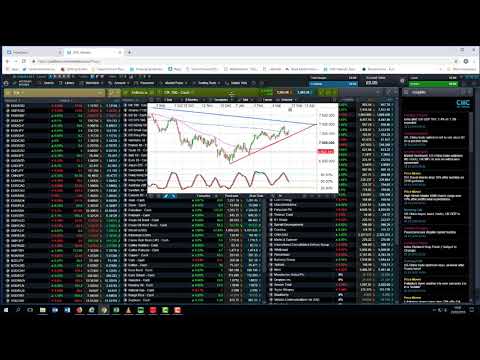 Watch our week ahead video preview (above), read our top eight stories to look out for this week (1-5 April), and view our key company earnings schedule.

Chief Market Analyst Michael Hewson looks ahead to the prospect of more Brexit votes, US and Canada payrolls and global PMIs, as well as looking at the key levels on the Nasdaq 100, FTSE 100, DAX, S&P 500, EUR/USD and GBP/USD.

More Brexit votes?
Monday (TBC): We could get further indicative votes regarding the various options on how to move the Brexit process forward, after the latest defeat for Theresa May's withdrawal agreement this week. Last week we had a number of indicative votes, where the two best losing options saw MPs vote narrowly against a customs union and confirmatory referendum. The prime minister’s vote might even come back for a fourth time, given it only lost by 58 votes, but that could be stretching it and she might step down in the interim. Even Lazarus only came back once, and while cats have nine lives, this deal is unlikely to pass without the DUP changing their minds. The choice is becoming ever more binary: no deal or revocation of article 50. Alternatively, the EU could offer an extension in the event of another referendum, or a general election.

Reserve Bank of Australia meeting
Tuesday: The slowdown in China appears to be having significant negative effects on the Australian economy, given last month’s unexpectedly dovish tilt from the Australian central bank. A slide in Sydney house prices, which have dropped over 13% from their recent peak, seems to be knocking consumer confidence. With Australian banks also tightening lending criteria, it’s becoming apparent that the so-called ‘lucky country’ is at risk of a significant slowdown. At present, the RBA has had a largely balanced approach to rate policy. However, any indication that they might lean towards a rate cut this year could see the Australian dollar decline further, with a move below 0.7000 potentially targeting further weakness.

Walgreens Q2 results
Tuesday: At the end of last year, Walgreens Boots announced plans to cut costs by $1bn over the next three years, after reporting numbers that beat estimates on revenue and profit. The share price, however,has struggled despite a strong rebound in US markets more generally. Concerns about shrinking margins and the possibility that Amazon will enter the market appear to have reinforced a reluctance on the part of investors to get back into the stock. The shares seem to have a solid base at $58, which has kept a floor under the price since October 2014. A fall below this level could precipitate further weakness if investors feel the company can’t meet its revenue and profit targets.

Global services PMIs (March)
Wednesday: The services side of the global economy appears to be performing better than other sectors. However, services tend to focus more on domestic trends, which means it can give a rather skewed picture when it comes to overall economic activity. Nonetheless, it seems that while economic activity is slowing, it isn’t collapsing, and that is surely welcome at a time when wages are starting to edge higher, as inflationary pressure is declining.

Saga full-year results
Thursday: It’s been a rocky road for Saga shares since their IPO in 2014, with the share price down over 35%. Its profits have suffered in the last two years, as both home and motor insurance revenue have struggled in a tough retail environment. A profit warning at the end of 2017 sent the shares sharply lower, and since then the shares have struggled to recover. While there are signs that the turnaround strategy is starting to work, progress has been slow. Away from insurance, the company is also focusing on travel, with two new cruise ships set to be delivered in the next 12 months. With an aging population, Saga should be one of those companies positioned to do well given its focus on an older demographic. It will only have itself to blame if it is unable to take advantage of this.

Constellation Brands Q4 results
Thursday: Constellation Brands, one of the world’s biggest international drinks companies and responsible for Corona beer, issued a warning at the beginning of this year after reporting a 38%  profit decline. It now expects annual profit to come in at between $9.20c and $9.30c a share. The company blamed higher costs as well as its recent investment in Canadian cannabis producer, Canopy Growth, for the downgrade. New CEO Bill Newlands may outline plans to cut some of the lower end of its wine portfolio given recent weakness in this area, and instead focus on higher value, higher margin sectors, as it looks to monetise its recent venture into the marijuana business.

US non-farm payrolls, unemployment & earnings (March)
Friday: In terms of the headline number, the February non-farm payrolls report was as bad as the January one was good. A gain of only 20,000 new jobs missed expectations by a large amount, especially when compared to the 311,000 figure in January. However, it’s hard to get an accurate gauge of how the US labour market is doing at a time when the US government may have impacted the monthly numbers. What we do know is the unemployment and under employment rates both fell sharply, while wages rose by 3.4% – the highest amount in 10 years. This would suggest that the US jobs market is tightening, with fewer workers available to fill open positions. A continuation of this trend in March is likely to prompt expectations that wages could rise further. This is to be welcomed, given incomes have been squeezed since the financial crisis.

Canada non-farm payrolls, unemployment & earnings (March)
Friday: The Canadian economy has looked to be stuck in the mud over the past few months, with muted economic (GDP) growth set against fairly weak consumer spending and lacklustre wage increases. The only upside has been the resilience of the labour market, which has remained fairly robust. The recent increases in interest rates have weighed on the housing market, knocking consumer confidence at a time when oil prices appear to have peaked. This week’s March payrolls are likely to show continued resilience when it comes to jobs; however, wages could remain anaemic. This means the Bank of Canada will probably keep rates on hold for some time, with suggestions that the next move could be a rate cut.