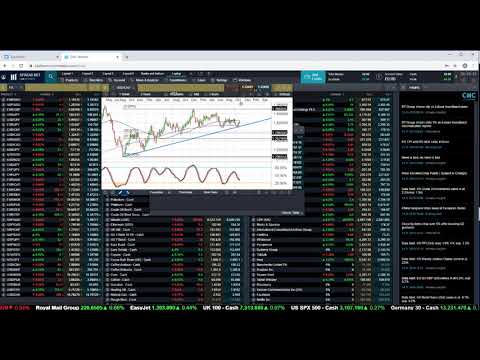 Watch our week ahead video preview, read our pick of the top stories to look out for this week (18-22 November), and view our key company earnings schedule.

Chief market analyst, Michael Hewson, reviews the week's price action, and looks ahead to minutes from the US Federal Reserve and European Central Bank, plus the latest flash manufacturing and services PMI data from Germany and France. He also previews the latest numbers from easyJet and Royal Mail.

Tuesday: In October, easyJet said it expect headline profit to come in between £420m and £430m, with passenger numbers growing by 8.6% to 96m. These expectations were driven by an increase in capacity to 105m seats. Despite this optimism, investors seemed unimpressed, as easyJet’s share price hit an air pocket and fell sharply. This proved to be a temporary aberration, as the shares quickly found support, rising up over 40% since the June lows. EasyJet has undoubtedly made gains due to increased demand as a result of the strikes at British Airways and Ryanair. Total revenue per seat rose by 0.8% in the second half, an outperformance from previous guidance, though for the full-year will still show a decline of 2.7%. In signs that overcapacity still remains an issue, the load factor fell to 91.5%. Although this might improve by year-end, it’s evident that the industry still has too many seats – particularly as more consumers opt to stay at home. Forward bookings are expected to meet expectations. Management is more optimistic about total revenue per seat improving into the end of the year, as the collapse of Thomas Cook has decreased downward pressure on margins, and in turn, improved passenger numbers. We could also hear whether easyJet intends to go down the package holiday route, having already paid £36m for Thomas Cook’s take-off and landing slots at Gatwick and Bristol airports. CEO Johan Lundgren was a previous employee of TUI Travel, and there is some speculation that he may look to point easyJet in the direction of the package holiday market. Whether this is a wise move is open to debate, as the collapse of Thomas Cook proves.

Tuesday: Rising consumer confidence and retail sales usually speak to a resilient retail market. However, US home sales have been one area of the US economy that has been lacklustre, largely due to higher mortgage rates. Home Depot shares have made decent improvements this year – up over 30% on expectations of good sales and earnings growth. In 2018, the company posted record sales of $108.2bn, which were helped by a housing market that has seen interest rates head higher for 18 months. This trend looks set to continue, though the company did warn that higher prices might weigh on the outlook, as a result of tariffs. In Q2, the company posted profit of $3.17 a share on revenue of $30.84bn, but warned that Q3 could be difficult, downgrading its same-store sales forecast from 5% to 4%. Q3 profit is expected to come in at $2.52 a share.

Wednesday & Friday: At the most recent payrolls report, the Canadian economy suffered a bit of a jolt as payrolls growth contracted. This unexpected setback has raised the prospect that the Bank of Canada might be tempted to cut interest rates at its next meeting. This week’s inflation and retail sales numbers could add some extra fuel to that fire of speculation. While it’s not always wise to place so much emphasis on the contents of one month’s payrolls data, more weak data this week could add to the recent weakness in the Canadian dollar. Inflation has fallen back in the last two months, while retail sales have also constricted. Further contractions in October could make the prospect of another Bank of Canada rate cut irresistible.

Wednesday: There wasn’t much in the way of a surprise when the Federal Reserve decided to cut interest rates for the third time this year. Most investors had been expecting such a move despite the likelihood of some dissent from Fed policymakers Esther George of the Kansas City Fed, and the Boston Fed’s Eric Rosengren. What was a little surprising was the indication that the Fed could be finished with further rate reductions in the short term. As well as the removal of the phrase that it would “act as appropriate to sustain the expansion” in his post-meeting press conference, Fed chair Jerome Powell went even further, saying that Fed officials saw that the current stance was likely to remain appropriate, in the absence of further deterioration in the data. The minutes should give further insight into the discussions behind this apparent change in tone. For the last three meetings, the hawkish dissents have largely been dismissed, however, it does appear that the two dissenters aren’t the only US policymakers uncomfortable with the recent easing. Atlanta Fed president Raphael Bostic was recently quoted as saying he would have also dissented to the most recent rate cut if he had a vote this year. This suggests that some Fed policymakers think they’ve done enough for now.

Wednesday: A useful bellwether of the US economy, Target is a handy guide to US consumer trends, especially at a time when US central bankers are looking for signs of weakness in this area. At the beginning of the year, the company managed to beat market expectations, and Q2 turned out to be even better, with the company raising its full-year outlook. Profit, sales and revenue all surpassed expectations. This was helped by strong growth in digital e-commerce, as profits for Q2 came in at $1.82, compared to $1.53 in the first quarter. Q3 generally tends to be the weaker quarter for retailers in general, as consumers gear up for Thanksgiving and Christmas, and as such, profit is expected to come in at $1.195 a share.

Thursday: It’s been a tough few months for William Hill, after recently announcing a raft of betting store closures across the country, and as the industry battles with downward pressure on margins. In the summer, the company reported plans to close 700 stores, dealing yet another blow to the beleaguered UK high street. Earlier this month, William Hill shares dropped sharply as MPs looked at further measures to crack down on the industry, this time in online gambling. Having reduced the maximum stake on fixed-odds betting terminals to £2, MPs now want to do the same for online casinos, with an outright ban on credit card betting, alongside a similar £2 maximum stake. This week’s quarterly update is likely to shine a light on the challenges facing the industry, as the company looks to recover from the £64m loss suffered in the first half of this year.

Thursday: The chickens appear to be coming home to roost for Royal Mail. Having dropped below its IPO price just over a year ago, investors appear to have finally woken up to the reality of management trying to reform a business that has a highly-unionised workforce – which was always going to be an uphill struggle. Not to mention the difficulties of having to support a letters division that is in decline, while market valuations of the business were always optimistic. Management hasn’t helped with its tone-deaf attempts to make staff realise that reform isn’t always a bad thing, particularly since companies like TNT, FedEx and UPS also operate in the same marketplace. In May, Royal Mail cut its dividend to free up £1.8bn over five years, as management deal with the problems of higher costs on its profit margins. Revenue has continued to grow; however, cost savings have been difficult to achieve, and with a potential pre-Christmas strike looming, all is not well at Royal Mail. This week we’ll discover whether or not Royal Mail is on course to meet its profit target of £300m-£340m, or whether further downgrades are in the pipeline.

Thursday: Mario Draghi’s last few meetings as ECB president appear to have been more fractious than normal, with policymakers breaking ranks to criticise the recent restarting of the asset purchase programme. At his last meeting before being replaced by Christine Lagarde, the outgoing ECB president reinforced the message that EU leaders needed to do more to complement ECB policy. There appears to be a growing caucus of ECB policymakers, particularly from the bigger economies, who are growing increasingly uncomfortable with the idea of unlimited quantitative easing (QE). This week’s minutes could offer further insight into those discussions, and whether Christine Lagarde will be any more successful in persuading central bank policymakers that even lower rates and more QE are a good thing.

Thursday: Earlier this month Gap announced that profit for the current year was likely to come in lower than expected, as well as announcing that CEO Art Peck would be stepping down. Gap cut its full-year forecast from $2.05-$2.15 to $1.70-$1.75 a share. It also projected that this week’s numbers would come in at about $0.35 a share – a sharp downgrade from the previous $0.55. The owner of Old Navy and Banana Republic has been struggling in recent months, as it attempts to adapt to changing retail trends. In May, the company announced the closure of 130 stores this year, as part of 230 it intends to close over the next two years. The company has also decided to divide the business in two, spinning off Old Navy, where the majority of its profitability is derived from, to focus on where it’s underperforming. It would appear that despite all of these changes, Gap still has some way to go before it can consider itself on the right path. This week’s numbers aren’t likely to be too illuminating, but they could offer clues as to whether the company is on the right track, and whether management is optimistic about Q4.

Friday: After a disappointing end to Q3 that saw German manufacturing numbers hit their lowest levels in over a decade – and even weaker levels than at the height of the European debt crisis – there is rising concern that the weakness in manufacturing is now starting to infect the services sector. There appears to have been a bit of a rebound in the October purchasing mangers’ indices (PMIs), but the recovery looks fragile. Concerns remain that the services sector is starting to feel the weakness from manufacturing. On the bright side, France is outperforming, but the picture remains uncertain.