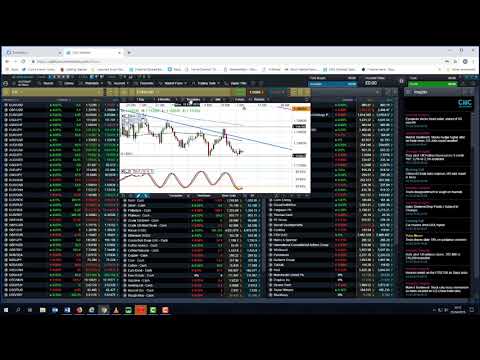 Watch our week ahead video preview (above), read our top eight stories to look out for this week (8-12 April), and view our key company earnings schedule.

Chief Market Analyst Michael Hewson looks ahead to next week’s ECB meeting, Fed minutes and the ongoing Brexit saga as yet another EU Summit gets under way. He also looks at the latest key levels on the DAX, S&P 500, GBP, euro and US dollar.

EU Summit & Brexit deadline
Wednesday & Friday: It's set to be another seminal week for the EU and UK as we approach another Brexit deadline. While it remains the legal default that the UK leaves the EU without a deal, the Prime Minister has already written to EU Council President Tusk requesting an extension to 30 June. She has more or less copy and pasted her previous request, which was rejected in favour of the 12 April deadline. Talks between the Labour party and the government are likely to continue under the pretence that they will try and agree a common position. It seems more likely that any extension will be a longer one and that the UK will have to put up candidates for the European elections. This is likely to be unpopular with Brexit supporters, however, the window for finding an agreement before 12 April is pretty much closed, which means that an extension is the most likely outcome. The alternative is 'no deal' with the EU throwing Ireland under the bus, and France won’t escape scot free either. President Macron already has problems of his own, and for all his tough talk, he would be unwise to exacerbate the tensions with the gilets jaunes in trying to make a political point.

ECB rate decision
Wednesday: At its most recent meeting the European Central Bank announced that it would be introducing a new TLTRO later this year, over concerns that both growth and inflation were likely to come in below expectations. Recent data would appear to suggest that this can’t come a moment too soon, with Germany and France in recession territory and core prices in the EU at 0.8%, just above a three-year low. The reality is the ECB is already at the limits of what it can do from a monetary policy point of view, which suggests that rates are likely to remain at current levels, or lower, for years to come.

Tesco – full-year results
Wednesday: It’s been a long road back but Tesco appears to be fending off the slow rise of Aldi and Lidl into its own market share of the food retail sector. It still remains by far the biggest player in UK food retail, and had a strong Christmas performance, beating its peers. That said, the company is continuing to review its cost base, with reports at the beginning of the year that it might look at cutting up to 15,000 jobs in its bakery and fresh food counters, as it looks to cut costs of £1.5bn. New accounting rules are likely to see profit come in lower, as rental charges on its leases are replaced by depreciation costs. Management confirmed these higher costs won’t impact cashflow.

Asos – half-year results
Wednesday: A surprise profit warning at the end of last year saw Asos shares plunge sharply, losing nearly 40%, with the company blaming the performance on weak November sales growth. The company had previously predicted full-year sales growth of 20-25%, which was downgraded to 15%. Profit margins were also sharply revised lower to 2% from 4%. Since that warning the shares have struggled to recover against a backdrop of weak consumer spending, and while the company posted a positive update last month, the pace of growth does appear to have slowed. Retail sales for the three months to the end of February rose by 11%, and while it looks set to meet its lower sales forecast from December, this could come at the expense of margins.

Fed minutes (March)
Wednesday: The biggest surprise to come out of last month’s Fed meeting wasn’t the fact that policymakers said they would be patient on future rate rises, it was the dovishness of the overall message, especially so soon after the central bank raised rates again at the end of last year. In the space of ten weeks we’ve gone from the prospect of three rate rises this year, to no rate rises at all, and for the balance sheet run off to end by September. The Fed also downgraded its growth forecasts for this year, and for those who were holding out for one more rate rise this year, those expectations have also gone. This would appear to shift the calculus as to when can we expect a possible rate cut. While the Fed may want to push back on such expectations, the reality is markets are already starting to price in the prospect. This makes this week’s minutes all the more instructive in the context of the tone of the debate, and how much consensus there was around the sharp turnaround in the central bank’s guidance.

China trade (March)
Friday: A rebound in the latest manufacturing PMIs has raised expectations that the Chinese economy might have hit bottom and started to rebound. In the February numbers, China trade deteriorated quite sharply – exports declined 20% and imports by 5.7%. It should be remembered that these numbers would have been skewed by the Lunar New Year holiday, which means that the March numbers could see a significant rebound, and in doing so introducing a skew the other way.

JP Morgan Chase – Q1 earnings
Friday: JP Morgan’s share price has been mediocre since its September peaks last year, though it has had a decent run since its December lows. Banks across the board are finding it difficult to maximise returns in the current low rate environment. Trading in the first three months of this year has proved to be even more difficult with inversion of the US yield curve, prompting the bank to review its staffing levels. With the bank missing profit estimates in its last quarter for the first time in 15 quarters, and given the recent announcement of job cuts in its asset and wealth management divisions, this week could be another disappointment. Profits are expected to come in at $2.37c a share, which seems optimistic when set against the $2.20c a share analysts were expecting in Q4, and which came in much lower at $1.98c.

Wells Fargo – Q1 earnings
Friday: Wells Fargo’s performance provides a good guide to how the US economy is performing given its sensitivity to the ebb and flow of both the economy and the housing market. This is one area which has struggled in the last 12 months with the bank still under Fed scrutiny for previous indiscretions. Its Q4 numbers were slightly better than expected, though this was mainly down to cost-cutting measures. Across the board revenues were lower, from mortgages, to business and consumer lending. Profits are expected to come in below Q4’s $1.21c a share at $1.10c a share.

Watch our week ahead video preview, read our pick of the top stories to look out for this week (7 - 11 December), and view our key company earnings schedule.