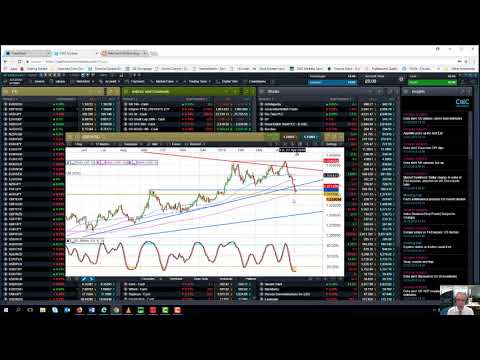 View his week ahead video, the top stories for this week, plus our key company earnings schedule. Michael looks ahead to the latest Bank of England rate decision and inflation report, as well as the key levels in GBP/USD. He also looks at the latest divergences between US and European stocks, and the China trade numbers.

Disney Q2 results
Tuesday: At its most recent trading update, Disney’s profit came in at the higher end of expectations, largely due to recent US tax law changes. What was more disappointing was the fall in overall revenue, with the greatest drag coming from its ESPN channels and ABC broadcast networks. Like a lot of other traditional broadcasters, Disney’s business is being disrupted by new streaming services from Netflix and Amazon, which are driving subscription costs down. Fortunately, its parks and resorts business is picking up the slack, while its bid for 21st Century Fox seems to have stalled following a new bid by Comcast for the Sky business, which Fox has a 39% stake in.

China trade (April)
Tuesday: We’ve seen a bit of a slowdown in economic activity in Q1, though some of that is likely to have been down to the disruption caused by Chinese New Year. The March numbers were a big surprise – China posted its first trade deficit with the US in over a year as exports fell back sharply, declining 2.7%, a big variance from the 44.5% rise seen in February. While the timing of Chinese New Year may cause some variance, these are big swings and do raise concerns that trade war worries, or a slowdown in global demand, might be affecting the numbers. The latest Chinese trade numbers will go some way to establishing whether these recent swings point to wider trade disruptions.

TUI Travel half-year results
Wednesday: In the past 12 months, TUI has been fairly successful in leveraging up its performance by growing its cruise and hotel business, with customers opting for the all-inclusive holiday option. Bookings in Greece, Turkey and Cyprus have proved to be popular, according to the company’s numbers from earlier this year. This had helped TUI pare its overall loss from the previous year, but trading conditions are likely to remain difficult given the slowdown in consumer spending across Europe and the UK over the past couple of months.

21st Century Fox Q3 results
Wednesday: The recent bid by Comcast for the remaining part of Sky not owned by 21st Century Fox has thrown a very large spanner in the works. The question of whether or not the company will eventually succumb to the recent approach by Disney appears to have thrown the company strategy, as it looks to focus more on sports and news while offloading the rest. Like most US companies there was a lift from the US tax cut in the previous quarter, but the business continues to struggle with higher costs. Sky continues to be a positive, but management need to decide whether to up their bid for the remainder of the Sky business to counter Comcast.

BT Group full-year results
Thursday: Last year BT Group signed a deal with Sky to share its content across their respective platforms. It could be argued that BT got the better side of that deal, but it also made sense with regards to the bidding for Premier League football rights, which could have sent prices ridiculously high. The deal to host Sky content helped fill a gap in BT’s package, but also helped both companies compete with Netflix and Amazon, as they look to hang on to their market share. At its most recent update BT reported a slowdown in its global services division, though its EE mobile division did show an increase in performance, while full-year guidance was left unchanged. Over the last month the share price has pulled away from five-year lows, in anticipation that the Sky deal has helped to retain clients for its TV services. Could the underperformance which has seen the share price more than halve since 2016 be coming to an end?