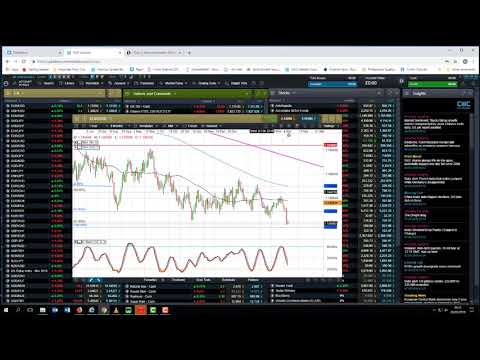 Watch our week ahead video preview (above), read our top nine stories to look out for this week (11-15 March), and view our key company earnings schedule.

Chief Market Analyst Michael Hewson looks ahead to the latest Brexit and UK economic developments in the coming week, as well as the latest US, UK and China data and the prospects for equity and forex markets going forward.

US retail sales (January)
Monday: After the horror show of December’s US retail sales, there is an expectation that we might see a sizeable adjustment. A lot of US retailers reported positive numbers in December, with both Amazon and Walmart announcing fairly strong activity. The January figures may have been impacted by the US government shutdown and activity could be somewhat subdued, but an upward revision from December is still expected.

UK GDP, industrial & manufacturing production (January)
Tuesday: The UK economy has shown signs of slowing in recent months, but hasn’t been unique in that regard, with global manufacturing displaying a sharp slowdown in the last six months. UK manufacturing PMI data has proved to be slightly more resilient, although some have attributed this to contingency stockpiling ahead of the UK’s planned departure date from the EU. Manufacturing and industrial production underwent steep declines in December, with little sign of a significant pickup, in contrast to recent PMI figures which have been slightly more robust. Monthly GDP declined 0.4% in December, but there are hopes it was just a one off, rather than signalling a broader slowdown into 2019.

US CPI (February)
Tuesday: US inflation has been fairly subdued in recent months, with the core consumer price index (CPI) remaining steady at 2.2% for the last three months. The more fluid number, which includes food and energy, dropped from 2.5% at the end of Q3 to 1.6% at the end of last year. This sharp fall has probably played a part in the recent change of tack by the US Federal Reserve, with the central bank pausing its rate-hiking cycle as US policymakers adopt a wait-and-see approach. February’s CPI data is likely to reinforce that caution.

Domino’s Pizza full-year results
Tuesday: The takeaway food business has had a significant amount of digital disruption in the last few years, as companies like Deliveroo and UberEats bring fast food to the masses. In its first-half update last summer, Domino’s profits were hit by rising costs as it looked to expand in Norway and Sweden. Sales growth in the UK and Ireland rose 8.1%, with the World Cup helping to boost sales. The big question for investors will be whether the company is getting on top of rising costs in its international market operations, which have helped drag the share price down close to four-year lows.

UK Spring Statement & Brexit vote
Wednesday: It’s set to be another important week for the UK economy as chancellor Philip Hammond unveils the Spring Statement, which is set to show an unexpected windfall for the UK economy. The amount of tax paid in terms of tax receipts has proved to be surprisingly strong, despite hysteria in some areas that leaving the EU would undermine the economy. It’s true that some business investment has dried up as we head towards the exit date at the end of the month, but the dark warnings in the run-up to the June 2016 referendum have not so far materialised. Given the extra fiscal headroom now available to the chancellor, this week’s latest Brexit vote is likely to shape how events play out in the context of an extension of article 50, which is looking increasingly likely regardless of whether or not a deal is agreed this week.

Williams Sonoma Q4 results
Wednesday: A decent bellwether of the US consumer, Williams Sonoma, which specialises in kitchenware and home furnishings, has had a strong run since its one-year lows at the end of last year. Q3 same-store sales rose 3.1%, while ecommerce revenue increased 8.2% to $747m. A miss on Q3 revenue saw the company downgrade its outlook for Q4, and the poor US retail sales number in December, as well as the US government shutdown in January, may show revenue struggling in Q4 as well. Revenue is expected to come in at $1.8bn, with EPS at $1.966. A lot will depend on business performance at its Pottery Barn and West Elm subsidiaries, in what is traditionally a good period for high-level retailers.

China retail sales & industrial production (February)
Thursday: With most of China closed during February for Chinese New Year, it will be difficult to draw too many conclusions from the latest set of data. However, in terms of services, the economy appears to be holding up fairly well, despite fears of a broader slowdown. Industrial production is likely to be subdued due to factory closures over Chinese New Year, though retail sales might see a pickup from increased consumer spending over the holiday period.

Cineworld full-year results
Thursday: When the UK cinema chain splurged $3.6bn on US based Regal Entertainment over a year ago, there was some speculation that it might have taken on too much, especially given the growing popularity of streaming services. When Cineworld reported its first-half numbers in August, they surprised to the upside, helped by films like Black Panther and latest Avengers instalment, which pushed profit up 164% to $160.2m and revenue to $1.86bn. The company said it was optimistic about the second half, with Mission Impossible – Fallout, as well as Mary Poppins Returns, expected to push up revenue. The company has also increased the number of screens by opening a host of new sites, which should add to the overall experience.

Restaurant Group full-year results
Friday: Restaurant Group surprised a few people last year when it paid £550m for rival food restaurant Wagamama, at a time when the sector is undergoing significant cost pressures in the form of rising wages and a more discerning consumer. The owner of Frankie and Benny’s is facing speculation that it may have bitten off more than it can chew. Investors have raised concerns about the sustainability of the dividend, which saw a cut in the wake of the purchase, while the sudden departure of CEO Andy McCue last month sent the shares dropping to levels last seen in 2010. Since October the shares have slid over 30%, and it looks increasingly likely that 2019 could be significantly more challenging. On the plus side, Restaurant Group outlets tend to be in the same areas as big cinema chains; so if cinemas do well, restaurants should feel some of the benefit. The big question is whether any uptick from Wagamama sales is enough to justify the price tag, while investors will also be hoping for an update on the search for a new CEO.