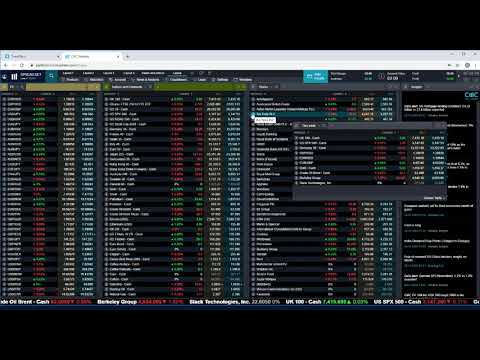 Watch our week ahead video preview, read our pick of the top stories to look out for this week (2-6 December), and view our key company earnings schedule.

Chief market analyst, Michael Hewson, looks back at this month's gains in equity markets, and whether we can expect more. He also looks ahead to the US non-farm payrolls, manufacturing and services PMIs, the Bank of Canada interest-rate decision, Opec meeting, and the next possible moves in the pound as we head towards UK polling day.

As we head into the penultimate week of the UK election campaign, markets are pondering the MLP YouGov poll and a potential 60+ majority for the Conservative party, but there is still a sense of nervousness that things could change this week. The biggest banana skin is the visit of US President Trump to the NATO summit which starts on 3 December. One of Labour’s key attack lines has been to drive fear about the future of the NHS, with respect to any US trade deal. Conservative HQ will be hoping that President Trump observes normal protocol and keeps his opinions to himself ahead of the 12 December poll date. You can be sure that certain sections of the media will be trying to tease out a reaction from the US president, which might invite further questions about the US/UK future relationship and help Labour's poor polling numbers in the process. Any narrowing of the polls in Labour’s favour could be to the detriment of the pound, which has made decent gains this week against the euro, hitting a six-month high in the process.

Monday: There’s been evidence of a pickup in manufacturing activity in the last couple of months, particularly in China and the US, while there have been improvements in Germany, albeit from very low levels. Whether it’s enough to suggest a longer-term improvement is another matter – after all, most dead cats bounce. While there is a degree of optimism that we may see a rebound into year-end, there is also some scepticism that it can be sustained into 2020.

Wednesday: While we’ve started to see evidence of a pickup in economic activity within the manufacturing sector, there is a concern that services is starting to feel some of the pain seen in manufacturing for most of 2019. The resilience of the service sector has been particularly notable so far this year, so it’s concerning, though not surprising, that we’re now starting to see a slight weakness.

Wednesday: This is likely to be a trickier decision for the Bank of Canada (BoC) than it would have been five weeks ago. Up until then, the Canadian economy had looked quite resilient, however recent payrolls data would appear to suggest a significant softening after an unexpected decline of 1,800, with markets expecting a gain of almost 15,000. The Canadian economy does tend to experience surprise drops in employment numbers, and there have been three other declines already this year, so we shouldn’t read too much into one number – though private ADP payrolls were also weaker. Nonetheless, this weakness could prompt the BoC to be more dovish than normal, if they don’t cut rates when they meet later this week.

Wednesday: It’s been almost six months since Slack listed on the US stock exchange, and the share price performance has been less than stellar. Priced initially at a premium to its $26 launch price, the shares surged to over $38, however since then, the shine has come off and the shares have slipped below $26 in October. The new-issues market has lost its glow in recent months, a trend that has been exacerbated by concerns over profitability and valuations that appear to stretch credibility. Valued at $20bn at the time of listing, Slack has yet to make a profit – losing $138.9m in its last fiscal year. Revenues have been growing, after the company posted an increase in sales of 58% to $145m in September. However, its operating expenses more than trebled to $478m, partly as a result of the listing. To prevent further downward pressure on the share price, markets will be looking for signs of increasing revenue growth, including evidence its costs are becoming under control. The company is still projected to post a loss of $0.08 a share for the quarter, and expected to post full-year revenues of between $600m and $610m for the year.

Thursday: When Jack Daniels-maker, Brown Forman, updated the market three months ago, it was clear that the numbers were likely to have been impacted by EU tariffs , in retaliation for US tariffs on EU goods. As a result, the company cut its forecasts for the current fiscal year by $0.10, with over half of the reduction being tariff-related. Underlying sales growth was still expected to be in the 6% to 7% range, nonetheless, the trend was clear, despite the US being its main market. Annual profits are now expected to come in between $1.65 to $1.75 a share. However, the slowdown in Europe and other markets could see this guidance come under threat again later this week, especially if Q2 profits come in shy of the market’s valuation of $0.52 a share.

Thursday: LVMH’s acquisition of Tiffany has seen the share price surge sharply in the last few weeks after the French company slipped a $16bn ring on the US jewellery specialist, giving the French luxury giant a big slice of the US market. This may be the catalyst that Tiffany needed to turn around its fortunes. The brand had been struggling in recent months, and in Q2 missed expectations on revenue, though profits did beat expectations. The problems in Hong Kong were acting as a drag on its business. The company has several stores there, while weaker demand in Asia wasn’ t helping. Its 93 US stores were also being squeezed by its cheaper rivals like Pandora. Expectations are for Q3 profits to come in at $0.85 a share.

Thursday: Kroger has been investing in new areas in order to take on the likes of Amazon and Walmart, while a deal with Ocado is expected to deliver results, once it’s beyond the transition phase. The company is set to spend over $3bn on revamping its stores this year, with a particular focus on digital sales. In November, the company forecast that it could see further improvements in profits and sales in the coming months. However, this turned out to be a little premature, after the company slowed down its renovation programme in response to a weak sales uplift outside of its core competency; which is the groceries business. Kroger’s ambition to compete with Amazon and Walmart remains undimmed, however, management has realised that perhaps too much change, too quickly, can be counterproductive.

Thursday: Oil prices have remained in a fairly steady range over the last few months, with Brent crude prices fairly steady between $55 and $65 a barrel – apart from a brief spike above $70 after the drone attack on Saudi infrastructure in September. With the Aramco IPO set to launch sometime this month, it’s unlikely we’ll see any significant changes to output, given the concerns about global demand. However, the Saudi’s will be keen to keep a floor under prices, with the promise of future production cuts if prices fall too low.

Friday: For all the concerns about a slowdown in the London and south-east housing market this year, Berkeley’s share price has had a decent run higher, with the shares up over 25% year to date. Most of those gains have come since June, when it reported that profits were down over 20%. To mitigate this, the company has launched 11 new developments this year, with eight outside London, including places like Winchester, Birmingham, Sevenoaks, Fleet and other key commuter areas. Revenues remained solid, with a rise of 4.1% from the previous year. While the company was cautious on its 2020 forecast, it was nonetheless optimistic that its previous guidance for the new tax year would bear up, despite the continuing Brexit uncertainty. With shareholders expecting to get back at least £1.8bn in buybacks and dividends in the months ahead, it’s clear that the rise in the share price is probably more reflective of that than any confidence that Berkeley will be able to shrug off the same concerns that have been systematic of the wider housing sector in the last two years.

Friday: The low expectations around the October jobs report turned out a mixed blessing, as the better-than-expected 128,000 number, along with an upward revision in the September numbers, offset concerns about a fall in the wages data and a rise in the unemployment rate. The assumption that the General Motors strikes would see a sharp fall in the headline number proved to be wide of the mark. While the number was on the low side, it was well above the consensus of 90,000. November’s data should see a pickup in seasonal hiring, as well as the re-inclusion of the GM strike numbers, as the US economy prepares for Thanksgiving and the pre-Christmas period. Over the past few years, the last three months of each year has consistently seen decent job gains. This year is unlikely to be any different, with a strong number likely to keep the prospect of any further US rate cuts at bay until early next year.