The week ahead: US non-farm payrolls; Zoom, Salesforce results 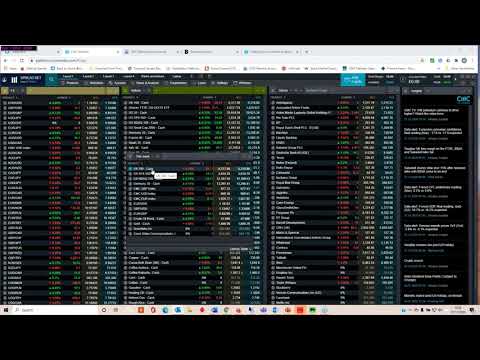 Watch our week ahead video preview, read our pick of the top stories to look out for this week (30 November-4 December), and view our key company earnings schedule.

Our chief market analyst, Michael Hewson, looks back at this week’s price action in equities and other markets, and ahead to the US non-farm payrolls numbers for November, as well as the latest global manufacturing and services data, against a backdrop of second-wave coronavirus restrictions. Michael also analyses key levels on the FTSE 100, DAX and S&P 500, plus gold, GBP, EUR and USD currency pairs.

Monday-Wednesday: It’s set to be an important week for UK data. Last week’s flash PMIs were slightly better than expected, in spite of the November lockdown coming to an end on 2 December. Manufacturing especially surprised strongly to the upside, with a rebound to 55.2, while services slipped back to 45.8, still slightly better than expected. Construction is also set to remain resilient given that sector also remained open during November.

The latest consumer credit and mortgage approvals numbers for October are also released this week. The mortgage approvals numbers have been particularly strong in recent months as homeowners strive to take advantage of the stamp duty changes which are due to expire at the end of March next year. This has prompted a surge in buying and selling interest, with approvals running at their best levels since October 2007, after hitting a record low in April.

Monday: Another recent IPO, Zoom’s share price has risen exponentially this year as a result of the pandemic. The company only came to market just over a year ago at $36 a share with a valuation of $9bn. The biggest concern at the time was the technology was easily replicable but unlike a lot of its IPO peers at the time Zoom is actually profitable, which automatically set it apart as a company worth watching. There was also the fact that a lot of its competition in the form of Webex, LogMeIn and Skype are still pretty mediocre, and had products which weren’t really core offerings. This still remains the case, however revenues have already more than doubled so far year to date and could well soar as high as $2.4bn for the current fiscal year.

Investors will have to judge for themselves whether that justifies a market cap of $125bn. Q1 revenues came in at $328m, before soaring even higher in Q2 to $663.5m, while profits rose to $186m. Unsurprisingly investor enthusiasm for the company has risen, sending the shares to within touching distance of $600 in October, before the shares slipped back to the current levels at around £440. There have been signs of growing pains in terms of its infrastructure, which may well need some investment to improve its resilience, after outages in August. In light of these gains, and the current valuation, there is a sense that while Zoom has done very well this year, questions need to be asked as to whether the company is worth over $120bn. For a start, Zoom’s success has prompted its competitors to up their game, so the fledgling company could find it has to work that much harder to stand still as time goes by. This could put the current valuation under slightly more scrutiny, among questions as to whether it’s sustainable at current levels. Q3 profits are expected to come in at $0.75c a share

Tuesday: The manufacturing sector has been much more resilient to the effects of the pandemic than the services sector in recent months. The most recent flash PMI numbers from the likes of Germany and France showed a big divergence, with France manufacturing weakening slightly to 49.1, while German manufacturing remained strong at 57.9, despite rising infection rates. Part of this outperformance in Germany is likely to be down to some inventory restocking, as well as improving demand in China, whose economy now appears to have recovered from its own lockdown malaise. There is a worry about future demand if further lockdown restrictions are implemented, as that could be a drag on economic activity as we head into 2021.

In China, manufacturing activity has already returned to levels last reached at the beginning of the year, and this looks set to continue, while the US has also been resilient. This week’s ISM reports are likely to act as a decent forward-looking indicator for Friday’s non-farm payrolls report. Pockets of weakness are still expected to be found in southern Europe, as well as Japan, however it is in the services sector that the real problems remain.

Tuesday: Salesforce appears to have benefited from the shift to working from home, despite being mostly geared towards office working. In August the company reported a big jump in Q2 earnings to $5.15bn, while earnings per share rose to $1.44c, well above the $0.67c estimates. As a result, the company revised its full-year revenue target up to $20.8bn, as well as revising up its profit estimates. The company cited its new Work.com product which helps clients in the transition to remote working as a reason for this success. Salesforce has also benefited from its elevation into the Dow, with shares hitting a record high in early September. Profits for the current quarter are expected to come in at $0.748c a share, which seems a bit on the low side given the outperformance in Q2. The company also announced last week it was in talks to buy Slack Technologies in an attempt to take on Microsoft which offers a similar tool with its Teams offering. A deal could well be announced in the coming days.

Tuesday: This week’s Q3 earnings numbers from Snowflake will be the first quarterly numbers as a publicly listed company, with the bar set high after shares more than doubled since it IPOd at $120 a share. In the first-half of this fiscal year, the company returned $242m in revenue, leaving it on course to more than double its turnover for this year, to over $500m.

The company’s new customer growth is quite something: at the end of last year, the company upped its client count from 948 to 2,392, and this year it has added 800 more, taking the total above 3,100. This will please its high-profile backers Salesforce and Warren Buffet’s Berkshire Hathaway, who both pledged to invest $250m in the business at a price equivalent to the final IPO price. Berkshire has also said it will invest a further $250m by way of a private purchase, also at the IPO price. However, be warned; the company is still not profitable. Expectations are for losses to come in a $0.26c a share, with some of that likely to be down to costs associated with its IPO.

Wednesday: This week’s services PMIs aren’t expected to make for comfortable reading, given the partial lockdowns implemented across large swathes of Europe. The most recent flash PMI numbers from France and Germany pointed to significant contractions in their November numbers, with France at 38. This weakness is likely to be replicated in the latest Spain and Italy numbers, and it is here that the biggest worries for EU leaders are set to increase. These have been in contraction territory since August and are likely to remain so for the fourth month in succession. In Italy the services sector has been only able to eke out a single month of positive output since March. Spain is only slightly better with positive months in June and July, however since then the slide in economic activity has been much worse than Italy, with a 41.4 reading in October, compared to 46.7 in Italy.

With the EU still arguing about their own fiscal stimulus pandemic plan, and trying to overcome the vetoes of Hungary and Poland it appears unlikely that the money so desperately needed by the likes of Italy and Spain will be available any time soon. This is likely to make the next few months even more painful for the most fragile economies in the euro area. As far as services activity goes, the outliers are expected to be China and the US, which are both expected to be positive. The UK is likely to miss out with a slide to 45.8, from 51.4 in October.

Thursday: It’s been a difficult few months for bus and train operators, given the sharp falls in passenger numbers since the March lockdowns were introduced. When Go-Ahead reported its full-year numbers for 2020 in September the company reported a small profit, with full-year revenues of £3.9bn. Rail operating profit fell to £8.9m largely down to losses in its German business and lower margins from its South Eastern franchise. The pandemic has continued to weigh on the business, with operating profit margins slipping back from 1% to 0.3%. In August the company agreed another eight-week funding package of £218.4m with the Department of Transport, for the provision of local bus services. An emergency recovery measure agreement was signed by GTR for the period until September 2021, for its Southern and Thameslink franchises.

Friday: One of the most encouraging things about the rebound in the US economy in recent months has been the slide in the unemployment rate, from its peak in April of 14.7%, to 6.9% in October. This trend is expected to continue in November with a further decline to 6.7%. Weekly jobless claims had until two weeks ago continued to decline, however they have now started to rise again from a low of 711,000 to 778,000 last week, amid concerns that the lack of fiscal stimulus is now starting to manifest itself in the form of a slowdown in the US economy. Another positive factor around the October numbers was a rise in the participation rate to 61.7%, which suggests more workers are returning to the jobs market. The participation rate is still below the 63.4% level it was in February, but at least it now appears to be heading back up again.

This is encouraging, however with Thanksgiving shutdowns rolling out across the US there is a risk that the rise in jobs growth could stall in the coming months, without the prospect of further fiscal stimulus from US politicians. Despite the resilience of the US labour market the fact remains that over 9m more Americans are still out of work compared to the beginning of the year. This week’s non-farm payrolls report is expected to add another 500,000 jobs to the 638,000 added in October, however the gains of the past six months still remain some way short of recouping the 21.5m jobs lost in March and April.