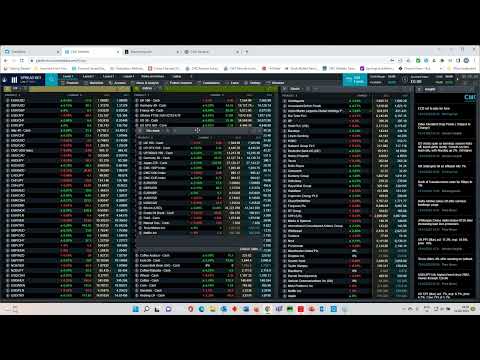 The Office for National Statistics’ retail sales figures for March will provide a fresh snapshot of the UK economy on Friday. UK inflation soared to a fresh 30-year high of 7% in March, according to data released by the ONS on Wednesday, which is likely to have led consumers to cut back on spending. In the corporate world, earnings updates are expected from Tesla, Netflix, Rio Tinto and more.

The Netflix share price has halved in value since reaching a high of $700.99 in November last year, as rising US interest rates have forced investors to be much more discerning about valuations.

Competition from the likes of Disney+, Amazon Prime and Apple TV+ is contributing to slower growth in Netflix’s subscriber numbers. Rising inflation is another brake on growth, with some consumers likely to be cutting back on streaming services. This means content is going to become even more important. Disney appears to be making strides in this area with the addition of the general entertainment brand Star to its platform.

In Q4 Netflix reported revenue of $7.71bn as profits beat expectations, coming in at $1.33 a share. The company added 8.28m new subscribers, falling short of its own estimate of 8.5m, although it was above Wall Street forecasts of 8.13m. At the end of 2021, Netflix had 221.8m subscribers.

Netflix’s estimates for Q1 were disappointing. On revenue the company said it expects to bring in $7.9bn, generating a profit of $2.86 a share. Both figures are below market forecasts of $8.12bn and $3.37 a share. On the user base, it said it expected to add 2.5m new subscribers, against an expectation of 6.26m. The company also lowered its operating margin forecast for the year down to 19-20%, and said it expects to become free cash flow positive this year, slightly later than it hoped.

International markets are likely to be key growth drivers this year, as they were in 2021 when 90% of new subscribers were outside the US and Canada. However, Netflix doesn’t appear to have given this issue a great deal of attention when it comes to hedging currency risk. In a letter to investors in January, Netflix said the stronger US dollar over the last six months of 2021 cost the business roughly $1bn in revenue, which it predicted would knock 2% off operating margins. The situation is likely to have worsened in Q1, given the gains that the US dollar has made so far this year. Netflix’s Q1 profits are expected to come in at $2.91 a share.

Tesla’s Q4 results, released in January, rounded off a record year for the electric car company, as annual profits reached $5.5bn. However, the automaker also warned of supply chain problems in the year ahead. That sent the shares lower – they bottomed out at an intraday low of $700 on 24 February. Since then, however, the stock has rebounded strongly, moving back above $1,000 in late March, though volatility remains a risk.

On 2 April the company announced that it delivered 310,048 vehicles in Q1, another record. However, the figure missed expectations, as supply chain disruptions hampered production. Profits for Q1 are expected to fall on a quarterly basis to $2.27 a share.

On the plus side, Tesla’s new plant in Germany opened in March, albeit later than scheduled. The factory should help Tesla boost output this year, but managers will have to contend with rising costs and ongoing chip shortages. Indeed, rising costs may have led to a drop in automotive margins during Q1 – this is likely to be a key area of interest for investors tuning into the upcoming earnings call.

The monthly decline in sales volumes in February was a surprise given that other retail sales measures appeared more resilient. According to the British Retail Consortium (BRC), retail sales climbed 6.7% in February. However, sales in March were impacted by weakening consumer confidence, which dropped to its lowest level since November 2020 amid soaring inflation and the cost of living squeeze. The latest BRC retail sales numbers for March showed that like-for-like sales declined 0.4%, indicating that consumers have started to cut back their spending.

Weaker investment revenue was a key concern for US banks towards the end of last year, and Bank of America was no exception. Its Q4 revenue from fixed income, currencies and commodities (FICC) came in at $1.57bn, missing forecasts of $1.76bn. Total Q4 revenue came in at $22.06bn, up 10% on the year-ago period, but below analysts’ consensus estimate. Profits came in at $0.82 a share beating consensus of $0.77 a share, driven by the release of $828m of loss reserves that the bank set aside at the height of the pandemic. Such releases were a recurring theme last year, swelling banks’ profits.

On cost increases, another area of concern, the bank was more upbeat. It said that while costs increased in 2021, they are expected to remain steady through 2022.

Since reporting its Q4 results in January, shares in Bank of America, one of the US’ largest retail banks, have fallen sharply, despite growth in US bond yields since the end of last year. Investor concerns over a slowdown in the US economy appear to be weighing on bank stocks. More specifically, there is concern that the increased cost of borrowing will not only weigh on house prices, but will also impact business lending and personal loan demand. The latest US consumer credit numbers appear to suggest that this isn’t a problem yet, though if inflation remains persistent we could see problems later in the year. Profits are expected to come in at $0.75 a share.

Germany’s closely watched measure of business sentiment – the Institute for Economic Research (IFO) business climate index – crashed to 90.8 in March, down from 98.5 in February. The March reading was the lowest since January 2021. The drop was caused by a combination of rising costs, Covid-related factory shutdowns, sanctions against the key export market of Russia, and strict lockdowns in China.

Economic activity in March was also hit by surging energy and producer prices, with the IFO claiming that business sentiment in Germany had collapsed. On the expectations index, the reading fell from 98.4 to 85.1, the biggest single-month fall since the onset of the pandemic in March 2020. Although the data paint a pessimistic picture of the German economy, the downturn in sentiment has not yet been reflected in Germany’s purchasing managers’ index (PMI).

The Anglo-Australian mining giant has been one of the FTSE 100’s better performers of late, climbing more than 20% so far this year. At the end of last year Rio Tinto posted record profits of just over $21bn, a 116% increase on 2020, and announced a huge total dividend of $10.40 a share, an 87% increase on the previous year. This comes as no surprise given the big rises we’ve seen in commodity prices over the last 12 months, with copper, iron ore and aluminium prices all surging on huge demand.

Looking ahead, management expressed uncertainty over the outlook for iron ore pricing, warning of higher production costs at its Pilbara operation. However, the outlook for aluminium and copper was said to be more positive due to their roles in the transition to renewables. The company is coming under shareholder pressure to cut greenhouse gas emissions after a number of investors expressed concerns about current levels at the recent AGM. In October last year the miner announced a $7.5bn plan to reduce emissions by 2030, but it was light on detail. Calls for a clearer roadmap are likely to intensify in the coming months.

Meanwhile, Rio Tinto has cut ties with businesses in Russia, and taken over the 20% stake in Queensland Alumina that was previously held by its Russian partner Rusal.

With the European Central Bank starting to taper its asset purchase programme, it is under pressure to outline a plan for raising interest rates as euro area inflation has hit new record high of 7.5%, based on preliminary estimates. This is a huge jump from 5.9% in February, underscoring the challenges facing Europe’s central bank. The producer price index (PPI) is also at record highs. While core eurozone CPI inflation, which strips out food and energy, is at a more modest 3%, this is of little comfort to EU citizens experiencing sharply higher prices. Companies are also struggling as they contend with the higher cost of doing business. Thursday’s announcement is expected to confirm that EU CPI inflation hit 7.5% in March.

Recent purchasing managers’ index (PMI) readings raise questions about their accuracy, given that manufacturing and industrial production numbers and other business surveys point to marked slowdowns in economic activity. In March Germany’s manufacturing PMI dropped to 56.9 from 58.4 in February, and France’s manufacturing PMI fell to 54.7 from 57.2 – still fairly decent numbers, as readings above 50 indicate expansion in the sector.

The positive readings may be because manufacturers are restocking inventory in order to get ahead of sharp price increases in April, with a similar pattern playing out in the services sector. Given further increases in energy prices, one wonders whether PMI readings will hold up as we move into Q2. The upcoming flash PMIs for April should give us a better understanding of how business sentiment is evolving.

Last year UK defence contractor Meggitt was in the news after the US firm Parker Hannifin made a £6.3bn bid for the business. Meggitt makes parts for civil and military aircraft, including the US F-35 fighter jet, with the US company’s move raising questions over foreign involvement in UK companies that are involved in work on UK national security, especially when the work is carried out in the UK.

The deal appears to have been held up by conversations within the UK government over assurances on keeping jobs in the UK. Historically, these types of pledges have proved to be largely worthless. While Meggitt shareholders may be in favour of the deal, there is also a chance it might be blocked by the Competition and Markets Authority (CMA), after the deal was referred by the business secretary Kwasi Kwarteng in October last year. The investigation was completed at the end of last month and the findings sent to the government, but we still don’t know what these findings are, even though the EU has given the green light to the Meggitt deal. Cobham’s proposed takeover of Ultra Electronics is also on Kwasi Kwarteng’s desk. Given Russia’s invasion of Ukraine, there is a chance that both deals could be nipped in the bud as the UK government, like many other governments, re-evaluates its national security.

In its most recent numbers Meggitt reported pre-tax profits of £31.3m, up from losses of £334m in 2020. Revenues fell to £1.49bn, with the company declining to offer guidance for the new financial year, in line with the provisions of the UK takeover code. Management said they expected the Parker Hannifin deal to complete by Q3 of this year.

In Q4 American Airlines reported a loss of $931m, mainly as a result of travel disruption caused by the Omicron variant. This pushed annual losses for 2021 to nearly $2bn. While this was still better than the $9bn posted in 2020, it underlines the challenges that have faced the travel and leisure sector during the pandemic. For Q1 the outlook was better, though total revenue was still expected to be over 20% lower than pre-pandemic levels.

Business travel which was a key revenue earner before the pandemic, has struggled to get anywhere near 2019 levels. Staff shortages have also been a problem. With peak travel periods stretching existing staff levels to breaking point, the airline is looking to rehire staff it let go during the pandemic. Losses are expected to come in at $2.46 a share.