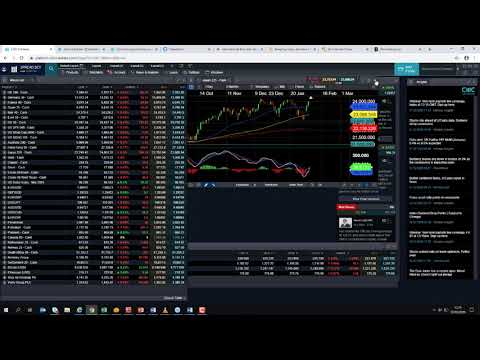 Watch our week ahead video preview, read our pick of the top stories to look out for this week (10-14 February), and view our key company earnings schedule.

In this week's video, UK market analyst David Madden previews the rebound in stocks in the wake of the Chinese authorities injecting liquidity into the markets, China’s plan to cut tariffs on US imports, and all the major events of the week ahead.

Monday: China’s consumer price index (CPI) rate of inflation has been on the rise for several years, and is currently at its highest level since 2012, which is odd, considering the producer price index (PPI) rate has been in decline for over two years. Traditionally, the PPI rate has been a leading indicator for CPI, because price changes at the factory level often feed into consumer prices. There might have been a divergence between PPI and CPI in recent years, but in the past few months the PPI rate has starting to turn around from its negative growth rate, and is now moving in the same direction as CPI. The high CPI inflation level might be down to robust domestic demand. The Beijing government are very aware that the economy is no longer growing at double-digit rates, so have introduced various measures to stimulate economic activity, such as relaxing bank lending policies.

Tuesday: The Bank of England (BoE) kept UK interest rates on hold last month, despite speculation of a cut. Political uncertainty arising from the general election and Brexit has taken its toll on the British economy, with manufacturing and construction weak, while the services sector is subdued. The BoE voted seven to two in order to keep rates on hold. For all the chatter about a possible cut, the vote didn’t come close in the end, though the BoE did lower its growth forecast for 2020 to 0.8%, from 1.2% in November. Last week, the final January manufacturing and services PMIs came in at 50.0 and 53.9 respectively. The readings are lacklustre, but still showed slight improvements on the previous month. After the pro-business Conservative party’s election win, next month’s Budget is likely to reveal policies aimed at stimulating the economy, so in the near-term sterling volatility could remain low.

Tuesday: Ocado posted a full-year loss of £44.4m last year, blaming partnership costs and higher levels of investment. Investing in the business is not a bad thing, and this was also reflected in this year’s first-half numbers. Revenue for the six-month period increased by 10.5% to £874m, retail revenue rose by 9.7%, and fees invoiced from solutions partners jumped by 36%. Ocado has spent years perfecting its skills as an online grocer, but for a while struggled to branch out from the UK. However, it can now boast partnerships in France, the US, Canada, Australia and Japan. Once it started to broker deals overseas, other companies started to sign up, and its success became a self-fulfilling prophecy. Ocado has marked itself out as specialist in the online grocery space, at a time when an increasing volume of shopping is conducted online. The group will need to keep adding new contracts to keep up with investors’ expectations.

Wednesday: It was an interesting 2019 for the Reserve Bank of New Zealand (RBNZ), after it revealed two interest-rate cuts, following over three years where rates were kept on hold. In May, the central bank lowered rates by 0.25%, and that was quickly followed by a 0.5% rate in August. The latter cut was larger than expected, catching some traders by surprise. Adrian Orr, the head of the central bank, said it was possible that rates could turn negative should circumstances require it. Rates have been kept on hold since August 2019 though, and markets are pricing in a high probability of no change. With its connection to China, the New Zealand economy has cooled in recent years, and US-China trade tensions are not helping. On an annualised basis, New Zealand’s economy grew by 2.3% in the third quarter of 2019,  a respectable level but still a considerable drop from the 3.3% growth in 2018. The unemployment rate in the final quarter of 2019 fell to 4%, which is impressive compared with the 5.2% rate three years ago. It would seem the aggressive rate cuts last year have trickled down to the economy. With the US Federal Reserve, as well as the Reserve Bank of Australia, appearing happy to keep rates on hold, the RBNZ is likely to follow suit.

Wednesday: Dunelm has performed well lately, having revealed two positive updates in the past two months. In December, it  announced that gross margins were better-than-expected on account of sourcing gains. The company also said that full-year profit would be higher than previously expected. Last month, Dunelm revealed that Q2 like-for-like sales increased by 5%, with profit in the first half expected to jump by roughly 20%, to £83m. The group has been performing well for a while, with solid full-year numbers in September. Pre-tax profit increased by more than 23% to £125.9m, which was at the higher end of its guidance. The final dividend was 20.5p, in addition to a special dividend of 32p. Given that many retailers have been finding trading tough recently, Dunelm’s robust performance is all the more impressive.

Thursday: Barclays posted solid third-quarter numbers in October, with pre-tax profit of £1.8bn, above the consensus estimate at £1.5bn. The bank outperformed on trading, as revenue from fixed income, currencies and commodities (FICC) increased by 19% –  good numbers by European standards. US banks have been largely doing well when it comes to FICC, though European banks have been underperforming in comparison. Barclays confirmed that it set aside £1.4bn for the mis-selling of PPI but there was a muted reaction to the news as the bank cautioned about a provision of roughly that size in September. The government-imposed deadline to claim for the mis-selling of PPI was the end of August, therefore we should have heard the last of PPI. The bank’s share price got a boost in December on the back of the Conservative's election victory. Traders took the view that the avoidance of a Labour government should remove some of the uncertainty surrounding investment in the country.

Thursday: Centrica has performed poorly in recent years. With society changing its attitude towards fossil fuels, the group has been moving away from oil and gas exploitation, and focusing more on providing energy services to customers. After Ofgem’s default tariff price cap came into effect at the start of 2019, Centrica (via its British Gas subsidiary), said it would take a one-off hit of £70m. In November, Centrica won its high-court battle with the regulator in relation to the price tariff. The group has been losing customers to more nimble energy providers, and has been going down the cost-cutting route, leading to a cut in its interim dividend of more than 50% to 1.5p. The group said the full-year dividend will be shaved down to 5p, undershooting the 6p forecast. A number of job cuts were announced last year, and further reductions are anticipated. In July, it was announced the CEO, Iain Conn, will step down in 2020. Seeing as the share price has tumbled roughly 70% during his time at the top, few shareholders will be sad to see him go. He was also awarded a 44% pay rise in 2019, despite a ”challenging year”.

Thursday & Friday: Both the US CPI and core CPI rates are currently 2.3%, so by these measures, demand in the US is robust. The Federal Reserve kept rates on hold last month. The Fed’s preferred measure of inflation is the core PCE rate, which is currently at 1.6%. The US central bank would like to drive up this rate closer to 2%. The US labour market is strong: the unemployment rate is at a 50-year low of 3.5%, and wages are growing at a rate of 2.9%. It would appear the US economy is nearing full employment, though there hasn’t been a corresponding jump in wages, so workers are likely to have a low propensity to spend money. Oil market volatility jumped in January, so the headline CPI rate might be skewed by erratic moves in the energy market.

Friday: The Royal Bank of Scotland (RBS) had a tough time in Q3 as it posted a pre-tax loss of £8m, nowhere near the £720m profit expected. RBS, like Barclays, took another writedown in relation to PPI, at £900m. The charge was part of the reason why the bank went into the red in the last quarter. NatWest Markets, a division of the group, said that trading was “challenging”. Income at the unit declined by over 70%, and losses on indemnity insurance were largely blamed on poor performance. Net interest margin is a closely watched lending metric, and it slipped to 1.97% from 2.02%. The low interest-rate environment is likely to continue for some time, as the Bank of England is unlikely to even consider hiking rates until the UK has left the transition period. RBS is primarily a retail bank, so it derives the lion’s share of its revenue from lending, a division that is likely to remain subdued for a while yet.

Friday: The eurozone economy continues to muddle along. The region has made great strides since the 2010-2013 era, when the sovereign debt crisis plagued the currency area, but it’s still lagging compared with the UK and US. The European Central Bank lowered the deposit rate to -0.5% from -0.4% as well as restarting a €20bn per month government bond-buying scheme. The decision to restart the stimulus package, was an admission that the first government bond-buying scheme had ended too early, though policymakers would never concede that. Eurozone manufacturing as a whole has been in contraction for a year, while the services sector has been experiencing only modest growth. Germany’s all-important manufacturing sector has also been in contraction for the bulk of the year, but it does appear to have bottomed out. Headline inflation in the eurozone recently ticked up to 1.4% from 1.3%, but at the same time, the core reading slipped to 1.1% from 1.3%. The core reading is usually deemed to be a better gauge, so it appears that underlying demand in the currency area is waning.