The week ahead: BoE & Fed rate decisions, FedEx & Next results 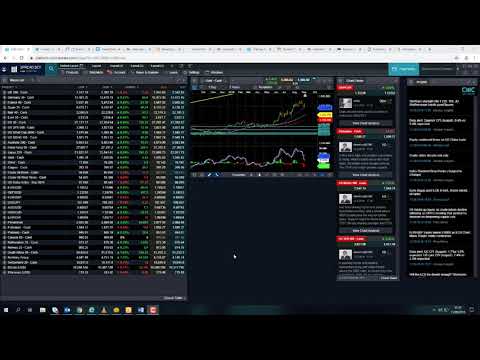 Watch our week ahead video preview, read our pick of the top stories to look out for this week (16-20 September), and view our key company earnings schedule.

Market analyst, David Madden, looks ahead to the ECB stimulus package, US-China trade relations, Brexit, and discusses the major events of next week.

China fixed-assets investment, industrial production and retail sales
Monday: China's economy has been cooling for a number of years, and from time to time the Chinese government embarks on initiatives to stimulate economic growth, but this simply slows down the rate of cooling. The recent deliberate devaluation of the yuan was a reaction to the US trade war, as the softer currency to a certain extent is offsetting the imposed tariffs. The People’s Bank of China also announced plans to cut the reserve requirement ratio by 50 basis points in September, October and November, and this is all aimed at trying to keep the economy growing at roughly 6.5% per year. Fixed-asset investment and retail sales have been in a strong downtrend for years, and the last industrial production report fell to a level not seen since the credit crisis. The weakening of the yuan should be good for domestic exports, but local retail sales might feel the pinch as imports are likely to cost more, and the middle income earners could be squeezed.

Brexit
Tuesday: The saga continues, and sterling rallied as traders believed the prospect of a no-deal brexit appears to have declined Speaker of the House of Commons John Bercow said he would use "creativity" to ensure Prime Minister Johnson doesn’t swerve legislation that was introduced to avoid a no-deal situation. A report was doing the rounds that the DUP were open to the possibility of some trade checks in the Irish Sea, but DUP politicians like Sammy Wilson denied such claims. At the start of the month the High Court declared the decision to suspend parliament as lawful. That has since been appealed, and the Supreme Court will announce its decision on 17 September.

FedEx Q1 results
Tuesday: FedEx posted respectable fourth-quarter figures in June. Adjusted EPS was $5.01, which topped the consensus of $4.85. Revenue for the period increased by 2.89% to $17.81bn and dealers were expecting $17.79bn. The group cautioned that the trade spat between the US and China is likely to impact its performance next year. In late August, the stock fell to a level not seen since June 2016, and that move coincided with the ratcheting up of trade tensions. As of early September, China started imposing new tariffs on US imports, and vice versa. Trade talks are due to take place next month, but the situation is still going to hang over the group. FedEx is seen as a gauge for US consumer demand, and given that the latest US retail sales showed robust 0.7% growth, it should be positive news for the parcel delivery courier.

UK CPI inflation (August)
Wednesday: There have been some positive economic updates lately among all the political headlines of recent weeks. The unemployment rate is at its joint-lowest level since the 1970s, and wages are growing at a fast rate too. The latest UK inflation report jumped to 2.1%, while economists were expecting it to fall to 1.9%, against the Bank of England’s inflation target of 2%. The core consumer price index (CPI) rate edged up to 1.9%, and that reading is often a better gauge of underlying demand. The last retail sales report was respectable, showing that people are still willing to spend money despite the political turmoil. The retail sector has been offering generous discounts to attract buyers, and there is an argument to be made that demand is robust due to these discounts. The recent sell-off in the pound is likely to push up headline inflation in the months to come, but the UK economy has overcome high inflation in recent years.

Eurozone final inflation data (August)
Wednesday: Economists are expecting the final reading of the eurozone’s CPI to be 1%, unchanged from the flash report. The core reading is often deemed to be a better gauge of underlying demand, and that report is expected to be 0.9%, also unchanged from the flash update. At the recent ECB meeting, the central bank lowered its inflation outlook for 2019, 2020, and 2021. The central bank also lowered the deposit rate to -0.5%, from -0.4%, and a stimulus package of €20 billion per month will start in November. Demand in the currency bloc is low, and it is predicted to get weaker, hence the loosening of monetary policy from the ECB. The final reading of German, French and Spanish CPI was 1%, 1.3% and 0.4% respectively, and when some of the largest countries in the region have subdued demand levels, it doesn’t bode well for the region.

Kingfisher half-year results
Wednesday: Kingfisher has been struggling in recent years as its operations in France, Russia and Romania have underperformed. While the B&Q business and Screwfix operation continue to perform well, last month the stock fell to its lowest level in over three years. In March, it was reported that Veronique Lauary will be stepping down as CEO to be replaced by Thierry Garnier, the former CEO of Carrefour China, in the autumn. The group has reaffirmed its commitment to achieve savings of £500m by the year 2021, but traders will be wondering if the new CEO plans to continue the cost-cutting scheme. Kingfisher plans to close 15 stores in the UK, and 19 sites in Germany. The group had a mixed performance in the first-quarter. The UK, Ireland, and Poland saw total sales increase by 5% and 7.4% respectively, while the French operation saw sales fall by 3.4%. There has been an economic cooling across Europe in the past year or two, and the uncertainty surrounding Brexit is a factor, as well as global trade tensions and the slowdown in the UK housing market.

US Federal Reserve meeting
Wednesday: At the start of the year there was talk of four interest-rate hikes, but that was met with fear the US were going to hike rates at too fast a pace, sending the economy into recession. The Fed has since cooled its language. The slowdown in China, and the US-China trade spat, have taken their toll on the global economy. There is continued talk about lower rates from the Fed, and the aggressive move lower in US government bond yields suggests that traders are expecting the Fed to cut rates. There have been some mixed reports out of the US recently, as the ISM manufacturing reading dropped to its lowest level since early 2016, while the core PCE reading held steady at 1.6%. The unemployment rate is 3.7%, close to a 50-year low, and yearly earnings are growing at 3.2%. This is much higher than the inflation rate, so a rate cut isn’t a done deal. Jerome Powell, the Fed chief, has come under intense pressure from President Trump recently. The central banker didn’t give much away at the Jackson Hole symposium, suggesting the Fed might hold fire as a way of asserting their independence.

Next half-year results
Thursday: The fashion house revealed solid first-quarter figures in May. Full-price sales jumped by 4.5%, which easily topped the 3.2% forecast. The retailer said the unusually warm weather over Easter helped the high street division. Despite the warm weather, overall high street sales still dropped by 3.6% in the first quarter, while online sales jumped in excess of 11%. This has been a common theme across the retail sector. Boohoo are an online-only fashion house, and recently their share price hit a record high. Next will need to ramp up its e-commerce division if it wants to compete with the likes of Boohoo. Last year the group posted a small decrease in profit, the third annual profit decline in a row. CEO Simon Wolfson said the company is prepared for a no-deal Brexit. He believes the reduction in tariffs on goods coming from non-EU countries should more than offset the tariffs on imports from EU members.

Bank of England meeting
Thursday: The Bank of England are tipped to keep interest rates on hold, and the stimulus package is also expected to remain unchanged – the UK central bank is likely to sit on its hands while the Brexit situation unfolds. The UK was due to leave the EU in March, but an extension was granted, and even though it avoided a no-deal Brexit, it left many in the business community in limbo. It is possible there might be another extension, and it is clear the lack of clarity is hurting businesses. The construction PMI reading showed the sector is in contraction, and manufacturing is also suffering. The services sector, which accounts for approximately 75% of the UK economy, is holding up though. It’s no secret the Bank is fearful about a no-deal Brexit, and should that play out, the central bank is likely to keep its options open in relation to interest-rate adjustments, and/or a government bond-buying scheme. While the UK stays in the EU, the Bank is unlikely to act.

Canadian retail sales (July) and Canadian inflation data (August)
Friday: The Canadian economy is in great shape for a western economy. The latest jobs repot underlines the strength of the country. The unemployment rate has held steady at 5.7%, and the employment change showed that over 80,000 jobs were added in August. The Bank of Canada (BoC) kept interest rates on hold at the beginning of the month, which was expected, but what stood out was the absence of dovish language. In recent months, the Reserve Bank of New Zealand and the Reserve Bank of Australia have cut rates. Some traders thought the BoC might move in a similar direction given the Canadian economy is also heavily exposed to the commodity sector. The latest reading of Canada’s inflation and retail sales were 2% and 0% respectively, suggesting mixed levels of demand.