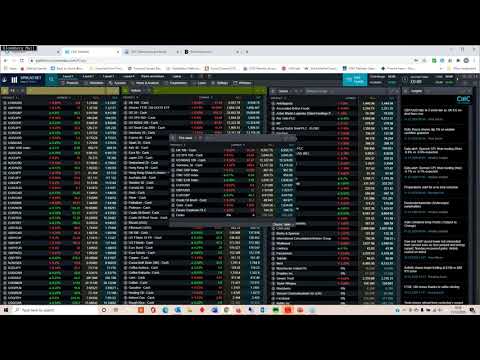 Watch our week ahead video preview, read our pick of the top stories to look out for (14-18 December), and view our key company earnings schedule.

Michael looks back at record highs in US markets and reaction to the ECB meeting, as well as the prospect of no trade deal between the UK and EU. He also previews the US Federal Reserve and Bank of England rate decisions, UK unemployment and retail sales. Michael also analyses the key chart points on GBP/USD, EUR/GBP, EUR/USD, FTSE 100, DAX, Brent Crude and the US dollar.

Tuesday: Retail sales growth in China appears to have finally achieved escape velocity, with three successive monthly gains since August. The November numbers are expected to lean in a similar direction, if the recent Chinese trade data is any guide. Recent PMI data has also been quite strong, and with the Golden Week holiday at the beginning of November, along with Singles Day, it’s quite likely that there’s been another decent month of retail sales growth.

The lack of a second wave thus far is helping to propel the Chinese economy into a much better second half of the year, after the woes of the February lockdown and the lacklustre Q2 rebound. Despite the optimism, Chinese retail sales still remain below the levels we saw at the end of last year, when they were at 8%, and they are still down 4.9% year-to-date. Industrial production is also expected to remain resilient it's already back at pre-pandemic levels at 6.9%.

Tuesday: Purplebricks CEO, Vic Darvey, has had a baptism of fire. Now over a year into the job, he has not only had to contend with the fallout of a pandemic, which sent the shares to a record low, but also the challenge of restructuring a business that had lost its way. In the summer the company announced the sale of its Canadian business for C$60.5m to Desjardins Group, as it continued to focus on its core UK market, having exited US and Australian operations.

In last year's full-year numbers, UK revenue fell 11% as a result of the pandemic. Since May, the level of economic activity has improved sharply, with the raising of the stamp duty threshold helping to boost the business during the first half of the year. Compared to last year, instructions have risen 8% from the same period in 2019/20, with a 20% increase for the five months since June. EBITDA is expected to come in ahead of company consensus of £3.5m. In contrast to Rightmove, Purplebricks’ shares have unperformed this year. They are still over 40% down year-to-date, which when you consider that it's one of the market-leading platforms for selling houses online, is a little disappointing. In the current environment the business, as well as the Purplebricks share price, ought to be doing better, however in such a competitive market place margins are extremely thin, particularly with the fixed-rate model.

Tuesday: The outlook for UK unemployment has started to look much bleaker in recent months, with some notable increases in the last three months or so. Since July, there’s been a big jump from 4.1% to 4.8% in September, and this is likely to continue to rise for several months to come. In the latest spending review, chancellor of the exchequer Rishi Sunak forecast that unemployment could peak in the second quarter of 2021 at 7.5%, and to that end the chancellor said that he would put aside £3bn to deliver a new three-year restart programme for those longer-term unemployed, in order to try and get them back into work. With the furlough scheme now extended into March, it's likely to have come too late for a lot of people in vulnerable jobs, given that a lot of employers decided to make a start on reducing headcount when the November lockdown was announced. The monthly jobless claims total is already running at 7.3%, a level which is likely to more accurately reflect where the UK jobs market is at the moment. There's a risk this could start to edge back up again with the numbers for November likely to tick higher, as a result of the tighter restrictions during the month.

Wednesday: Another retailer hit hard by the store shutdowns in the spring, Dixons Carphone posted a 51% fall in full-year profits in the summer, largely as a result of higher costs from store closures as a result of Covid-19, but also restructuring. Looking at the overall revenue numbers, the picture was more positive with a big increase in online sales, which helped offset some of the hit. The biggest impact was on mobile revenue, which saw a decline of £409m, sliding to a loss of £104m. These losses are expected to widen in this fiscal year, however mobile makes up just under 20% of total revenues. In the areas of the business which account for the other 80%, there was decent growth across the board. Since the record March lows the shares have recovered a good proportion of their lost ground year to date, but still remain 20% down on the year. However, a good pre-Christmas period and the news about a vaccine means that the outlook is much more positive than it was a couple of months ago, despite the November lockdowns.

Wednesday: At its last meeting, the FOMC were gathering in the immediate aftermath of the US presidential election, and hostage to events in respect of a coronavirus second wave, as well as political gridlock over a second stimulus package. One notable takeaway was that Fed chair, Jay Powell, was committed to the central bank doing more to support the economy, but he was also insistent that US policymakers needed to do more as soon as practically possible in the form of a new fiscal stimulus package.

In the wake of the recent weaker US non-farm payrolls number, there does appear to have been progress in this regard on Capitol Hill, with the discussions over a new $908bn stimulus package. With a new stimulus or economic aid package essential due to the expiry of unemployment benefits under the Cares Act at the end of this year, the Fed looks set for a much closer working relationship with the new US administration with the appointment of Powell’s predecessor, Janet Yellen as US treasury secretary.

Wednesday: A sharp rise in coronavirus cases across Europe has derailed the optimism that characterised the summer bounceback in economic activity in France and Germany. In the most recent November purchasing manager indices (PMIs), the numbers continued to paint a mixed picture for the German economy, with services slipping further into contraction territory at 46, from 49.5, while manufacturing remained resilient at 57.8, modestly down from 58.2, and close to levels last seen in March 2018. December is likely to be a different story given the limited restrictions that were extended into early next year. In France it’s been a similar picture, with services even weaker than in Germany, with a slide to 38.8 in November, and down sharply from the 46.5 in October. With restaurants and bars in France set to remain closed until next year, it's hard to see the case for any type of decent recovery any time soon, which means December is likely to see the fourth conservative month of contraction. Despite the positive vaccine news, lifting the mood from a markets point of view, it's clear that there will be no similar uptick in economic activity until restrictions are eased, perhaps sometime in the spring. On the plus side, manufacturing has been a strong performer for both Germany and France, helping to offset some of the slowdown on other parts of their economies.

Thursday: It’s been quite a year for the Bank of England; it has already cut rates from 0.75% to 0.1% as well as increasing its bond buying programme from £435bn to its current level of £875bn, with the last increase of £150bn taking place at the recent November meeting. There has been speculation for most of this year the bank might go down the negative rate route, however this still seems unlikely, irrespective of the outcome of the EU-UK trade talks. For now, the UK economy hasn’t experienced the same level of slowdown in economic activity in Q4 as in Q2, despite the various restrictions that are limiting output in the services sector. The central bank is likely to have a much better idea of the economic environment early next year, when we have a clear route map for vaccinations and also know the extent of the new EU-UK trade relationship.

Thursday: Parcels and logistics companies are generally good bellwethers of an economy, and FedEx is no different. In September, the company reported higher than expected profits as a result of lower fuel costs, and a big rise in shipments as a result of the increase in e-commerce, as more consumers shopped online. Average daily package volume increased 31% in Q1, as its aviation division, which was hit by the shutdowns earlier in the year, came back online. Revenue came in at $19.5bn, with profit at $4.87 a share in Q1.

The FedEx share price hit record highs earlier this month, on an expectation that this outperformance may well continue into next year, however pandemic safety measures have also seen costs rise and margins shrink. Another factor that may not be being considered is that the successful rollout of a vaccine next year could see shipments start to slip back a little, as consumers start to return to the shops. Expectations for Q2 are for profit to come in at $3.79.

Friday: Another US company that has seen its shares hit record highs this month, Nike has managed to ride out most of what the pandemic has thrown its way. In Q4 last year the company posted a loss of $790m, or $0.51 a share, on revenue of $6.31bn. This was a decline of 38% from a year before, due to the lockdowns across Europe and the US, which followed on from the disruption in China. The resilience in Nike's share price has been primarily driven by sharp rises in digital sales, which rose 82% in Q1, and 75% in Q4.

It has also become apparent that even though consumers are finding it more difficult to shop traditionally, retail sales growth has been fairly strong in most of its major markets since lockdown was relaxed back in May. With the Chinese economy also recovering strongly now, its Greater China business should also start to show much more resilience than was the case at the beginning of 2020. In Q1, sales in China rose by 6%, led by online sales, and this trend is expected to continue in Q2. Expectations are for profits to come in at $0.607 a share, which seems a little on the low side given that in Q1, profit came in at $0.95 a share.

Friday: Since the lockdown in April, there have been six consecutive months of decent gains, however after a surprisingly strong 1.2% rise in October, this could come to a shuddering halt due to the lockdown restrictions that were put in place from 5 November. The better-than-expected performance in the October numbers was in part fuelled by a pull forward effect from November, as consumers tried to do their pre-Christmas shopping before the lockdown began. It’s hard to estimate how bad the November numbers could be, given that a lot of shopping will have moved online, while there may have also been a significant amount of turnover in the lead-up to lockdown. The most recent BRC retail sales monitor showed a big fall in November, from a 5.2% rise in October, so that could be a decent leading indicator for this week’s number.