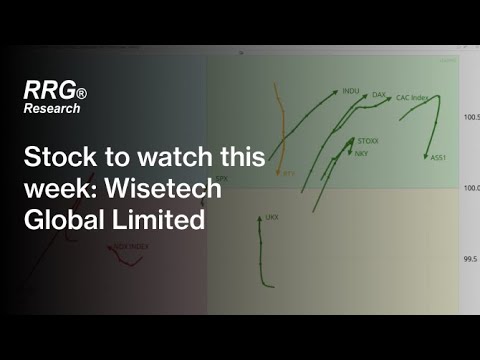 The weekly Relative Rotation Graph (RRG) below presents an interesting picture of the world’s leading stock markets. All but two of the indices we monitor are in the leading quadrant, indicating that most markets are outperforming our benchmark, the MSCI World Index (MXWO).

Entering the leading quadrant this week are the FTSE 100 (UKX), S&P 500 (SPX), France’s CAC, Germany’s DAX and the pan-European STOXX. Their movement into the chart’s north-eastern sector means that they are gaining on both axes and are in a relative uptrend versus the MSCI, pushed higher by strong momentum.

The length of the arrow corresponds to the strength of the move, so long arrows represent a more powerful move than short arrows. The standout performers are therefore Australia’s ASX (AS51), while Japan’s Nikkei (NKY) also remains strong. In contrast, the Nasdaq 100 (NDX) is in a downturn, heading towards the laggard of the pack, Hong Kong’s Hang Seng Index (HSI).

After slumping to 6,400, Australia’s ASX 200 rallied strongly off that support level and appears to be climbing towards the resistance level of roughly 7,100 that was set in July. A break above the two short-term tops at 6,800 would underscore the index’s strength, potentially triggering a rally towards that 7,100 area.

The lower part of the above chart shows that the moving average convergence/divergence (MACD) line is moving up strongly, followed by its signal line. The gap is widening, indicating strong positive momentum for the ASX 200.

The third-placed company in our ranking of leading stocks to watch last week – logistics software firm WiseTech Global [WTC] – has kicked on, based on our analysis of the Australian market. What’s more, the stock looks to have further upside potential.

WiseTech’s price chart, above, shows that the uptrend from the July low – which culminated in the stock topping $60 – has been broken. The recent high at $58 was the first lower high after that break. The rally towards that lower high emerged from a test of support just above $52. The peak was completed with an “island reversal” – a cluster of one or more candles with a gap going in and a gap coming out, setting the candles apart, without overlap, from the rest of the chart. This pattern is usually a weak formation that points to lower prices. The island reversal seems to have wreaked its havoc, with the fall that followed taking the stock down to $50.50.

However, WTC has since rallied again, climbing back up to $58.40. Since the dip to the $50.50 low at the start of the month, the stock has displayed a rising-low pattern. The price action now looks like an “ascending triangle” – usually a bullish formation. A break above the two tops at $58.50 would confirm it. The ascent of the MACD line, which has broken up through its signal line, offers a further indication of positive momentum.